It's mine, it's finally mine! After searching for years I managed to finally pick up A Hero Never Dies on laserdisc. While the laserdisc format is pretty much undeniably cool, in terms of pure quality it often lags behind dvd. In this instance though the laserdisc is preferable to the atrocious Universe dvd, as it has none of the horrible digital smearing the dvd suffered from, so while it's far from the presentation the film deserves, this will be my format of choice from now on for viewing the film (at least until a remaster comes along). 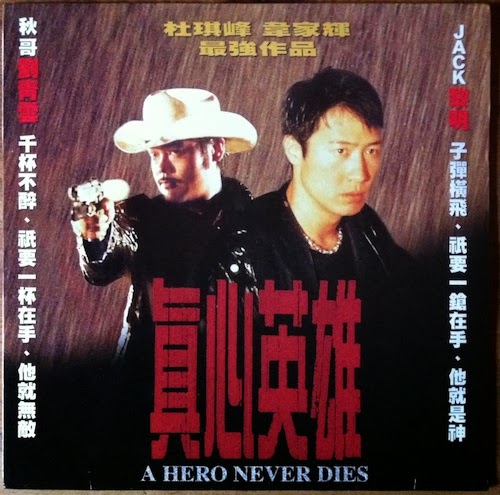 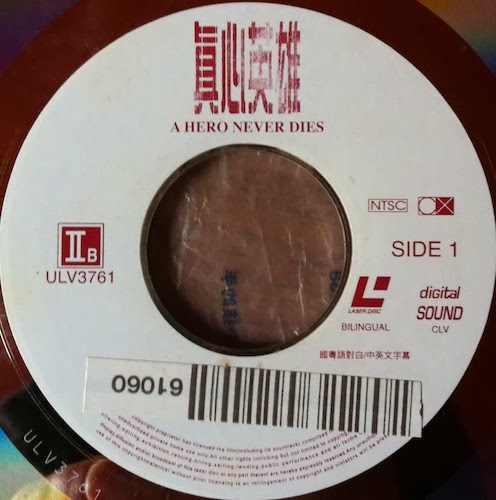 The laserdisc must have been released sometime in early 1999, and it made me wonder what was the final movie to be released in Hong Kong on the format? A quick google search revealed the last movie to be released anywhere on ld was the HK film Tokyo Raiders, but that was a Japanese release, do any of you laserdisc experts know? 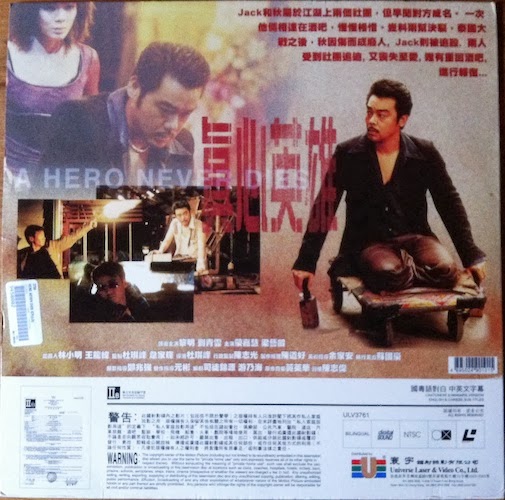 Fantastic find! I don't have this. I never even saw it in my LD collecting days.

Mart, I love the way you're still mixing up laserdisc and DVD/Blu, very cool... This is as good a time as any to ask about the title of this blog. Being a HK Cinema novice, A Hero Never Dies is first and foremost the name of this blog. But it also happens to be a Johnnie To film as I later discovered ! Seriously though, had you ever considered any other titles for the blog ? I made my one up in the space of 5mins and before I knew it I was launched into cyberspace with one of the dumbest blog titles around - the stupid thing is impossible to spell !

Thanks Phantom, pretty sure it must have been one of the last discs released in HK. Almost everyone would have been onto dvd by the time it was released, including me.

Wes, I'd spent ages trying to come up with a name, when it popped into my head to use the title of one of my favourite movies, which not only sounds cool, but is also a comment on HK genre cinema. Once I had the name I was ready to go. It's also easy to spell!

Oddly enough, when i was coming up with a name for my blog, A Hero Never Dies was something that popped in my head. I did a quick google search to find out it's been taken by you good sir. And a good find the blog was too.