Wong Hei Dak's The Desperados belongs to the "Mainland invader" genre of Hong Kong cinema, and mines similar territory to Johnny Mak's classic Long Arm Of The Law. Wong's effort may have arrived four years earlier, but The Desperados lacks both the subtleties and visceral impact of Mak's film.

The film opens with Cheng (Kenny Bee) dodging shark attacks (set to the Jaws theme!) as he and a group of other refugees try to enter Hong Kong illegally. Once past the sharks Cheng finds that was the easy part, as he discovers the grass isn't always greener. He falls for another refugee (Cecilia Wong), who had triad help getting into Hong Kong resulting in ever mounting debts for her family. In need of cash, Cheng and his friends turn to armed robbery, and he ends up in prison. Once out and trying to go straight, Cheng finds things are even tougher, as he's unable to find work, how long before thoughts turn back to crime? 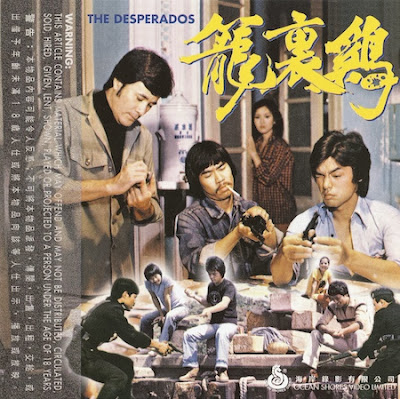 I'm sure the filmmakers had good intentions for The Desperados, trying to highlight the plight of the mainlanders desperate to get into Hong Kong and what becomes of them once they're there. However the lack of subtlety kills any serious intent the film may have had. The script packs in a catalogue of incidents so long that nothing is given chance to breathe and thus resonate. It has the effect of being like a child's storytelling, in a "and then this happened, and then this happened next" way. As amusing as the opening shark sequence is (not only with the Jaws music but some of the worst intercutting of stock footage I've ever seen), the film never quite manages to recover from it enough to be taken seriously. This is in spite of a reasonable performance from Kenny Bee as the naive and easily led Cheng. 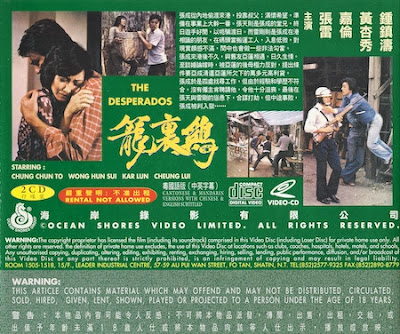 By the end of the film my mind had drifted to thinking that either the script writer or the director (who never directed another movie) have serious issues with their mother, as both "mother" characters in the movie are completely and utterly vile. The film only ever really comes to life during it's infrequent moments of violence, which unfortunately aren't enough to raise it into the recommended category, even for fans of the genre.

Viewed via the Ocean Shores vcd, which unusually features two endings one for the Hong Kong audience and the other for Mainland consumption. For some reason the Mainland one comes first, which rather ruins the effect of the Hong Kong ending.
Posted by A hero never dies at 6:58 PM