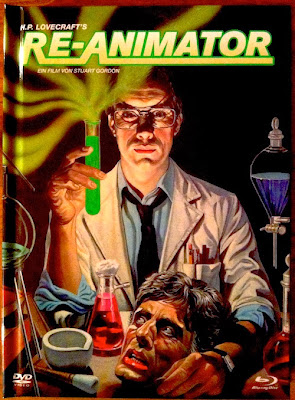 Last year Image Entertainment were responsible for releasing Stuart Gordon's Re-Animator on blu ray. Unfortunately, they didn't do a very good job of it. On anything but the largest screens it was hard to tell the difference between it and the upscaled standard definition dvd. When news came through of a brand new transfer taken from 35mm film elements, I got all excited again... 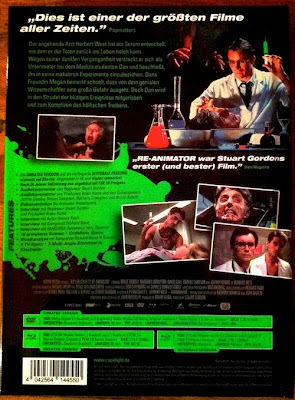 This German mediabook is the result, a superbly presented 3 disc edition of one of my favourite films. Consisting of 2 blu rays and a dvd it features 3 different cuts of the film, the original unrated version, the so called intergral version which adds all the extra footage (used to bump up the running time of the R rated version after all the gore and nudity were cut out) into the unrated cut, and lastly the R rated version in SD as an extra. The difference between this new version and the Image release is vast, and it's difficult to imagine Gordon's film could ever look any better, although how many times is that said? Anyway for much more info take a look at Kentai's look at the disc. 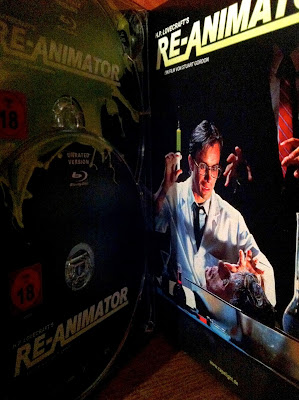 To round the package off, the set includes two commentaries, the documentary Re-Animator Ressurectus, interviews, deleted scenes etc, etc, just about everything the fan could ask for really. If you want to pick up this release, you'd better be quick as once the initial run sells out that will be it, future versions will lose the extra blu ray and the fancy packaging. Second Sight will be using this new transfer for their blu ray release in the UK early next year, but it's doubtful it will be as comprehensive a package. A new Spanish release comes as a 5 disc set, consisting of a blu ray, three dvds and a cd of the score, however unconfirmed reports suggest this uses the Image transfer, which was more than enough to put me off, I'll update if I find out differently.

Just as an aside, the company that released this, Capelight, is also the German rights holder for Fukasaku's Battle Royale. Now, last year some punkass court in Germany decided it would be fun to take a break from, you know, percecuting actual crimes and instead ban this classic on the grounds if it "glorifying violence" (other films which were banned because of this ridiculous law included "Dawn Of The Dead", "The Evil Dead", "The Texas Chainsaw Massacre", "Story Of Ricky" and, if you'll believe it, the BBFC 15-rated "Phantasm"). Thankfully, Capelight had the balls to fight the court's decision and won on appeal. They're a model for other DVD labels!

Nice to hear from you NH! It's all relative I suppose but Germany seems to be a weird place as far as censorship goes. With many films being heavily cut, while the option is there to release them uncut. To ban BR is beyond weird. The UK used to be horrendous for it as is well documented (and if any number of politicians had their way it would be again), but at the moment the BBFC gets most things pretty much right. As for Capelight, more power to them.

Thanks, Hero, nice to have you back!

The main reason why this („films being heavily cut, while the option is there to release them uncut") happens is that these films, in their uncut form, have been blacklisted by the BPJM. The BPJM is a German government agency that is tasked to determine whether certain media is harmful to minors. If the BPJM deems a film harmful, it is put on the so-called "Index" (= the BPJM's blacklist). Once blacklisted, these films become strictly under the counter stuff, akin to hardcore pornography. Advertising or even MENTIONING (which could be considered an advertisement) these films in any sort of publication is strictly prohibited. This is VERY strictly enforced: If for example a games magazine features a review of a certain title and that title happens to get blacklisted while the magazine is still out in the newsstands, a judge might very well issue an order to confiscate every single copy of the magazine in question (this is usually accompanied by a police raid on the magazine‘s publisher). The only way for a company to circumvent this outrageous PR-ban is to release a chopped-up version to let potential buyers know that this thing exists.

Another more and more common reason would be the unwillingness of the distributor to pay money for a rating twice. Rather than risking to have their film rejected by the FSK (which is the German equivalent of the BBFC) upon first submission (therefore risking to become the subject of a BPJM investigation), they just cut out everything that might be deemed offensive, just in case.

Considering this, I'd be most inclined to agree that the BBFC is an institution you can live with. Even before they considerably loosened up their guidelines in the early 2000s, I thought that, while they usually gave stricter ratings than their German counterparts (18 ratings are handed out fairly liberally by the BBFC), they seemed much more reluctant to cut stuff. They are also pretty open about their guidelines, while in Germany, censorship under the guise of protecting the youth can be (ab)used fairly arbitrarily. The only thing that ever really irked me about the BBFC is that it was at their behest that the early James Bonds got cut up way back when.

Just as a side note, to tie all this to the Capelight release of Re-Animator: That particular film was also on the BPJM blacklist. Those blacklistings only count for, I believe, 25 years, after which they have the option to either permanently delist or relist a film for another 25 years. In the case of Re-Animator, it was delisted ahead of time after Capelight asked the film to be reexamined (Which doesn‘t come cheap, I assure you! This is why most companies usually don‘t bother.)

Thank you for taking the time out to explain that, and in such depth too, very interesting.

It reads very much like the US X or NC-17 rating in the US, but with tighter restrictions. I take it that it is legal to sell them then, even if you cannot advertise them? Are there "specialist" stores for them?

You're welcome! It's always nice to have an oppourtunity to divulge the sort of oppressive red tape nightmare that labels in Germany will have to face when releasing a title such as "Re-Animator".

Just as an aside, about 90% of what is commonly referred to as the heroic bloodshed genre remains blacklisted in Germany to this day. This includes John Woo's entire output (ranging from "Heroes shed no tears" up to and including "Hard Target") among countless other titles.