As you may have noticed it's been quite a while since my last post. Why? Well as I mentioned on facebook last week, after a long time feeling down and out, I'm back and (relatively) fighting fit, and as the post title suggests ready to resume normal service. After months of limping along trying to update the blog while not in a fit state, I decided a complete break was required for me to get my strength back, so here I am and I'm feeling pretty good for the first time in ages and ready to get back down to some serious blogging! I can't promise the same pace of updates as before, but hopefully lower frequency will equal higher quality. While I'm on the subject I'd just like to thank those of you who took the time out to check in on me, thank you! 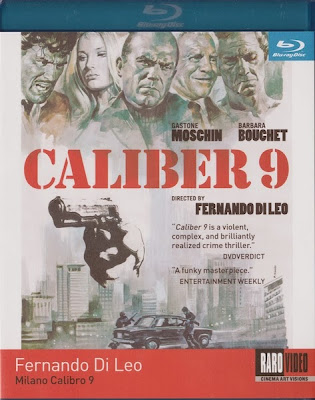 While I've been away I've spent many an hour revisiting the giallo movies that helped me get hooked on cinema in the first place, along with plenty of Eurocrime films I hadn't seen before. Top of the pile in that particular category is Fernando Di Leo's Milano Calibro 9 from the Fernando Di Leo box set volume 1. Since first seeing it around six months ago, I've watched it at least another five times so far and it's comfortably my favourite film seen this year, as a result I've developed a real case of man love for Gastone Moschin. In addition, I've equally fallen for Di Leo's Shoot First, Die Later from volume 2, both are highly recommended. Look out for some form of coverage on them soon.


What else do I have planned? Well, I've finally got my hands on the Bullet In The Head festival cut, thanks to one of my supercool readers, so it would be rude not to do something with that. I have an idea for a new occasional series, but the details need ironing out on that one, and I have loads more posters and other goodies to share with you, having finally had all of them out and taken pics of them. I'd love to know what everyone else has been doing, what have you been watching etc???
Posted by A hero never dies at 5:21 PM

Thanks Mark, I know that but it's great of you to say!

You know how long I've been waiting to read your stuff again? ;)
Glad to have you back. Caliber 9 sounds awesome. Need to see this ASAP. Not sure if it's readily available in the states though. I'm gonna try though!

Thanks rG, Caliber 9 is available from raro video in the US. Look out for it on Amazon, during the last black friday sale they had the 4 disc set for $12.98. Crazy value!

Welcome back Hero!
I've made the first post in about a year.And catching up with the criterions for Branded to Kill and Tokyo Drifter.

Finally seeing Drug War this week. Have you seen it yet?

Thanks A. and welcome back yourself, I missed your post, I'll check it out as soon as I finish typing this. Would love to hear your thoughts on the two Suzuki's. As for Drug War, it's pretty clever in getting around the censorship issues, and was very solid without completely blowing me away. It has some memorable characters though and Louis Koo was great.

Glad to see you back, dear.

Gastone Moschin - I will stab any person who does not love him.

Thanks Sylvia, I'm definitely safe then as far as my man Moschin is concerned!

Great to see you back Mart. I'm suffering thru some downtime on my own blog at the moment so that explains my late late comment. I wanted to mail you a few times but I felt I might have been hounding you so I let it lie. But relieved and glad to see you on good form again !

Thanks Wes, you're always welcome around these parts, by email, comments or carrier pigeon if you prefer. It feels good to be back!

Truly some of the great art ever.