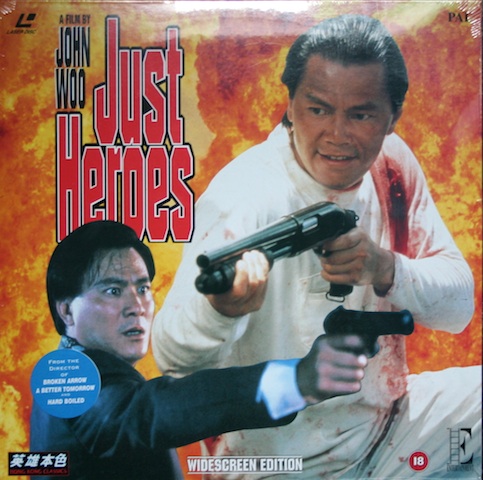 Hong Kong Classics/Encore UK laserdisc for Just Heroes. A film made as a benefit for the legendary director Chang Cheh, produced by Tsui Hark, and with John Woo and Wu Ma co-directing. The film is a bit of a rushed mess, but it's entertaining enough and the trademark Woo gunplay is all present and correct. The film has an interesting cast too, featuring several stars of the Shaw era including David Chiang and Danny Lee, and the then up and coming Stephen Chow.

Just Heroes has never had a Hong Kong dvd release, there is a French release where it is paired with Once A Thief on the HK Video label, unfortunately it doesn't have English subtitles. Leaving this laserdisc the best option for anyone requiring an English option.

Although laserdisc was never anywhere near a mass market product in the UK discs could be found in most stores like HMV and Virgin. It was too little too late for the format however, and it wasn't long before dvd stamped on what little fight the 12" silver disc had. Back when stores were practically giving laserdiscs away in order to make shelf space for dvds, I had the option to pick up Just Heroes for £4.99, but as money was really tight back then had to choose between this and the newly released vcd of Stephen Chow's King Of Comedy. I went with the Chow film (which I loved) and I've been searching for this since, so it was great to finally get it for the princely sum of 99p plus postage, it was brand new and sealed too. 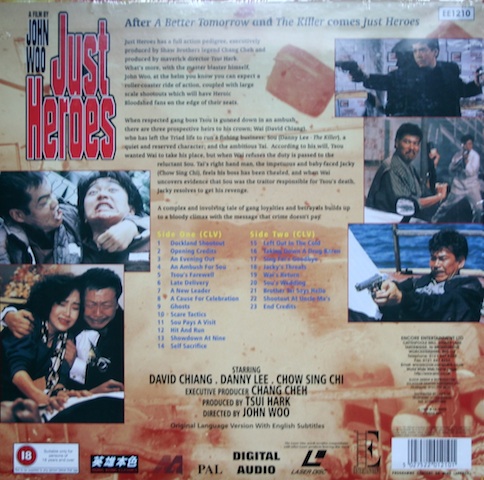 99p!! Congrats on that!! I have a copy of the same LD release (and the vhs version as well). Phantom of Pulp mentioned on my blog that there also a HK LD with English subs - but it carries the cut HK cinema version! So this uncut LD is as you said the best English friendly option.

For my own ramblings about the release:
http://enlejemordersertilbage.blogspot.dk/2009/04/john-woos-forgotten-classic.html

I didn't know there was an HK ld release until Ken B. mentioned it was cut on facebook. I was really pleased to be able to pick this up, really underrated, though not by all the cool kids.

I guess Wu Ma doesn't have the same selling-appeal, does he?

You could be onto something there A...

I guess nobody consider "FROM DIRECTOR WU MA...and that Woo guy"

The HK LD has violence cuts, and is missing a flashback scene.

French DVD is intact, but, as you said, non-subtitled.

Another great score, too, from the Diaz/Wong duo, who did BULLET.

If only somebody would release a JUST HEROES/BULLET double CD. The master tapes must exist!