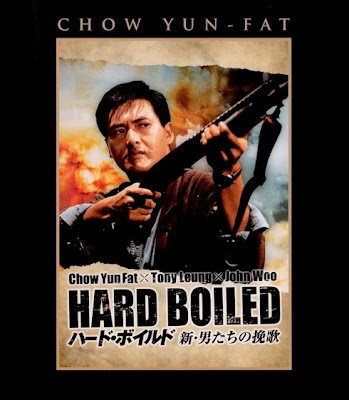 Remember the Japanese blu ray of Hard Boiled I posted about? Of course you do, it's all I've gone on about lately! As good as the disc is it isn't without problems, being too bright, it doesn't have English subtitles and it's slightly cropped. This is how I got around the first two of these issues (nothing I could do about the slight cropping, however it's not really that much of an issue), and came up with what is almost the definitive video presentation of Woo's action classic. In addition, I've removed the 5.1 DTS audio and replaced it with the original PCM mono sound from the US laserdisc, which sounds superb. A big thank you to Matt for the file and advice.

The first job was to rip the film from the blu ray, a number of programs can do this, but my choice is AnydvdHD from Slysoft. It removes any protection from the disc and stores the file on your hard drive as is. Once this was complete I took the subtitles from the UK Tartan dvd release, which is by far the best translation available. In order to do this I used AnydvdHD once again to rip the dvd and then DSubtitler to extract the sub file from the data. Once this is done the dvd files were deleted.

With video and subtitles both ripped, the next job was to get the subtitle file to sync with the video as I knew the two would not match. This is as a result of the blu ray being encoded at 23.97 frames per second and the dvd being 25 fps, so as the video goes on the sync drifts further and further out. In order to correct this I used Subtitle Edit, this allows you to automatically change the subtitle file from the original speed to whatever you need it to be, in this case 25 fps to 23.97 fps. To test the results I fired up VLC and played the two files together. Weirdly they were still around a second out, why I don't know, but it was easily rectified in the Subtitle Edit software as you can time shift the subs in fractions of seconds in either direction. Once they matched the next job was to darken the video.

Many programs will allow you to change the brightness and contrast settings before re-encoding the video, but I used Xmedia Recode. After adding the blu ray data you choose how you want to output the video in this case as an mkv file, make the adjustments you require and then click go, and then wait and wait and wait. If I can give you any advice don't use a woefully underpowered media PC to do this part of the job. 183536 individual frames to process at an average of 1.81 fps, it took almost 30 hours to complete! 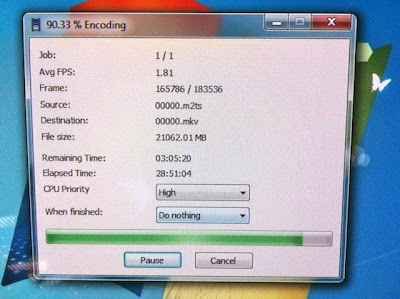 Once you have your completed mkv file the last job is to put everything together and for this you need Tsmuxer, an excellent, versatile program that allows you to add subtitles and audio tracks to an existing video file. To start the process I added the mkv file which brings up a list of the video, audio and subtitle tracks already part of the file. From here you can delete anything you don't want and add what you do, so I added the PCM soundtrack and the retimed Tartan subs. Once you're happy, choose how you want to output the file, click start and wait as the program merges everything together. Thankfully as this doesn't re-encode the video it only took about twenty minutes to complete. The result? An almost perfect version of Hard Boiled. Happy days!

Time for some screencaps, although I'm not a fan of judging a video image by screencaps they can be useful to highlight obvious differences. The top cap is the Tartan dvd upscaled to 1920 by 1080, the middle cap is the Japanese blu ray as is and the bottom cap is my tweaked version. All have the same level of jpeg compression and I've tried to match the frames as closely as possible, it's a tricky task and unfortunately I'm not perfect, but I think you'll get the idea. As you will probably notice from the screen captures, some scenes have a different look with much of the blue tint toned down, and although a few purists may disagree to my eyes it actually makes the film look significantly better by giving the detail and colours more of a chance to shine. 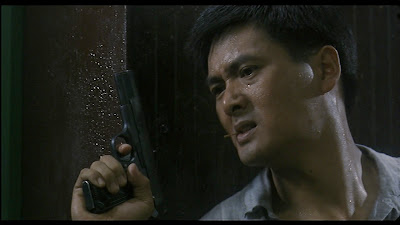 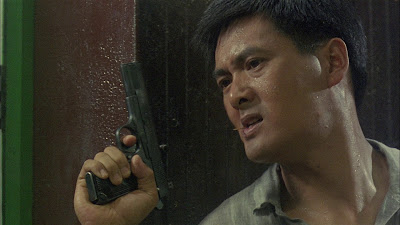 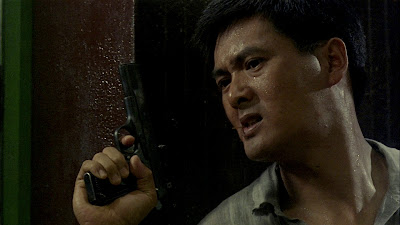 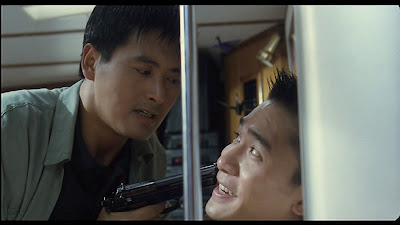 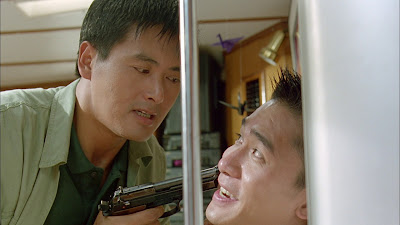 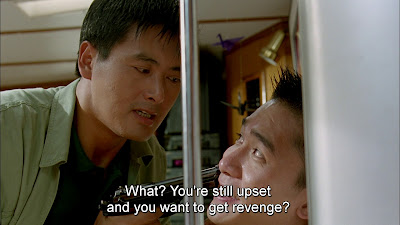 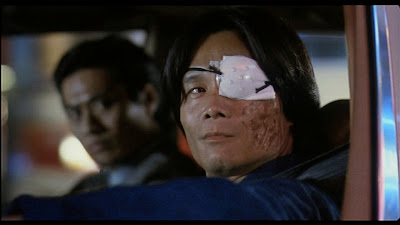 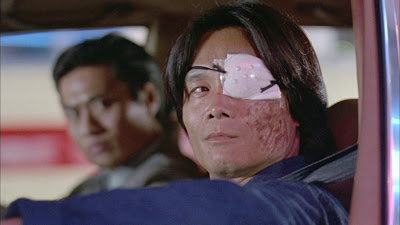 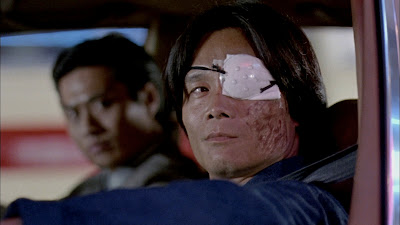 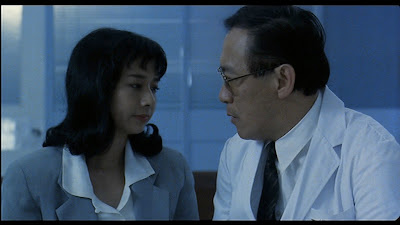 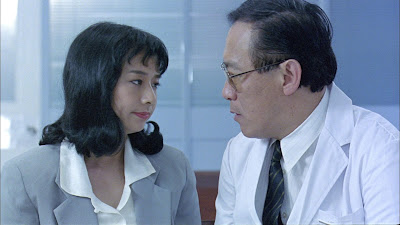 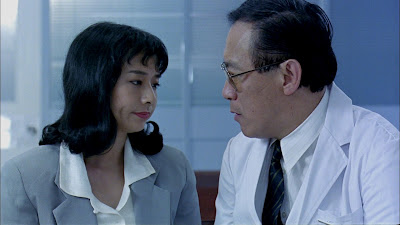 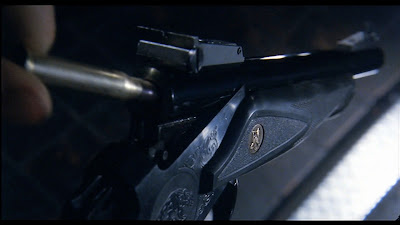 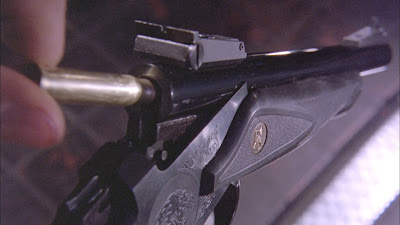 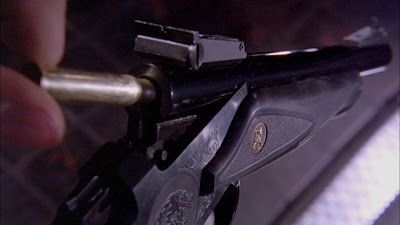 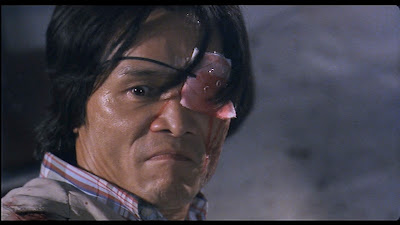 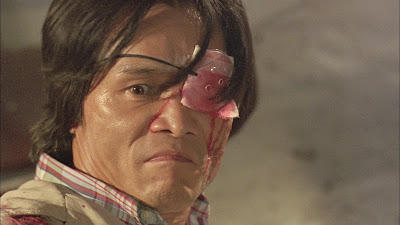 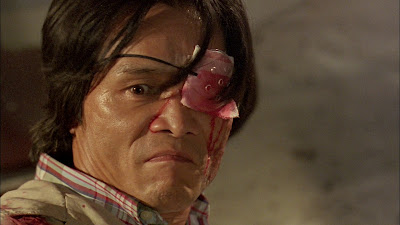 So, when I say almost perfect, I'm going to look into the possibility of changing the brightness on a per scene basis as a couple of sequences are overly dark after my tweaks. The resulting image is still way superior to the actual disc, but after putting so much effort into this thing I need it to be absolutely the best it can be. Stay tuned!

You're to be commended, Hero, for a superb attempt at HARD-BOILED perfection.

Thanks Phantom, not quite there yet but close!

Mart, that's pretty amazing I must say, I wish I had that kind of savvy. I have two outstanding jobs to do on two .avi files I obtained a few years ago - Frank Zappa's 1971 film 200 Motels and a very rare Psychic TV video First Transmissions - both have synchronicity problems where the audio is ahead/behind the image. I think I did find a freeware program to correct them but it was too damn difficult for my feeble untechnical brain. Still, this post has inspired to take another shot at it...

Thanks Wes, it was easier than it sounds, the things you can do with a PC these days. Honestly, when this is what you can achieve at home, what kind of excuse do the companies who release movies have for poor product?

Let me know how you get on with your projects.

Hey, you're welcome. :) It was hard work, but worth it. And word has been getting around.