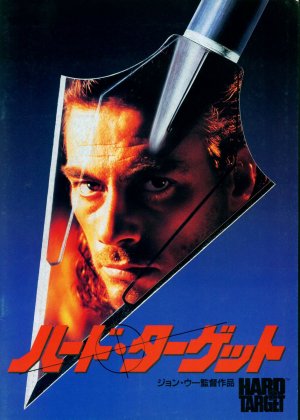 How naive was I back in 1993? Enough to be insanely excited about John Woo going to Hollywood and making his first movie there, Hard Target. Even the presence of Jean Claude Van Damme could do little to dampen my enthusiasm. Inevitably I was disappointed by the film on it's release, not that I thought it was a terrible movie you understand, just that it was more JCVD than John Woo. It felt like Woo had been let down by the producers who had courted him so determinedly. My subsequent viewings have been kinder to the film and in it's released form, it remains Van Damme's best film and a solid action movie.

The released version of Hard Target always felt compromised, and rumours of not only studio interference but Van Damme himself demanding changes were rife. As is usually the case in a situation like this it wasn't long before talk began of a "director's cut" of the film, although I doubt anyone thought we would ever actually get to see it. Now almost twenty years later, I finally got to see it thanks to fellow blogger Ingo. 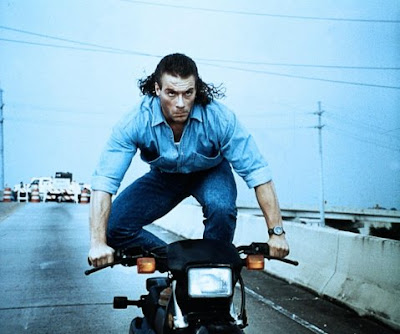 So how does the "Workprint" (as it's called) compare? Well firstly as you would probably expect the quality isn't great, coming from at a guess, a fourth or even fifth generation VHS copy and riddled with the flaws inherent to the format. Putting quality issues aside, it's fascinating comparing the two versions, the workprint runs approximately 117 minutes against the released cut at 97 minutes (apparently there exists a third variant that runs even longer at 127 minutes, which I haven't seen to compare). The extra footage being a mix of character and plot enhancements and of course extended action sequences, most notably during the finale. The result? Well it certainly has the John Woo signature lacking in the shorter cut, which is extremely welcome, however it isn't all good news as regrettably some of the additions just don't work. Woo went from working with fantastic, charismatic actors like Chow Yun Fat and Tony Leung, stars who almost instinctively knew what was required of them, to working with, to put it kindly, more limited performers such as JCVD and Yancy Butler. Factor in communication problems caused by the language barrier and certain scenes were always going to be awkward, love scene I'm looking at you!

The good news are the action sequences. The final warehouse scene in particular is on a wholly different level in terms of intensity and all round mayhem in the longer version, and most definitely worth the effort of tracking this down.

I remember reading an article in the UK magazine Sight and Sound about Hard Target, where the writer called the film "the first art-house action film" or words to that effect, and while the intent may have been there, unfortunately the execution is lacking. In the end neither version is ideal and I would suggest a further variant of something in between these two cuts would be the closest thing to a definitive version. A cut that keeps, for want of a better word, the Woo-ness in terms of the thematics and violence of the workprint, but trims the fat of it's more awkward moments. I guess we're unlikely to ever see that, but it would be nice for Woo to get a chance to deliver his own cut of the movie for everyone to see, and it is the 20th anniversary this year, hint hint...

I had the work print, bought at a comic convention probably right after the movie came out. It even had a time code at the bottom. I don't know what happened to that tape. My wife probably tossed it in her VHS purge. Damn...

A shame Jay, do you remember what you thought of it?

I loved it, love Woo and there is a lot of cool stuff in Hard Target mixed with some weak stuff. Isn't there a weird scene of like animal hunting while the villain plays piano?

Yes Jay, a lion if I remember correctly. I liked that scene, but totally understand why it was cut, your average moviegoer would have just laughed at it.

Excellent stuff Mart, I've often heard of this Workprint and wondered how different the film would play out. I'm trying to think what was my first Woo - whether it was Hardboiled (courtesy of the very fine special edition Tartan VHS) or Hard Target. My memory is fuzzy but I'm leaning towards Hardboiled, I seem to remember being disappointed by Hard Target, although I'd love to see it again - I'm sure that rental screening was the one and only time I saw the film... Foreign directors and their Hollywood debuts would make for an interesting post - I imagine Hard Target would be a typical example - that siphoning off of a film maker's talent seems inevitable amid the turbulence of big studio politics. I must admit, aside from Hard Target, Broken Arrow and Face/Off (which I truly despise!) I haven't seen any other of John Woo's American films.

Van Damme's best film with his worst haircut. I'll never get over that intro scene where they zoom in on Van Damme's earring to show what a "badass" he is. Ah well. I always felt like the poster was trying to hide his mullet as well.

Hard Target is really fascinating though in terms of Woo's career. I've never seen the workprint (I know a couple versions have shown up on YouTube) but I'm still curious about early screenings of the film where the audience (who wanted a Van Damme film) just laughed at a lot of the scenes that would've made more sense if it were a Hong Kong production with Woo in full control. Not to mention the film has other problems outside of Woo. Yancy Butler (if you've managed to see any of her other films) seems pretty uncomfortable about playing a damsel in distress, and I don't blame her. All her TV work has her playing these really bulked up masculine characters.

I think the reaction to Hard Target hit Woo hard and lead him to wanting to try to make more American-oriented productions in his other films. Especially his early experiments with CG in Broken Arrow.

Does the un-cut print have the rumored dancing scene that Van Damme does with Wilford Brimley?

Thanks Wes. It really is a different film, an odd mix of Woo and writers trying to imitate him, with an unhealthy dash of actor and studio interference!

I first saw it on my birthday in 1993, and came out of the cinema with a confusing mix of exhilaration at seeing Woo achieve his dream of making a Hollywood movie, and disappointment that it wasn't Hard Boiled. Like I said how naive?

Come on now Wes I need an explanation on Face/Off, despise is a strong word!

It was my favourite of his US work for many years, but over time I've come to really love MI2. While hardly a masterpiece, some of the filmmaking is superb and it feels the most Woo like to me. It amazes me that all the actors in Hollywood aren't onto their agents trying to get him to direct every film they're in, nobody makes actors look as good on screen, from Van Damme to Cruise and everyone in between. While watching MI2 I look at Thandie Newton and see one of the most beautiful women I've ever seen.

A. Embrace the mullet!

I'm in full agreement on Hard Target, many of the scenes in the longer cut would have been laughed off screen by many audiences, let alone hardcore Van Damme fans, which is a shame but unavoidable really with someone like him. I wonder how it would have been with an actor who could have gone toe to toe with Lance Henriksen. As I said I do still like the film, but it was a definite missed opportunity, I can't imagine anyone seeing Hard Target as there first Woo film believing the hype surrounding him at the time.

I'm sure it did hit him hard, from having full control on a shoot like Hard Boiled to being told what he can and can't do by an endless tide of suits and his star.

The song and dance scene is in this version, albeit very short, apparently it's a little longer in the longest cut of the film. Check your twitter for a pic!

i have the 127min workprint

soldierslake2 or first blood fan edit version...I have been looking for the 127 minute version for years! I would love to purchase a copy of it from either of you guys,or if you genteleman may be able to provide a site where I may be able to order it from, very greatly appreciated!....please help a fellow action fan!!

soooooo.....did this ever turn up? someone have a link to dl it? i see the blu-ray UK version has 7 minutes restored but i'd like to see the whole thing for curiosities sake. thanks!

I've always thought that if Daniel Day-Lewis (with his long hair intact) had been in this movie, it would have been taken more seriously from both audiences and critics alike.