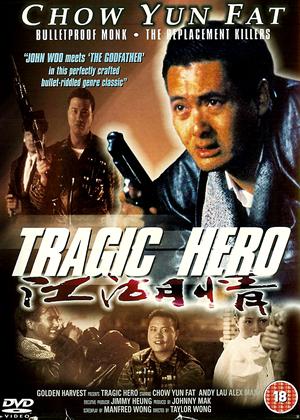 Having recently viewed Taylor Wong's Tragic Hero again I checked the extra features on the UK M.I.A dvd, where I found an international trailer for the film, retitled as Black Vengeance. I'd never come across this before and a quick Youtube search turned up nothing, so I thought it was worth posting it as I found it very amusing.


Here is the link to see it in better quality.

Not only is the dubbing hilarious (most of the cast sound like they're in a spaghetti western, with gunshots to match), but the style of the voiceover guy seems more suited to a mondo movie from the 60's than a Chow Yun Fat starring heroic bloodshed movie from the late 80's. Considering the date on the card at the end of the trailer says 1994, it seems all the more bizarre that it's so old fashioned.

I wonder if the film played anywhere like this? A quick look on the IMDB shows an image on the Tragic Hero page titled Black Vengeance, but it's from a budget blaxploitation 4 film pack dvd release, completely unrelated to Tragic Hero. Checking the HKMDB fails to mention Black Vengeance as an alternate title. Anyone?

wtf. there are clips from the second film in there too. even more wtf.

This is an excellent find!