Back in the mid 90's Rick Baker's Eastern Heroes magazine was an invaluable source of information for fans of Hong Kong cinema in the UK. In those pre-internet days it was difficult to find out anything about new releases in HK, so each issue of Eastern Heroes magazine was an eagerly awaited event. In addition to the publishing side of the business, they also did video distribution, and while Made In Hong Kong had the majority of the better titles, Eastern Heroes put out a number of interesting titles of their own. Which brings me to the topic of this post, the combination of magazine and video, with Eastern Heroes The Video Magazine Issue 1. 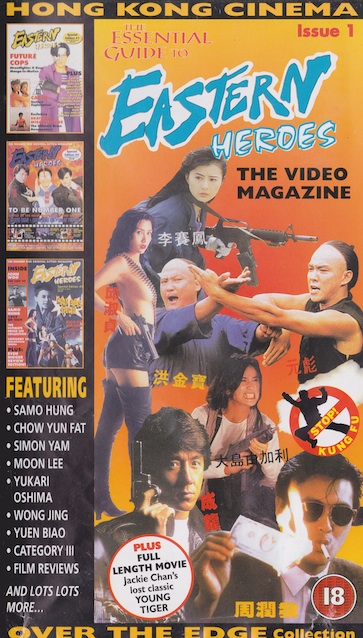 Although the video magazine was an intriguing idea to me, that being a number of short interviews/articles covering different aspects of HK cinema followed by a film at the end of the tape, at the time of release I didn't pick up either of the two issues that were released (a third was promoted but as far as I can tell never released). At that time I was newly married, money was tight and what I did have went on buying actual films. Another issue that prevented me giving them a shot was the possibility that they would be just a long promo piece for Rick Baker, Eastern Heroes and their movie releases. It would be harsh to blame him for the self promotion I suppose after all, thanks to John Woo, Chow Yun Fat, Jackie Chan and others, Hong Kong cinema probably hadn't had the kind of exposure it was receiving in the UK ever before, and certainly not since Bruce Lee exploded into the public consciousness. I just didn't want to pay to see that.

So now with Eastern Heroes about to re-launch, I thought it would be a good time to give the video mag a viewing, 18 years late! I'm going to break down the magazine into it's parts, with a few words about each segment.

The magazine begins with a short introduction from Rick Baker, taped in front of a selection of HK movie posters. 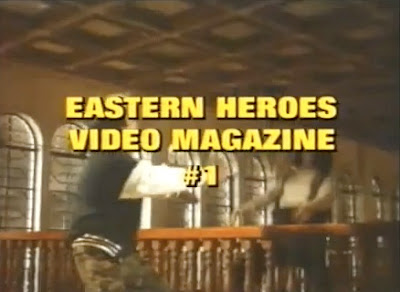 Brief interviews with Sammo Hung and Yuen Biao follow. This section is a little over padded with clips, but Yuen in particular is pretty enthusiastic here. These interviews are available to view on youtube if you are interested.

One of the best parts on the tape comes next, titled Hong Kong video and laserdisc update. It begins with footage of Rick Baker sweating buckets in front of a night market stall full of VHS tapes, before moving into a video store where Rick chats with the store's owner. The conversation covers the HK market, what makes for a popular title and the split in users between VHS and laserdisc at the time. He also explains the criteria for making the decision on how some movies were spread over two laserdiscs despite comfortably fitting on one.

Next up is Wong Jing, who according to Baker "Could be the next contender for Hollywood", imagine that! He chats about God Of Gamblers and Nat Chan Pak Cheung. Again the segment is overly padded with clips, but I'll forgive it in this case as it has an hilariously dubbed clip from Magic Crystal. 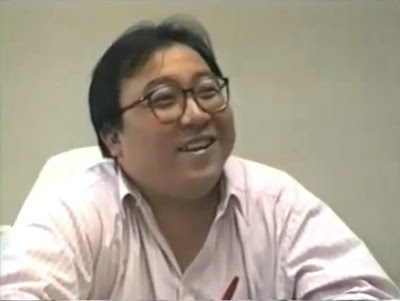 A brief interview with Godfrey Ho follows, which is little more than an interrupted advert for Ho's Lethal Panther, released in the UK by guess who? Yes you got it, Eastern Heroes, re-titled as Deadly China Dolls.

Another good segment, Girls with guns features interviews with Yukari Oshima and Moon Lee. It's great to see them being interviewed, and Moon in particular is charming. Plenty of clip padding again, but some excellent scenes are chosen so you won't mind. 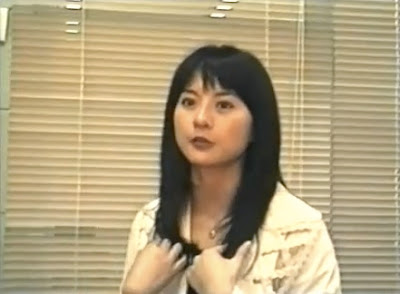 After that we follow Rick into the Hong Kong Planet Hollywood, this tour of the restaurant is mercifully brief as we see some of the props around the place, but the combination of low light and blaring music make it difficult to see or hear much at all. 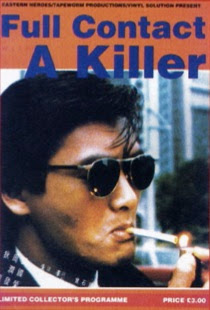 Here we move onto the Heroic Bloodshed segment, which starts with a brief chat with Simon Yam, who says he prefers making movies such as Hong Kong Gigolo over action movies, I bet you do Simon!

The best part of the whole tape is footage from Chow Yun Fat's 1993 appearance at the legendary Scala cinema in London. I was gutted to miss out on this at the time, I'd been to a previous Eastern Heroes event at the Scala the year before, but I couldn't get a ride this time. Cool looking as ever and as charming as his onscreen self, Chow works the audience to a fever pitch, lapping up the attention from the fanboy crowd. Highlights include two ladies getting the chance to meet Chow, both overcome by the occasion, the older lady who cries as Chow jokes about them getting married and leaving together is the absolute highlight of the tape. Ever the pro, Chow keeps a match hanging from the corner of his mouth almost throughout the entire Q&A session. 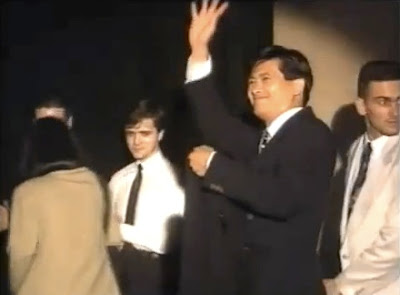 The Category III section is very disappointing, as Deadly China Dolls is rolled out again! Did we really need more clips from this one? From there we get clips from Holy Virgin vs The Evil Dead, The Untold Story and Run And Kill, along with another soundbite from Simon Yam, telling us thrillers are popular in HK.

A visit to the Eastern Heroes shop in Camden Town comes next. I'm not sure if the spelling of the word laserdisc with a z instead of the s was intentional or not, but I hope so since it appears on two different signs we see. The shop was somewhere I always wanted to visit but I never got to go, had I seen this at the time I may have made more effort, just to see all those lovely HK laserdiscs. 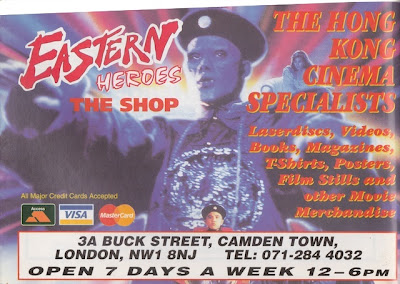 From here on in things go downhill rapidly, as we see video reviews of a number of Eastern Heroes releases (thankfully not Deadly China Dolls), including Hard Boiled 2 (actually The Last Blood), Magic Cop, New Killers In Town, The Victim, Holy Virgin vs The Evil Dead and Spooky Encounters (Encounters Of A Spooky Kind 2). These are delivered by a variety of people including facebook friend Ken Miller and martial arts star Jude Poyer. Unfortunately the reviews don't work in this video format. Nowhere near detailed enough to really be called reviews, technically poor and with awkward delivery, which only enhances the feeling you're paying to see an Eastern Heroes advert.

More promotion as Rick is back to promote another Eastern Heroes release in the form of the previously thought lost kung fu flick Snake Deadly Act. 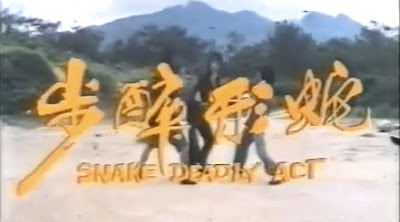 The last segment before the film that rounds out the tape is a selection of trailers and clips for D.I.Y kung fu movies, I don't mean to sound harsh here, but if I'm honest these clips did nothing more than give me a headache. I can only apologise if anyone reading this was involved in any of them, sorry!

The film featured on the tape is an early Jackie Chan appearance called Young Tiger and is dubbed into English, which I haven't seen. 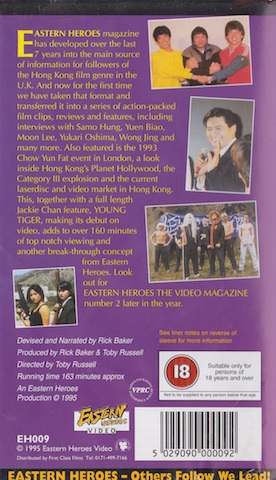 In truth I was kind of right on both points I made earlier, the video magazine was a solid idea and indeed parts of this first issue are great fun. Unfortunately the sheer amount of Eastern Heroes self promotion and it's products kind of takes away from said fun. Rick does deserve credit though, as it was a ballsy move to attempt something like this, despite a few technical issues and content choices it works pretty well. If I had seen this at the time of release I think I would have been more forgiving of it's problems, the best parts made it worth seeing the rest. In particular, at this time I'd never been to Hong Kong and the thought of being able to go and browse in a video store there was something I dreamt about (and yes, I'm aware how sad that sounds), and this would have been as close as I would get for another few years. The Chow Yun Fat appearance is worth seeing the tape for alone, and perhaps most importantly, for an hour or so I was transported back to the early to mid 90's when Hong Kong cinema was in one of it's most vibrant periods, and that my friends is priceless!

Eastern Heroes magazine is being relaunched? I did not know that. Used to scour bookstores and places like Tower Records in the 90s for the original run. They were not easy to find here in the US.

Jay, I'm not sure if they are relaunching the magazine, but they have an event planned for October and there is talk of a scrapbook of reprints of older material amongst other things. They weren't that easy to find over here either, so I can imagine how hard they were to find in the US.

Great post Mart, I remember this 'zine turning up in the Fanzine Focus column of Darkside in the 90's and it was down to this very blog that I picked up the anthologized Eastern Heroes book - it's a pretty good read actually !

Hey Wes, I was just thinking of emailing you, it's been such a long time! Thanks for the kind words and great to see you back.