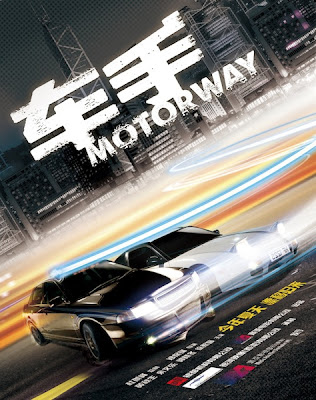 Motorway, Soi Cheang's second film for Milkyway Image (after Accident) took three years from the start of production to it's release. Dogged by delays with script alterations and editing problems, along with breaks for filming Cheung's big budget Monkey King movie, was Motorway ultimately worth the long wait? 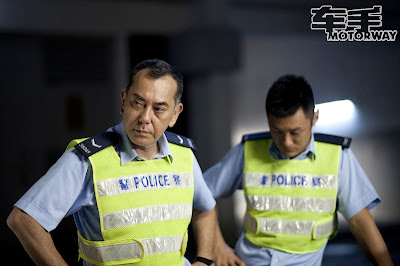 Cheung (Shawn Yue), is a traffic cop and part of the pursuit team whose job is to chase down and stop dangerous drivers, he also moonlights as a racer in Hong Kong's illegal street racing scene. He lives to drive fast and struggles with authority, thus upsetting his soon to retire partner Lo Fung (Anthony Wong), who is keen to stay out of the trouble the hotheaded rookie gets him into. When Jiang (Guo Xiaodong), a highly skilled wheelman from Lo Fung's past returns to Hong Kong to free criminal Huang (Li Haitao) from jail, the four men are on an inevitable high speed collision course. 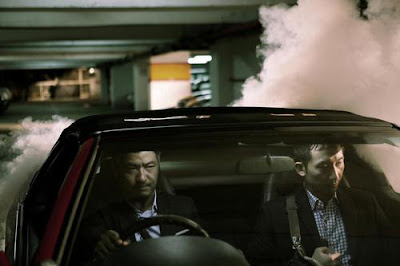 Originally billed on the teaser posters as "A karate showdown on wheels", the finished film delivers something as close to that description as anything you could imagine, with the master and pupil style relationship between Wong and Yue's characters, the learning of a particular driving "stance" and also in the duel like nature of the driving sequences, where skills and technique are more important than speed or power. Like many kung fu movies Cheang's film is extremely simple (not to mention cliched) in both it's narrative and characterisations, and it isn't hard to see why the movie has received criticism for this exact reason. However what could be considered a weakness is in my mind one of it's greatest strengths. 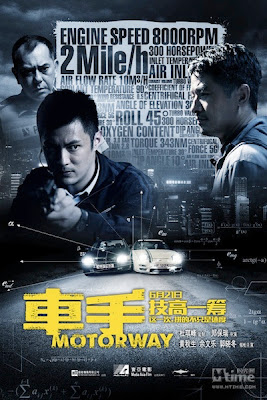 Although clearly taking influences from a number of car movies, it's difficult to discuss Motorway without mentioning Refn's Drive. Despite production beginning on Motorway long before Drive, it's clear Refn's film was a huge influence on Cheang's movie (although he claims not to have seen it), mostly obviously in it's aesthetics and the emphasis on mood, but also in being an exercise in pure genre filmmaking. While Motorway doesn't quite reach the heights of Drive in this regard, the decision to jettison back story and subplots from the film in the editing process and maintain a lean almost 90 minute running time pays dividends. Leaving little fat behind, it rewarded this viewer at least with a taut and satisfyingly simple cops and robbers tale that benefits from having the confidence to get from A to B without the need for silly plot twists every five minutes, as so many films do these days. In a nice touch, almost all the nuances of character and psychology are added when the characters are in their cars, and via their driving styles and choices, thus helping to keep the film tight as a drum, only the underdeveloped female roles feel a little extraneous. 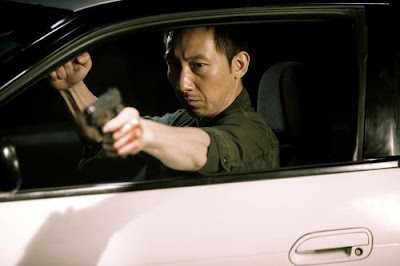 Slick and stylish, technically the film is excellent in every department, with the almost exclusively real car stunts generating genuine excitement as the photography perfectly catches the neon lights of night time Hong Kong flashing by, and the growl of the engines and screeching of burning rubber highlight the film's terrific sound design. The electronic score by Alex Gopher and Xavier Jamaux (available as a download from itunes and Amazon) is superb, as is occasionally, a highly effective use of silence. The leads are all solid with the ever dependable Wong stealing the show as usual, although Guo Xiaodong does plenty with not a whole lot to work with, at least on paper. 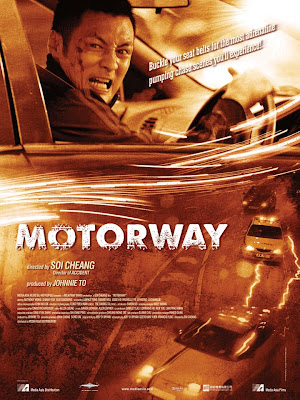 The slickness of Motorway may alienate fans of the director's earlier works, in particular it's a world away from the nihilism of Dog Bite Dog, and as much as I enjoyed both this film and Accident I really hope the edginess of Cheang's earlier work hasn't disappeared completely.

The fact that Motorway revels in it's simplicity and uses so many genre and character tropes, results in the fates of the four main characters being completely obvious from a very early stage of the film. If this is an issue for you then you will undoubtedly have problems with Soi Cheang's movie, if however you are more interested in the journey than the destination, then put on your seatbelt, hold tight and enjoy an exciting ride around the high speed streets of Hong Kong!

Viewed via the Hong Kong blu ray.
Posted by A hero never dies at 5:39 PM

Great to have you back.

Thanks Phantom, it's good to be back. Simplicity is often very much underrated.

I was going to bypass this movie until I saw your review and your references to Drive. I might be in the minority but I really liked Drive and its soundtrack as well! Motorway is going to play at a local theater late February so I'll wait to screen it then!

I thought everyone loved Drive! The two films have a lot in common, while still being completely different. Hope you enjoy it and thank you Mr C.

Glad to have you posting again! I need to take your route of actually doing so....

I've missed the posts here. Would often check the page and thought maybe it moved or something . Anyway, glad you're back. I had not even heard if this movie. Now, I must see it.

Pleased you enjoyed it too Charlie!