I've regularly questioned the adulation Arrow video have received for their blu ray releases of Italian genre movies from the likes of Fulci and Argento, many of which left much to be desired, not least their The House By The Cemetery disc. To redress the balance I wanted to highlight the quality of their latest release, Fulci's Zombie Flesh Eaters. 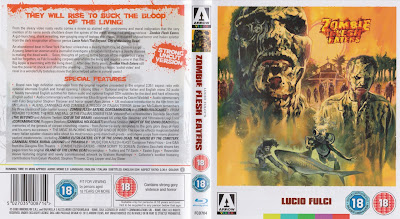 Previously released on blu ray in the US by Blue Underground, with an inconsistent transfer that suffered from overzealous DNR treatment, resulting in a lack of detail in many shots. While far from perfect I was reasonably happy with the disc and thought B.U's disc would probably be as good as it got for this old favourite. When Arrow announced their release of the title I assumed it would use the same master and follow the familiar pattern of looking worse than it's US alternative. How wrong I was, the new transfer Arrow have produced is a huge improvement over the B.U version, it's brighter, has better contrast and perhaps most importantly has much more detail. In addition the Arrow transfer has more picture information on all four sides of the frame. I understand this is the first transfer Arrow have actually had input into, and the results are very impressive. For Dvd Beaver screen captures click here. 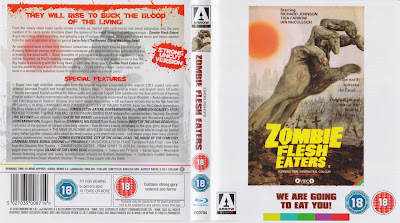 Arrow's release is available as a limited edition (500) in their usual window slipcase version, as a steelbook and the standard release pictured here, which features a reversible sleeve, a booklet and two blu ray discs. 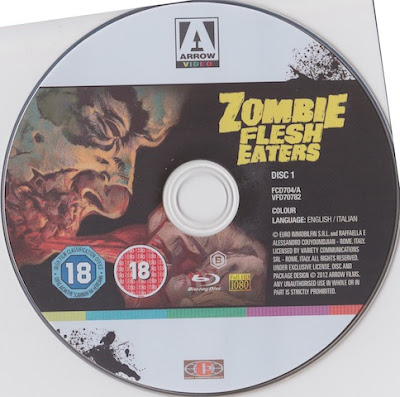 The movie disc is locked to region B, which is unusual for Arrow, presumably this is to comply with the licensing deal for the movie. 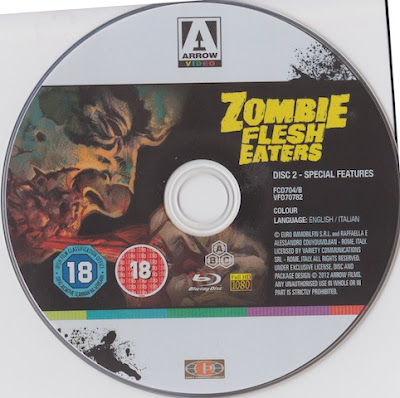 The plentiful special features come on a second blu ray which is coded for all regions. 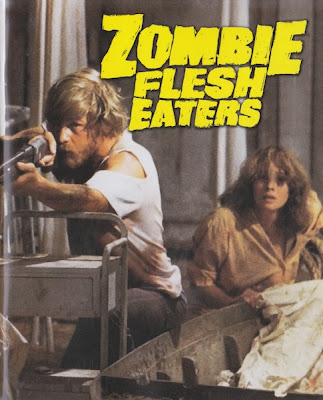 If you're a fan of Fulci's classic and have a region B playback option, I highly recommend this Arrow release, regardless of if you already have the Blue Underground version. Not only is the image a significant improvement but the overall package is far superior. It's impossible to know if the improvement in this Arrow release will be a one off, or if this quality control will be carried through future releases, either way this is likely to remain the definitive release of Zombie Flesh Eaters for the foreseeable future.

Posted by A hero never dies at 2:05 PM No comments: Links to this post