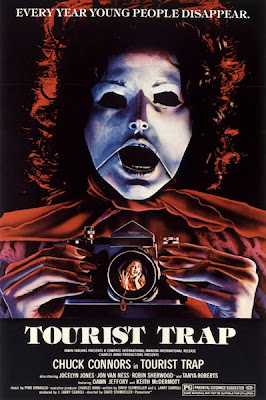 Made in 1979 and somewhat overshadowed by it's contemporaries, David Schmoeller's feature debut Tourist Trap is a definite oddity. Not only is it one of the more bizarre horror films of the seventies, it must surely also be one of the creepiest PG rated films ever made. At once impossible to take seriously, yet delivering the kind of unsettling mood and genuine scares many horror movies would kill for. 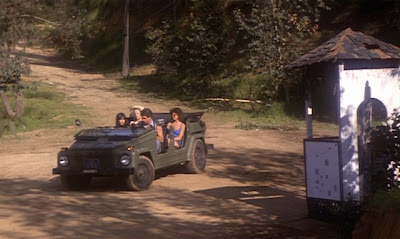 A group of friends (Including future Bond Girl Tanya Roberts) stop at an old rickety wax museum looking for their friend who is missing, where they encounter the friendly owner Mr Slausen (Chuck Connors). Despite being unnerved by the incredibly lifelike mannequins on display, the group stick around and soon begin to disappear, as the museum literally becomes the titular Tourist Trap....

Starting out as it means to go on, Tourist Trap's first set piece leaves you unsure of what you have just seen as a cacophony of laughing dummies and flying objects assault Woody (Keith McDermott), and from there events take a turn for the weird. Schmoeller's film borrows from a number of sources, including two of the very best in Psycho and The Texas Chainsaw Massacre, but blends all of it's influences into something, if not unique then distinctly individual. 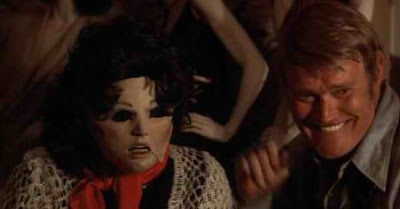 In order to achieve this distinctive mood, Schmoeller employs some excellent, creative effects work (Impressive considering the film's obvious low budget) and more surprises than most horror franchises can muster in their entirety, alongside a committed central performance from Chuck Connors. All of these components are equally important, and they all produce spikes of fear throughout the film, contributing to a feeling of just when you think things can't get freakier, it can and does. The trump card of the film is the score by Pino Donaggio, who provides some of his very best work here. From bombastic horror to breathy female vocals, to the romantic love theme (don't ask!), this is a truly superb score and it's criminally unavailable on CD, various tracks were released on a compilation CD but that is now long out of print, and vinyl remains the only format the full score is released on. 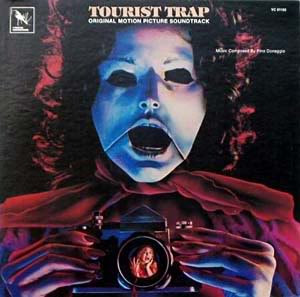 Tourist Trap holds up remarkably well for such a low budget film, and it comes recommended to even the most jaded of horror fans. While it doesn't deliver much in the way of graphic violence, it's weird vibe and genuine scares should make Tourist Trap the kind of once a year Halloween treat any horror fan can get onboard with. If you have (a perfectly rational) fear of mannequins or freaky masks, then this film cannot be recommended anymore highly to you, but don't blame me if you can't sleep for weeks afterwards! Just one question, how did this get a PG rating?

And sometime a weird vibe can be enough. For me this film belongs with the likes of Children Shouldn't Play With Dead Things - one of those films that blindsides you every so often with it's uniqueness. I must watch this again Mart, I really did like it when I first picked up the DVD years ago. Chuck Conners is a very solid actor too - I see him in a lot of trash westers but he manages to bring a level of class to even the most humble effort...

Yep, definitely wasn't expecting much from Tourist Trap but it did completely blindside me, I loved it. It's fascinating to me how and why we connect with certain films such as this.

I remember being freaked out by this as a kid, and have not gone back for a second viewing.

Tourist also tend to gaze up to try to see the tops of the skyscrapers, which New York natives almost never do. They also will take pictures on sidewalks when not in front of particular landmarks.