I just bought my first two VHS tapes in what must be approaching 15 years, inspired by a viewing of Philip Chan's Night Caller and the various bloggers and facebook friends including Jared, Jayson, Jack and king of "The inferior formats" Kenneth.

I don't even have a VCR anymore, when my last one bit the dust I never replaced it as my entire VHS collection consisted of two tapes, both kept for purely sentimental reasons. Palace's original dubbed rental release of John Woo's The Killer is one, which I rented so many times from my local video store they let me keep the tape! 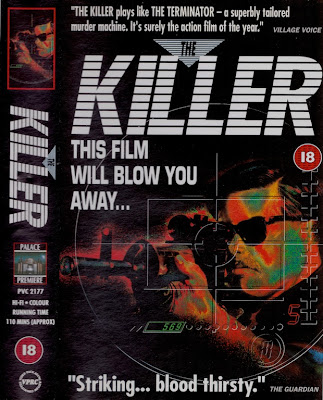 The second is the Made In Hong Kong release of Woo's Bullet In The Head. 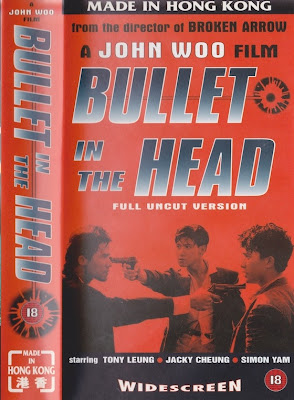 Neither of which I was ever likely to play again, however despite resisting for as long as possible seeing some of the goodies on the aforementioned blogs etc. I finally gave in and picked up two Eastern Heroes titles, one being Night Caller and the other Wang Lung Wei's Escape From Brothel. Of course buying those tapes meant having to look for a "new" VCR, more on that and the two Eastern Heroes tapes soon.

I told myself before getting into this I would only pick up tapes that are hard to find on other formats but I'm already beginning to think how cool it would be to have all of the Made In Hong Kong releases, not to mention that I've been scouring ebay for my favourite horror titles. It feels as though I'm already on a slippery slope....

Email ThisBlogThis!Share to TwitterShare to FacebookShare to Pinterest
Labels: Bullet in the head, John Woo, The Killer, VHS

Wow, that's a cool cover for The Killer!

Buddy, just be careful. I went a little crazy with my VHS collecting recently this past year and I just had to put a stop to it because it was getting out of control. lol. But it is fun!!

For instance, after years and years of patiently waiting, I finally found "Pedicab Driver" on VHS for a shocking low price. Every time I've seen it it goes for about $100 for an original VHS, but either this guy didn't know what he had was extremely rare, or just didn't care. lol. Aaaaawesome find and well worth the wait. :)

I think I've mentioned this to you before but that dubbed & fullscreen THE KILLER tape was the very first HK film I got hold of (on legit tape anyway). Back in the day those tapes came and went. I remember ringing Forbidden Planet shops (even one in Wales!) to get a copy of A BETTER TOMORROW (also a dubbed/fs tape). I ever got it and in the end I had to settle for a 3rd generation dupe off a tape from Holland. LOL. I've still got that KILLER tape (of course!). xD