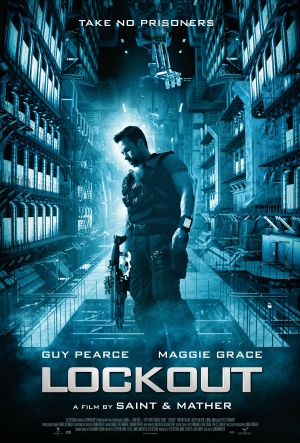 Dumb, ridiculous, lazy and derivative, all words that comfortably describe the latest movie from the prolific Luc Besson stable of potential action franchises. Despite this, Lockout has an ace up it's sleeve in the form of leading man Guy Pearce, who as secret service operative Snow delivers one of the more enjoyable action heroes for quite sometime. Equal parts Snake Plissken and John McLane, Snow is as copycat as they come, yet I still found him immensely enjoyable and the highlight of first time directing duo James Mather and Stephen St.Leger's movie. 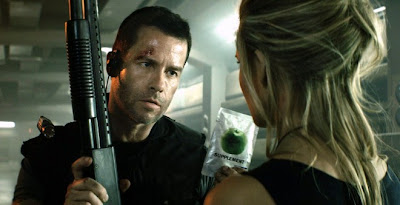 If the characters are derivative, this is nothing compared to the film's plot, which steals from the same two movies it takes it's character from, as well as a hundred or so others. If I were to describe the story as "One man mission to save the President's daughter" + "Die Hard in a space prison", I don't think it would be too taxing for genre fans to connect the dots!

Lockout has a number of serious issues that push it into the realms of bad movie territory, the screenplay is oddly structured and horrendously cliched, it has some terrible cgi (seriously, what is with that bike/car chase at the beginning?), the action is horribly edited, the supporting cast is full of cardboard characters and it fails completely to make anything of it's setting.

Having said all that I still had a pretty good time, all thanks to Guy Pearce, who breathes life into the proceedings with real vigour and gives everything to the part. Yes, he's overwritten with almost every line being a wisecrack, but Pearce sells it and is the saving grace of the whole project (Unlike Maggie!) and I wouldn't mind seeing Snow return at some point in the near future. 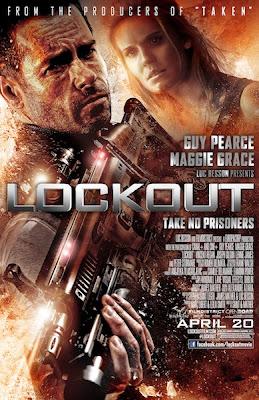 I just did a little review myself and I pretty much dismissed it. Sure, its easy on the eyes, but the flaws are just too much.. Guy Pearce is ok, but so many one-liners it destroyed their impact...if you like check out my crushing review...