Image entertainment have announced the release of Stuart Gordon's Re-Animator on blu ray. This is a huge release for me, as Gordon's film is probably my favourite comedy horror ever. It surprises me it has taken so long to come to the high definition format. It was one of the films that sold me on the fledgling DVD format with a cracking release, even back then when the format was struggling. I expected we would have seen it in 1080p earlier, but never mind as it will arrive on September 4th. 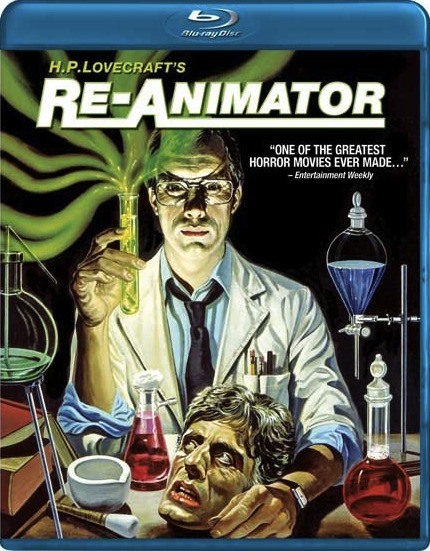 The blu ray is scheduled to include most of the extras from the most recent Anchor Bay dvd and a brand new transfer. The thing I'm looking forward to most about this release is hearing the Richard Band score in the lossless DTS format. I just hope they don't ruin the transfer! RRP is a very reasonable $17.98.
Posted by A hero never dies at 7:34 PM

Heeeeeeell yea!
I'm super stoked about this one too buddy.

Could've sworn this was already out on bluray, but i'm glad it's coming out now at least. Stuart Gordon is fairly under-rated, and I even enjoyed films like Stuck which I was lucky enough to see as a double feature with Re-Animator.

I'd love to see it theatrically.