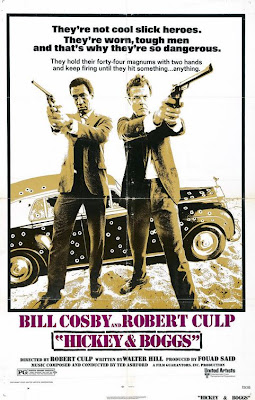 Robert Culp's only directorial credit Hickey and Boggs, made in 1972 was one of the first screenwriting credits of Walter Hill. Hill would go onto become a major director in his own right, being responsible for some of the most manly movies made in Hollywood. Culp, paired with his former I Spy co-star Bill Cosby as the two private investigators of the title, play against type to deliver a bleak tale of murder and avarice in the sunshine of L.A. 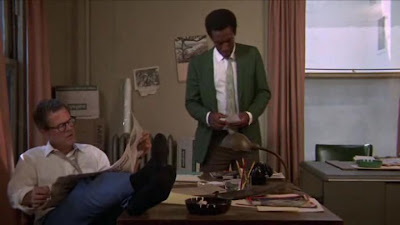 Detectives Hickey (Bill Cosby) and Boggs (Robert Culp) are hired to find a missing woman, for reasons unknown to them. and it isn't long before they find themselves up to their necks in trouble, thanks to the trail of corpses left in their wake. On one side they have the cops (including a young James Woods) wanting to know why the bodies seem to be following them, and on the other side, a gang of armed enforcers (including the great Bill Hickman), who are there where ever they go, and worse still they won't stop shooting at them. It all has to do with a case containing $400K of stolen cash from a bank job some years before. 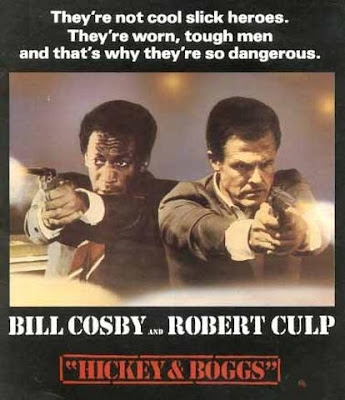 Hill's intricate screenplay offers only hints at what his future work would offer but the seeds are certainly there at least in terms of the fatalistic tone established by the film. Cosby is surprisingly good, adding real depth to his character without really having to do very much, a solid piece of work. Culp's character has more quirk to it but as Cosby is so good, this works in the movies favour to keep the audience slightly off balance. More importantly, despite playing different types of characters to their previous work together, the chemistry between the two is priceless. Battered and bruised by their lives, and with little to show for them, they carry on regardless. The two jaded men don't even seem to be good friends, yet they need and rely on each other to keep going, without the constant goading between them, they surely would have just laid down. The job they do and the people they deal with only further enhance the deep sense of malaise. 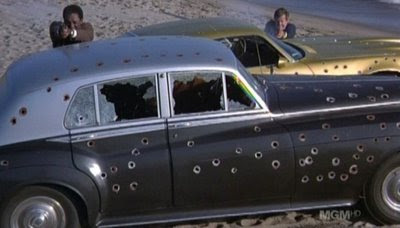 Culp's film is at once dryly amusing and downbeat, and also has a surprisingly subversive streak, giving an uneasy feel that permeates the entire movie. While the film has a few problems, particularly in the editing department that threaten to undo some good work in the otherwise well done action sequences, overall Hickey and Boggs is well worth your time. The story is nicely constructed and treats it's audience with respect, and the unusual character moments throughout the movie are a touch of genius and say more about the men than any amount of exposition could have. An unjustly neglected rough diamond of a film, Hickey and Boggs has been difficult to see for many years, with only a terrible dvd release in the US until MGM released it as part of their burn on demand dvdr program, honestly it deserves better.
Posted by A hero never dies at 7:46 PM

Happy to see this is worth-watching! Always wanted to see it.

Whaaaa????
I have NEVER heard of this and my mind is kinda blown right now. Bill Cosby?! Walter Hill?! Robert Culp directing?! This is crazy! I must see this!

Great review man, you sold me on this one.