Before the real reason for this post, a little history. I first became aware of the writing of Tim Lucas via his column published in Gorezone magazine, by far the highlight of that particular publication. When I became aware the column was to be fleshed out into a full magazine I couldn't wait to get my hands on a copy. I distinctly remember buying the first issue from my local comic book store, it was the day prior to my final family holiday. A holiday I was too old for and found particularly tiresome, indeed the thing that got me through that week was my spanking new copy of the first ever issue of Video Watchdog. I didn't want to be at the beach with my parents, I wanted to be out searching for rare cuts of the Jess Franco movies I was reading about in my new found bible. Of course it's not that easy to find even common cuts of Jess Franco movies in the English seaside town of Skegness! I thought I did particularly well to find a cut VHS of Lucio Fulci's The Naples Connection, under the title of The Smuggler considering my location.

I read that first issue cover to cover at least three times that week, and it instilled in me something that is still true to this day about the magazine, even if you think a particular issue may not be of interest to you, you're invariably wrong once you start to read it. The amount of movies VW turned me on to in it's early days, those dark pre internet days especially, is incredible, but even with the internet overload of today, I'm still reading about exciting movies to track down thanks to the magazine. Even on the rare occasion I haven't liked a movie championed by one of the many contributors, rarely if ever, have they not been at least interesting enough to be worth viewing. Since starting this blog, I've been lucky enough to have contact with a few of the magazine's writers including John Charles and Mark F. Berry, leaving me quite starstruck! 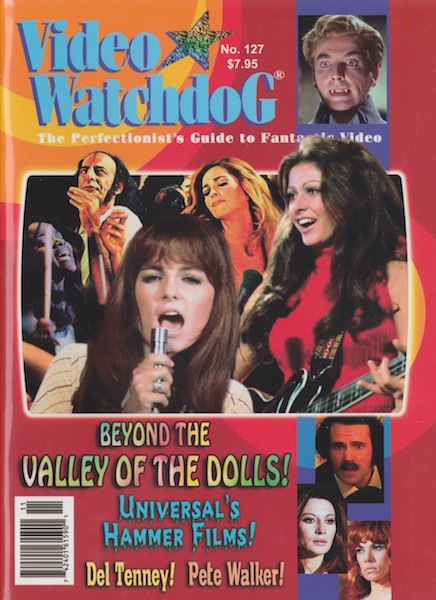 Back to the original reason for the post, I have purchased and devoured every single issue of Video Watchdog since that very first one, except for issue 127 from Oct/Nov 2006. Over the years I've obtained my copies in a variety of ways, from shops, mail order, subscriptions etc. The time I really needed to be subscribed however I wasn't. I can't even really remember now why I couldn't get issue 127, I think it was a problem with the printer and that barely enough copies were produced, whatever, all I knew was I was missing an issue and I couldn't even get it from the publisher! So I've waited almost 6 years to actually get hold of a copy and eventually when one turned up on ebay, it was mine. Today it arrived and somehow the thrill of finally getting my hands on it was similar to picking up that very first issue all those years ago!

Just as an aside, I'd love for the magazine to have a digital variant as well as the printed copy, as much as I love to hold the physical issue, with the financial pressures many are under, I can't help thinking a cheaper, digital version would help to increase sales, as well as the fact if ever a magazine was suited to variants, it's this one.
Posted by A hero never dies at 7:25 PM

Great post Mart. VW is the only film mag I buy these days, as soon as a new issue hits the website I pick it up. I managed to grab every issue (including the two specials) with relative ease, I picked up #127 on eBay with little fanfare. If there was one issue that I couldn't nail down (even more so than the first 10 issues was issue #26 - which I hunted high and low for. Long sold out at the VW store and no collectors prepared to give it up I eventually found a copy in a Swedish record store (?) I always found VW had an enormous fetish power, something to do with the size of the mag and the featured cover within the TV window frame motif - I have many favourite cover designs but I think my all time favourite is #13 (Manhunter) and I love #21 (Star Wars) as well

Cheers Wes, I used to buy so many film mags it's frightening how much money I must have spent, I don't even want to go there. Like you VW is the one and only these days. Strange how you got the rarer issue so easily and struggled with #26. As for my favourite covers, I like #16 Fire Walk With Me #38 Dawn Of The Dead, #134 Edgar Wallace but my favourite has to be #92 Ring, utilising the frame to have Sadako climbing out of the magazine itself.

Yeah, those were great covers. The writing is consistantly strong and authoritive in VW - if I'm not mistaken Paul Sammon's definitive Blade Runner study, Future Noir emerged out of a piece he wrote for #20, (The Seven Versions of BLADE RUNNER!) and among my favourite articles in the magazine was the Tarzan piece in #114 ("TARZAN - From the Silents to Bo Derek") and the Looney Tunes box sets in issues #123 and #124 - the kind of Cinema I'm not normally drawn to, but the writing was so good it was hard not get swept up in the enthusiam. (I later got the Looney Tunes sets, and highly recommended they are too)... If there's one weak link in recent VWs it's Ramsey Campbell's film review column, which is about 70% plot synopis (something I know both of us really hate), and 30% analysis (the same thing spoiled the otherwise excellent UK pro-zine Is It Uncut? as well) It's funny, cos I used to like Ramsey's columns in Shock Xpress, but in VW, he's just being lazy. You mentioned him earlier, but I really like John Charles' writing and Rebecca & Sam Umland are great too.

Nothing like the thrill of a first issue, or a rare issue finally found.

I've never subscribed to VW, but I've always found each one somehow.

I like short synopses that just give you a sense of the story. Detailed synopses are death to me also. I'm not sure why Mr. Campbell is reviewing in this way because he hasn't always taken that route.

It's still a great mag. Like you, I've gone through periods where I was buying up to a dozen mags a month.

I really miss the old Cinefantastique (pre-STAR WARS). VW is the closest thing we have to it while being its own beast.

Wes, Love those Looney Tunes sets! I never could get into Tarzan though. Love the Umland's work too.

Phantom, Things certainly have changed, aside from generally lacking the inclination to spend crazy amounts of money on mags anymore, I would no longer have the time to read them. These days unless a magazine has a distinct personality to it, as VW does, then it's just a waste of paper.