A Gun For George

A Gun For George is a short film (17 minutes) from 2011, it was shown on UK channel Film Four in the early hours during May this year as part of a season of revenge films. I recorded it, knowing absolutely nothing about it other than the description on the Sky info "Short, violent crime thriller about a pulp fiction writer who decides to avenge his brother's death at the hands of gangsters"

I completely forgot about it until a routine clearing of the sky plus box. On starting the film I was immediately grabbed by the director credit, Matthew Holness. Holness was the brains behind the excellent eighties horror spoof Garth Marenghi's Dark Place. My expectations for A Gun For George shifted towards comedy, and while it's true that it is extremely funny, there is more to it than just that. 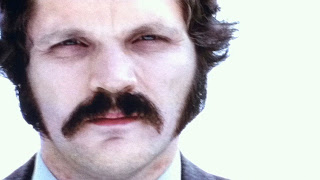 Terry Finch (Matthew Holness), is the author of "The Reprisalizer" series of books, who, having lost his brother George to the gangster scum invading suburban Kent, turns vigilante in his attempts to avenge his brother's death. Dealing out testicular violence (he has a "disquieting ball fixation" according to his publisher) to those who deserve it with extreme prejudice. In between he has to deal with his publisher and the local library to get his prose to the The Reprisalizer's rabid fan base. 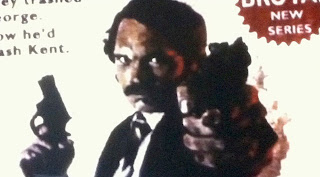 Like Dark Place, A Gun For George is built around the little details. For a 17 minute film, Finch's world is remarkably rich and rewarding, both in the real world and in his Walter Mitty style fantasy sequences, in which he doles out justice with his twin snub nosed revolvers. Functioning as both a homage to and a spoof of the kind of lurid pulp novels, that, as a child I could only stare at in wonder, desperate to know what further treasures were behind the first book on the spinning rack. Where if I'd been caught by my Mother, I'd probably have got a slap just for looking at them, in the days where prices were measured in pence rather than pounds. The Reprisalizer books with titles like "I, The Fury", "I Right Wrong" and "The Hell I Will" and with taglines such as "They trashed George, now he'd trash Kent" and "Westgate On Sea was on fire, so was he" give the feel of being genuine novels, and if only they were, I'd be first in the queue for the full set!

The film is endlessly quotable, as Finch speaks to anyone and everyone as The Reprisalizer, sounding like something out of the kind of 70's hard boiled cop shows as he warns a librarian who has upset him "I'll come for you woman and when I do, I'll re-arrange this library by genre". 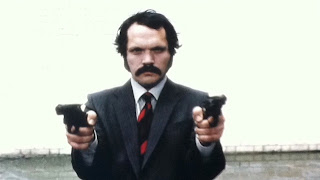 As funny as the film is, it also functions as a character study of a terribly sad fantasist, and is actually surprisingly touching and quite frightening by the end of the film. Rumours are that a feature length film featuring the characters is being prepped, it's unclear as to how that would pan out, would it be a Reprisalizer film or an expanded version of this short? Who knows, but A Gun For George makes for one hell of a trailer.

Unfortunately the film appears to out of circulation at the moment, it was tweeted earlier in the year that it would be online soon but that doesn't appear to have happened as yet. It has been shown at various festivals and has been on Film Four at least twice. If you get a chance to see it, don't miss it.

For more Holness has created a website based for The Reprisalizer, it hasn't been updated for a while but what is there is excellent stuff, check it out here.

UPDATE : The film is now online here
Posted by A hero never dies at 6:28 PM

Email ThisBlogThis!Share to TwitterShare to FacebookShare to Pinterest
Labels: A Gun For George, Matthew Holness, The Reprisalizer

Saw this film the other night, and loved the affectionate attention to detail of the 70s-style 16mm look, and sound. For people of a certain age, like me, there's a deep nostalgia for the 70s, even for the bleakness recreated so well by this film. It's great to know there's original stuff out there, but even better to know that it's possible to create new material 'from the 70s'. I envy Holness and his team, who in making such a film, almost have access to a time machine, back to the 70s!