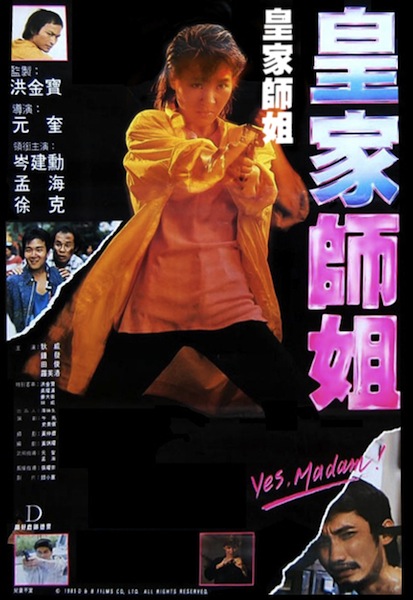 Outside of Bruce Lee and a few Jackie Chan movies, Corey Yuen's Yes, Madam! was one of a glut of Hong Kong movies I saw in a short space of time that made me fall in love with HK cinema, titles including Righting Wrongs (Above The Law) and Royal Warriors (Police Assassins). Yes Madam, released on VHS in the UK under the title of Police Assassins 2 in a horribly dubbed version, and then confusingly retitled Police Assassins for it's Hong Kong Legends dvd release, Michelle Yeoh's action film debut was unlike anything I'd seen in a Hollywood action movie. These three films combined were as instrumental as anything in helping to shape my future film viewing. 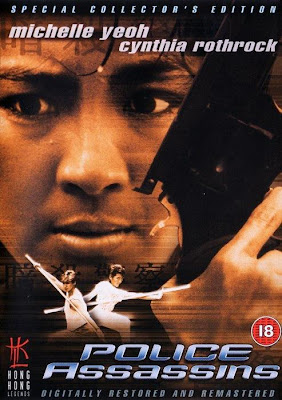 Asprin (Mang Hoi) and Strepsil (Sham Kin Fun), two petty thieves who inadvertently become involved in a murder case when they steal items belonging to a murdered man. The man had hidden an important microfilm in his passport, which the thieves pass onto a forger friend Panadol (Tsui Hark). Inspector Ng (Michelle Yeoh) is assigned to the case, along with Inspector Morris (Cynthia Rothrock) from Scotland Yard! The investigation leads the cops to the bumbling crooks and soon they are on Triad leader Tin's (James Tien Chun) tail, he will stop at nothing to get the incriminating film back and with his hitman and bodyguard (Dick Wei) at his side, he proves too much for the inspectors to catch using legal means, in frustration they give up their badges and go after Tin alone. 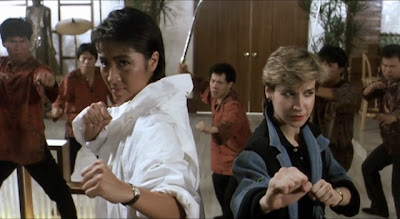 It quickly becomes clear watching Yes, Madam! that the plot is largely irrelevant, not only are there huge holes and threads that go nowhere but little of the character interaction makes any sense either. The best idea is to ignore it and bask in the glorious action, opening with a punchy, exciting robbery sequence, that immediately announces Michelle Yeoh as a bonafide action star. The film then meanders through some silly comedy and less than convincing dramatic scenes featuring Asprin, Strepsil and Panadol, with regular punctuation from the superb action sequences. The comedy is mildly amusing with Tsui Hark coming off surprisingly well but these scenes do occasionally outstay their welcome but the action is never far away. The finale at Tin's extravagant home is spectacular, with Yeoh and Rothrock (also in her first Hong Kong action movie) taking on an army of his men. The fight between the two ladies and Dick Wei being truly great. 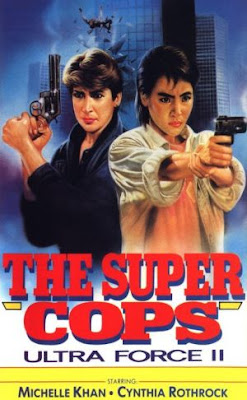 The main problem I have with the film is not the aforementioned plot issues, it's more the fact Yeoh and Rothrock feel like supporting players, when they clearly should be the centre of the film. So while the film was hugely instrumental in the proliferation of Female starring action films in Hong Kong cinema, it feels very much like the producers weren't 100% sure of the concept.

Yes, Madam! is very much a landmark film all the same, and one that although dated, remains remarkably fresh in it's impressive choreography. The final word has to be about Michelle Yeoh who, despite the deficiencies of the plot, lights up the screen every time she appears, and looks nothing less than the natural born action star she went on to become.
Posted by A hero never dies at 6:44 PM

Films from the Far Reaches said...

Nice review! I blogged about this one myself a while back. It was my first 80s style H.K. action that didn't star Jackie or Sammo. The print I first saw was the English dubbed "Police Assassins 2" which inexplicably opens with an action scene from Where's Officer Tuba! The comedy scenes were largely elimminated (Sammo doesn't even appear in this version) so Yeoh (Khan) and Rothrock are more to the forefront (Rothrock is dubbed with a thick British accent as she's from Scottland Yard in this version). It's been a favotite from the first time I saw it (way back in 1988).

It was re-titled ULTRA FORCE here!! (Royal Warriors being ULTRA FORCE 2) and we got the same horribly dubbed international versions as well ("In the Line of Duty" 1 & 2 on the prints). I never could understand why they added that scene from WHERE'S OFFICER TUBA.

Films, This film must be one of the most retitled movies I can think of, all very confusing. I don't think I remember the scene from Where's Officer Tuba but do recall how much I loved the film at that time and showed it to anyone who would look.

Jack, I've corrected the title, of course you're quite right, I'm not sure how I let that slip through the net!

In reg. to the international, English dubbed version of YES, MADAM! (i.e. "In the line of Duty"); the film opens with police cars driving up in front of an inner city house and policemen entering the building. It's been a long while since I last saw this version and don't remember how long it runs for. A couple of minutes I think. It's there instead of the scene of Michelle Khan in the store where she slaps a book on some poor guy's member. I should point out I have never seen OFFICER TUBA and have just read online reports saying that that's the film the scene is from.

You should totally watch 'Where's Officer Tuba?', it's a super fun favourite...

Excellent timing Dan, I ordered Tuba at the weekend, looking forward to it.