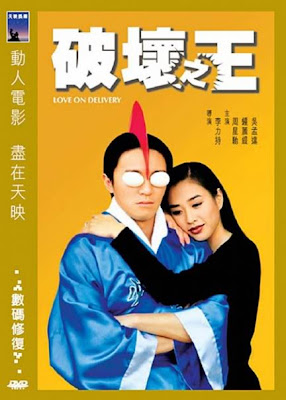 Based on a manga, Lee Lik Chi's Stephen Chow vehicle Love On Delivery showcases why Chow was so popular at the Hong Kong box office during the 90's. The movie's mix of low brow and slapstick comedy alongside dashes of something more intelligent, all delivered with impeccable comic timing make Love On Delivery one of the most accessible and enjoyable movies of his pre King Of Comedy output. 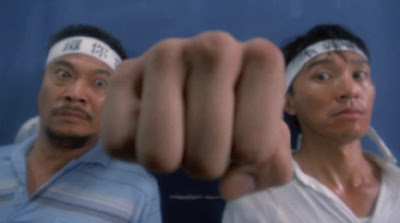 Meek delivery boy Ho (Stephen Chow) falls for a gorgeous judo student Lily (Christy Chung), who is being harassed by her instructor Blackbear (Joe Cheng). When her teacher goes too far Ho steps in to protect her, the problem is Ho is cowardly by nature and his efforts to save Lily result in her being punched in the face. Ashamed and desperate to impress Lily, Ho decides to learn kung fu from a shady hustler called Devil Killer (Ng Man Tat) who claims to be a kung fu master. Ho is completely taken in, reinventing himself as a masked hero and believing he is invincible, even more so when he gets an opportunity to save Lily from Blackbear once again and beats him. The mask proves to be a mistake however, as many other would be suitors of Lily claim to be her knight in shining armour, the most dangerous to Ho's hopes is karate master Tuen Shui Law (Ben Lam) who Lily believes really saved her. In order to win Lily's heart, Ho must face insurmountable odds and challenge the karate master in the ring, cue training montage..... 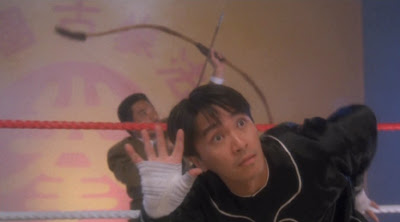 Chow plays against his usual smart ass, obnoxious persona in Love On Delivery and provides what is probably the most aimable character of his career so far. The underdog is a staple of sports films but the cowardly nature of Ho gives it a little more edge than usual. Indeed at times the cowardliness almost goes a little too far, as Ho is downtrodden so often it makes you want to scream at him but Chow is so good you never lose any sympathy for him. This aspect of Chow's performances is what makes him so much more than just a comedy actor, in his best work he manages to make scenes that shouldn't be (and wouldn't be in other films), oddly touching, in and around the comic insanity. Ng Man Tat, so often paired with Chow, gives one of his funniest performances and Ben Lam and Joe Cheng provide great support as the villains of the piece. Jacky Cheung pops up in an amusing walk on cameo too. 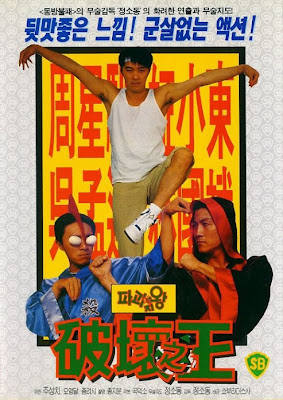 With the constant barrage of gags thrown at the screen, inevitably not all of them hit the mark and plenty of them are aimed extremely low (wiping shit on someone's face anyone?) and as with all Chow comedies some of the humour will be lost on non Cantonese speakers but few comedies I've ever seen make me laugh as much as Love On Delivery. Along with the cheap laughs the film has a great understanding of the conventions of the sports movie and has great fun riffing with the tropes of the genre, see the training montage to see what I mean. This raises the humour to a higher level and makes a very silly film just that little bit more intelligent than you would ever expect, particularly after seeing the opening ten minutes. 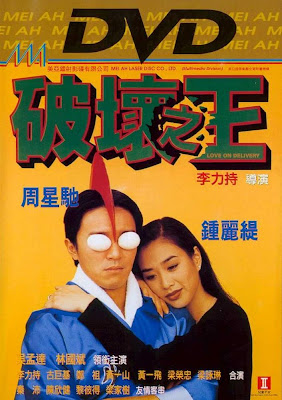 If you're new to Stephen Chow having seen Shaolin Soccer and Kung Fu Hustle and are thinking where do I start with his old movies? I can't think of a better place than Love On Delivery. The laughs come fast and frequent and the film becomes more and more hilarious as it goes on, right through to the final action scene (by the great Ching Siu Tung). I've seen the film many times and each time I see it my affection for it grows, it's a shining example of not only the importance of great comic timing but also just how funny seeing a man fighting in a Garfield mask can be.

Excellent review! This is easily one of my favorite Stephen Chow films.

Thanks Richard, definitely one of his or anyone else's funniest!