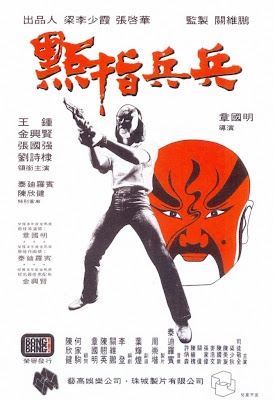 Having honed his skills making TV dramas, Hong Kong new wave director Alex Cheung hit the ground running both artistically and commercially with his 1979 debut feature Cops and Robbers. Delivering exactly what the title promises in a taut, exciting and brutal 90 minutes.

Dedicated cop and single father Sergeant Chan (Wong Chung) leads his team of cops in a shoot first, ask questions later style that earns him the nickname "Dirty Harry" (The subtitles call him both Dirty Happy and Harry but I'm sure it should be Harry). Chan's boss assigns rookie cop Wing (Cheung Kwok Keung) to the team as they investigate a gang of ruthless bank robbers led by Biu (Hui Bing Sam). 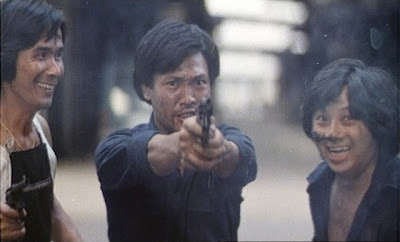 A simple plot filled with what were already cliches back in 1979 doesn't stop Cops and Robbers punching well above it's weight, and bringing a zesty freshness to the genre. Thanks in main to the superb direction from the debutant filmmaker, who makes the most of the tools at his disposal to craft a film that works as an action thriller but also has much to say about both the police and the sometimes fine line between them and their quarry. In many ways the film looks very dated but in it's exploration of attitudes towards the police the film is still very relevant today. 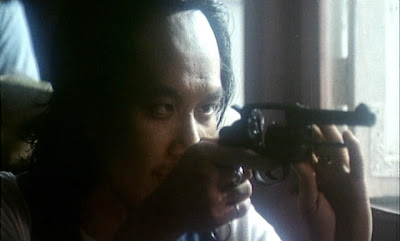 The performances are fine but this isn't really an actors film, the drama is more about actions than words and this is highlighted by the power of the film's violence. While not overly graphic compared to many more recent movies, for it's vintage it's pretty tough stuff and Cheung makes sure you feel every last bit of it. The excellent location work also adds to the feeling of realism, bringing an authenticity to the drama and intensity to the action. 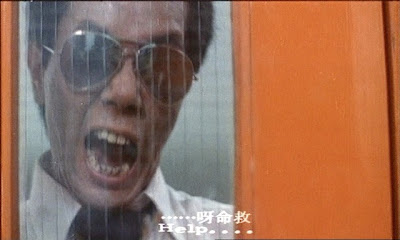 As previously mentioned certain aspects of the film are very dated, aside from the obvious things such as the fashions on display, the film opens with a song by Teddy Robin (who appears in the film and also produced) over a heavy handed scene of children playing guess what? Yep, Cops and Robbers. It's hard to imagine this being left in the film now. Any problems are easily overlooked as the core of the film is so solid, if only current Hong Kong films featured the strengths on display here. Highly influential on the crime movies that would follow, I suspect Ringo Lam in particular was a huge fan of this film as much of his best work echoes Cops and Robbers in both style and content.
Posted by A hero never dies at 7:17 PM

This looks like a great film and right up my alley. I wonder if it's readily available in the U.S.? I'll have to look into that. Thanks for the recommendation!

Hhhmm, just checked and I can't seem to find it anywhere. Bummer.

This has now been released in France on Blu-ray, unfortunately only with French sub-titles. Hopefully someone will pick this up and add English sub-titles. I would love to see it and Man on the Brink.

Excellent work this, as in the review above "punching well above it's weight".