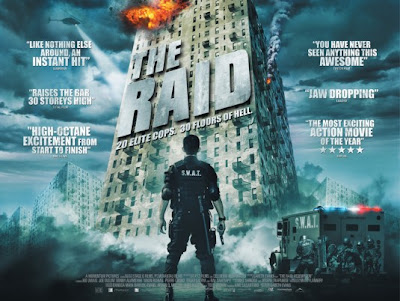 Director Gareth Evans follows up his solid breakout film Merantau with probably the most anticipated action movie for many, many years The Raid. A simple high concept pitch along with a stunning trailer was enough to leave action fans salivating at the prospect of what Evans and his returning star Iko Uwais would deliver. The intensity of the buzz created at early screenings of the film was like nothing I'd experienced since John Woo mania almost twenty years ago, and the reputation of The Raid just kept growing and growing as more people saw it. The UK has had to wait quite a while for the movie to be released, and now it's here, any worries I had that it may not live up to the hype have been well and truly shot, stabbed, kicked, elbowed etc. etc. into oblivion, The Raid is simply stunning. 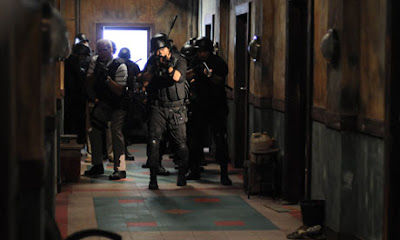 A tactical unit led by Jaka (Joe Taslim) and featuring Rama (Iko Uwais) sets out to infiltrate a notorious gangster's hideout and arrest it's leader, the vicious Tama (Ray Sahetapy). Operating as a safe house for the criminal fraternity, the building is filled floor on floor with gangster scum loyal to Tama. When a young boy spots the unit and raises the alarm all hell breaks loose, and the game changes to survival. Now they're inside fighting for their lives, will any of them make it out again? 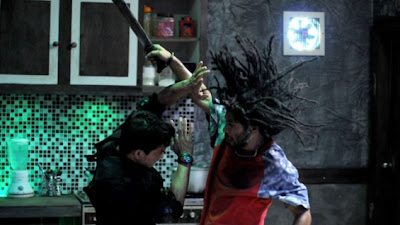 Evans wastes little time with the setup, a few establishing shots of Rama before the raid and a pep talk from Jaka inside the van and we're away with the onslaught of almost relentless violence. Perhaps The Raid's most impressive element is it's pacing, with it's adrenaline fuelled action sequences punctuated with perfectly placed breathing spots before going again and again and .... well you get the picture, so much so that the set pieces don't really feel like set pieces. For those who haven't seen Merantau, the Indonesian martial art Silat will be a real eye opener, the fight choreography stuns with it's fluidity and invention, not just in the hand to hand combat but with the weapons too.

The high concept is fleshed out slightly more than the plot synopsis above suggests but certainly nothing that obstructs the barrage of brutality on display, and like it or not that is what The Raid is all about. If you're reading this then I would suggest you will love it! 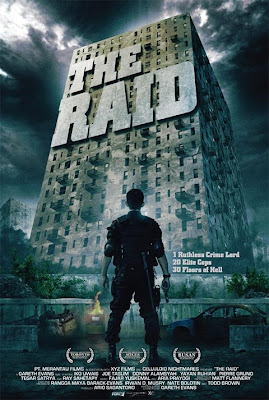 For what it is, The Raid is practically perfect, comfortably the most exciting, wince inducing action film for many years. If you were to nitpick, it's conceptually a little derivative of other action movies but does at least have great taste in where it borrows ideas from. It's so well executed it seems churlish to criticise it when the action genre is so devoid of originality in general. Evans and his talented team must be congratulated for creating as ferocious and kinetic an action movie as I've ever seen.

Gareth Evans must surely have been courted by the major studios after the calling card that was Merantau, now with The Raid they must be battering his door down, clamouring to tempt him to Hollywood, no doubt to try to turn him into the new Michael Bay! The Raid is so good, it should give him all the clout he needs to go (if he wants to) on his own terms and do what he wants to do, and that is something I can't wait to see.

absolutely terrific film! I've seen it 3 times on the big screen now, which sets a new record for me. Iko Uwais cements his place amongst the most talented new stars of the genre, and Yayan Ruhian has proven to be quite possibly the best onscreen martial arts villain currently in films period!

Great write-up! Loved The Raid! This is the action movie to beat in 2012.

Excellent review of a terrific movie. I caught "The Raid" twice here in Motown during its run--Gareth Evans is an Auteur with a capital A.

I caught a pre-screening of The Raid in Ottawa in April. Perfect way to see it with an audience of people who had little to no idea what they were getting into.

I liked the Raid, but I think the hype hurt it a bit for me. The action's strong and there's lot of memorable scenes but I'd say it's more on par with something like Ong Bak than Hardboiled. And I think I liked Ong Bak a pinch more as it had a sense of humor while The Raid doesn't. Also, can anyone explain the characters motivations at the end for me?

Don't get me wrong, I liked it and would watch it again in a heartbeat, but it's not Hardboiled!

Ty, I'll be amazed not to mention deliriously happy if we get anything else as good this year.

ewaffle, Thanks for your kind words, Evans must be the go to action movie director anywhere after this film. It's exciting just thinking of what he could go onto do.

A, great to hear from you again, you still keeping busy?

I know what you mean regarding Ong Bak, I prefer The Raid though, it's so much leaner and tighter. I went into The Raid expecting pure action and spectacle and that is exactly what I got, with very little to get in the way. I wouldn't dream of comparing it to something like Hard Boiled, despite bringing John Woo up in the review, the two films are poles apart as far as I'm concerned with completely different intentions.

I'm going to give Ong Bak another viewing soon as it's a while since I saw it to see if I still feel the same.