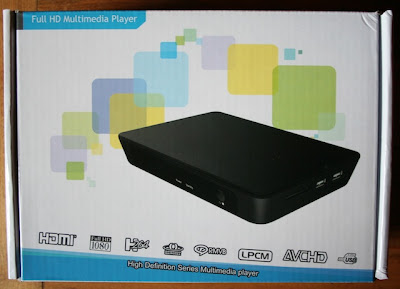 Following on from the HP Proliant Microserver PC build I recently completed, I found my WDTV Live media player was unable to bitstream the lossless audio from the blu ray rips I'd done such as the one for Gallants. The WDTV had served me really well, it played most things perfectly, and all I had to do was to put a file on a usb stick or hard drive and rather than having to watch the film or show on my laptop (which I hate) I could watch it on my TV, a much more elegant solution for my viewing habits.

The limitations of the WDTV weren't just restricted to the audio however, I found an increasing number of MKV files that wouldn't play due to them having compressed headers, which many players of this type cannot read. So I set out to find a player that could fulfil both of these requirements for as little cost as possible. What I found was the Bluetimes Coopa TV001, a deceptively simple player that promised to play just about any kind of file type you could throw at it. It may lack the network functions of the WDTV Live but every other aspect of the player seems to be far in advance of that unit. For example, spotlighting the subtitle options, you can do just about anything with them, you can change the size, colour, position in the image and even add delay to them if they go out of sync, everything to suit the needs of the file you're watching. The same goes for the image resolution, the ability is there to change the output to suit any kind of file I could find to test it with.

All of this functionality came in at the unbelievable price of £39.95 including next day delivery, as a result of the insanely cheap price corners have been cut, with the build quality and remote control both being distinctly below average. The firmware is also quite buggy but updates are promised to rectify this and for the price I can put up with a few bugs. Your mileage may vary here though, as I'm generally quite forgiving on things like this, where others may not be.

What all this means is that rather than the effort and hours and hours of hard work it took me to complete the custom dvd of The Mission, it now takes a fraction of the time to do the same thing. Just rip the video and ensure the filenames of the video and subtitles match and are in the same folder and that's it, simple.

The player is available from this website if you're interested and I'd just like to add I am in no way affiliated with either the manufacturers of the player or the company distributing it here in the UK.

This is a company whose products you do NOT want to deal with. This Blue Times or Bluetimes or whatever they are calling themselves these days are a crank outfit from China. They sell and advertise on Alibaba and Aliexpress, sites which have their own problems with ethics. Blue Times knowingly lies about their products and do not﻿ support them nor support returns. I made the mistake (and am telling you so you don't have to suffer) and bought through the scummy Aliexpress the Bluetimes c500b media player. The player worked (and worked well, could handle any mkv file thrown at it and had working connections for SATA drives, USB 2.0) but Wifi was disabled, which was a key feature of the unit. I contacted them by email and Bluetimes admitted their firmware crippled Wifi on the Realtek 1185/6 chipset and they do not upgrade firmware nor accept returns. This was completely the opposite of how the unit is marketed and advertised. Their tech support suggested a third party firmware from a Russian site that promptly bricked the unit, then they would not accept a return. You have been warned, so if you buy their stuff, you take your chances. I advis going with Western Digital, or if you want to try something a little more robust with mkv files, the KDLinks units.