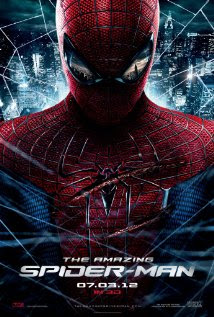 A four minute preview of The Amazing Spider-Man has been released ahead of the July release of Marc Webb's movie. It's a little alarming just how much they are showing of the film in the multitude of trailers so far, does the studio have so little faith in the property, even after the success of the Sam Raimi movies? Admittedly damage was done to the franchise after the lacklustre 3rd film but Spidey is such a huge character, giving practically the whole film away isn't the answer.


As for my own thoughts, as a Spidey fan I think it looks very good but with reservations, in particular I didn't like the choice of the Lizard as the villain, I also hate the design of him, he looks terrible. On the other hand Andrew Garfield and Emma Stone look like they will be great. One last thing, why is Spider-Man taking his mask off so frequently? Between all the trailers it looks like it happens way too often.

I think this one is gonna be the big surprise of the summer. A lot of negativity going around for it, but I have seen nothing that has lowered my expectations. Most exciting thing about it is that Spidey seems to be acting like Spidey should.