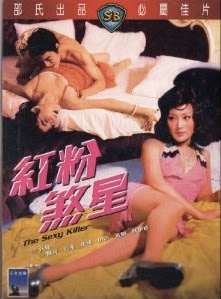 The Sexy Killer, the Shaw Brothers remake of Jack Hill's blaxploitation classic Coffy, features a lady who is not only sexy but also happens to be a killer, how smart is that? It maybe generic but you have to admire whoever came up with the title for Sun Chung's 1976 movie, as the movie completely delivers on it's title's promise. Also known under equally generic but infinitely less enticing The Drug Connection, it's no surprise it's best known under it's The Sexy Killer moniker.

Gao WenFai (Chen Ping) goes on the rampage, looking to takedown the drug pushers who first turned her little sister into a drug addict and then violated her. With her vengeance still unsated, she decides to take on the whole organisation, utilising her most deadly weapon, her womanly charms!

Sun Chung's movie follows the template of Coffy so closely it's almost identical, if anything the exploitation elements are ramped up and as a result it's arguably more fun than Jack Hill's film. What it doesn't have though is Pam Grier, and she is the real difference between the two films. Chen Ping really throws herself into the role, relishing the chance to play the avenging angel and she does it extremely well, however she lacks the total intensity Grier brought to Coffy, the belief that she means every gesture, word and act of violence with every fibre of her being. As a result, you're never quite as involved in Chen Ping's quest as you are Coffy's, this is less a criticism of her and more the recognition of the animalistic power of Pam Grier.

Chen Ping and the film as a whole are let down by the at times overly hysterical script and some of the cast delivering performances that threaten to derail the whole movie, with Yueh Hua as Gao WenFai's cop friend particularly poor. This results in a further reduction in the level of intensity as it's hard to take  some scenes remotely seriously. Fortunately the cast of sleazy bad guys is exceptionally strong with Wang Hsieh as the S&M crazed big boss really standing out, giving the heroine a tough challenge and the viewer the feeling Chen Ping isn't going to have it all her own way, thus reinvigorating some of the film's lost intensity.

The film opens with a cool animated credits sequence and from there on in director Sun Chung strives to keep things visually interesting. Nam Nai Choi, who would later go on to direct many fan favourite Hong Kong films himself, plays a huge part in this, delivering his customary stylish cinematography on a budget, by utilising different angles, lenses and lighting and making the most of what was available to him. The action sequences are superbly handled, especially the shot gun blasting finale, and Chen Ping proves more than capable in them.

The Sexy Killer is pure exploitation, it features a repeated anti drug message that never once rings true, indeed it becomes amusing after a while. As soon as the opening credits finish, it's nudity, sex and violence all the way. While the film as a whole may not be as good as Coffy, it delivers more of the good stuff than Hill's classic, and that is surely enough to make it a huge recommendation to all you lovers of trashy cinema.

The sequel has even more action. Originally, Yueh Hua was supposed to play the villain in the sequel, his first such role, but apparently something was changed and he ended up reprising his role here. Basically, Chen Ping's character is in prison and Yueh Hua gets her out on the pretense that she help bring down this drug lord who has drugs smuggled hidden inside women's vaginas.

Hey Brian, I'd love to see the sequel but can't find the thing anywhere!

The sequel is called "Lady Exterminator" and the only copy that exists among fans is a bootleg that was filmed off a cinema screen, probably sometime in the 80s (and probably somewhere in the Middle East or Africa as it has Arab and French subs). I'm with Brian, I so wish it would get a release!

A friend of mine told me somebody he knows supposedly has a 35mm of LADY EXTERMINATOR dubbed.

The problem is that this guy isn't easy to deal with. And in fact he doesn't seem to wish to deal with customers or fans at all for the time being. He did, however, at one point state that he does have a print by that title. The problem is just it could be the Indonesian film of the same title. But since he has so many other HK film prints my bet is it's the HK film (but I could be wrong of course).

Is it really like Coffy that much? If so, is the soundtrack anything like coffee's? Blaxploitation soundtracks are definitely my thing.

A. The film really IS Coffy, the soundtrack however is definitely not. If you're a Coffy fan you should see it for sure.

Great write-up! Will have to check out both movies! Loved Coffy.