Something a little different for this post, I've started a new project to build a media PC and server to play dvds, blu rays (both region free), Hd-dvds and distribute music and movies over the network around the house. I always intended to feature more tech posts on the blog but the movies keep getting in the way, so this little series will hopefully inspire a few more.

Rather than build a new PC from scratch, I decided to go with the HP Proliant Microserver as the base for the machine. For approximately £250, you get a dual core AMD processor, 2GB of Ram and a 250GB hard drive. The best part is that at the moment you can claim a £100 cashback from HP when you buy one, resulting in a real bargain. This is what it looks like. 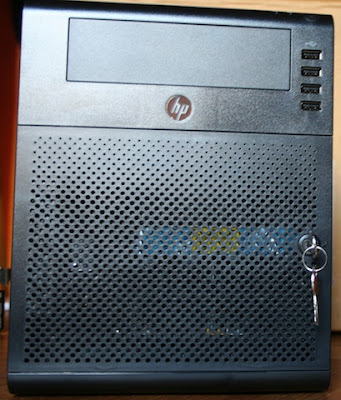 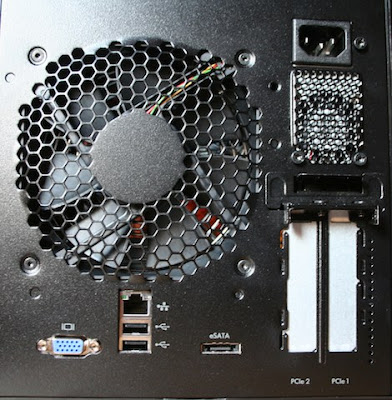 Inside, four sata hard drive bays as well as the extra optical drive bay at the top which can also be used for extra hard drive(s). 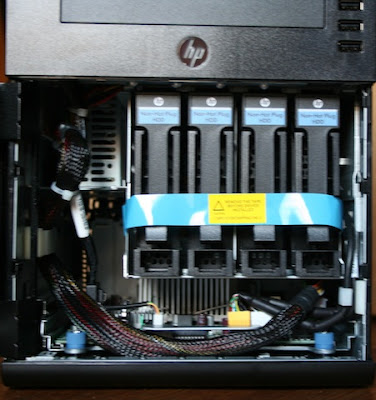 To give the unit the required power and facilities I'm adding the following :

ATI HD6450 graphics card, although a budget card the GPU is more than capable of handling 1080p video, importantly taking all the work away from the low powered CPU in the server.

4GB of Ram, bringing the total to 6GB.

I'm also swapping out the hard drive for a higher capacity one,  a 750GB for now. I intend to add more drives as and when I can.

Finally, an LG blu ray writer that will also read the hd-dvd format.


The first job was to remove the standard bracket from the graphics card and replace it with a low profile bracket so it would actually fit in the case. This is quite a straightforward job and involved removing a screw from the card itself and then the DVI socket screw grips, the bracket just gets replaced and the screw grips go back on and hold the bracket in place.

Onto the actual microserver, in order to strip it down release the hard drive caddies, then slide off the lid by undoing the thumbscrew at the back and push the lid forward to release it. The motherboard itself slides out on a tray, to get the tray out release the two blu thumbscrews at the front and remove all of the connected cables one by one. This is by far the trickiest part as the mini sas lead in particular is a real bitch to release. It may help to snip the cable ties. Once these are all disconnected gently slide the tray out.

Once the board is out, I installed the extra memory and the graphics card. Before sliding the board back in, another little job was to remove the blanking plate covering the Pci express slot on the back of the case, so the card can slot in when the board goes back in. Next it was just a matter of sliding the tray back in and reconnecting the cables, which was much easier than disconnecting them! At this stage I also added a sata cable and a molex to sata power adaptor for the optical drive.

Next job was adding the blu ray drive, connecting the cables to it and removing the drive plate from the lid of the case. Add the hard drive caddies back in and put the lid back on and it's finished!

All together this took around two hours but at least an hour of that was struggling with that bitch of a cable, at one point I thought I'd actually broke it, that aside the process was pretty simple and painless.

With Windows 7, AnyDvd HD, and Total Media Theatre installed, the all region dvd and blu ray side of things is taken care of and MakeMKV makes it easy to rip video to the MKV format and then playback with subtitles, very handy for discs where English subtitles aren't on the disc such as for the recent Le Samourai blu ray I posted about.

Stop press : The £100 cashback cheque arrived today, it took a while but it is a genuine offer!
Posted by A hero never dies at 6:55 PM

Wow, I feel like I've opened an issue of Wired ! This stuff is well beyond my scope... Mart, I'm thinking you're a sys admin in regular life ?

love the techie post. I hope you do more. I'm an undercover geek myself. Pretty neat that the system board slides out of the chassis. Congrats, that HP system you bought is a steal of a price! Any plans to overclock the CPU if possible on that board? I haven't run an AMD processor in years (K6-2), hope these dual cores don't run hot, but that fan looks pretty beefy, though. Makes me want to build a media center myself!

Something like that Wes. It isn't that complicated really though, it's more about having the confidence to get stuck in, for a long time I didn't feel I had the skills to do something like this but if you have a go it's surprisingly easy, that one bastard cable aside!

Glad you liked it mr c, it's a great little system for effectively £150 plus the extras. I'm not planning on overclocking it as for what I'm using it for it doesn't need it. The one mod I am considering is to change that beefy fan, it's a little noisy although it really isn't too bad.

Thanks for a great article. Have the same thing planned for my Proliant. Will the HD out from the graphics card provide audio? Surround or just Stereo? Thanks again.

Thanks Anon. The HDMI port on the graphics card will output the sound, mine is only set to stereo into my TV but depending on hardware and drivers, you can get surround into an AV amp. Let me know how you get on with your build.