The Grandmasters Finally Has A Release Date

After news broke last week that Wong Kar Wai's long delayed Ip Man film The Grandmasters would miss this years major film festivals, it finally has a release date of the 18th of December 2012. The danger is with multiple Ip Man movies already released and another of Donnie Yen's being prepped, will  the movie going public care anymore about this one? Wong Kar Wai has long had a reputation for delayed projects, and I'll be interested to see what kind of a welcome the film receives later this year, IF it does indeed make it's scheduled date. 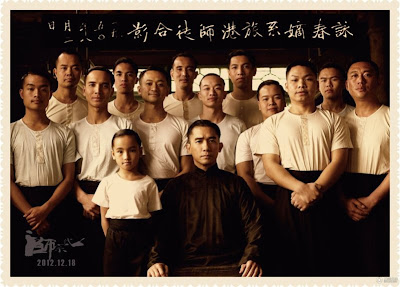 Despite all the delays and problems the film has faced, I'm still really excited to see it, the new promo photo above looks great and after all it's still Wong Kar Wai.
Posted by A hero never dies at 6:21 AM

Thanks for breaking the news re the release date. And I, too, am/remain very excited about this film... :b

I get the feeling Wong Kar Wai is going to be under real pressure come December, given the seemingly more commercial nature of this project and the time it's taken to make, he really has to deliver. I'm confident he will!

The only meaningful release date of a WK-W film is the date it's actually released. All the rest are wishful hopings.