H.B.O's Tales From The Crypt Season 1 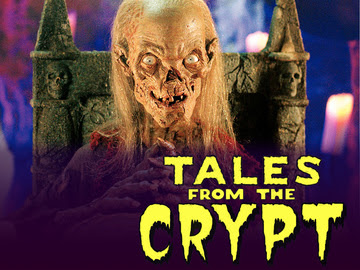 Beginning in 1989 and running for seven seasons H.B.O's Tales From The Crypt was somewhat of a landmark in TV horror thanks to it's presence on the premium cable channel and the freedom that allowed. Compared to it's 80's contemporaries, Crypt featured sex, nudity, violence and bad language to varying degrees and this in addition to the stories taken from EC comics, including Haunt Of Fear, Vault of Horror, Shock SuspenStories, Crime SuspenStories and of course Tales From The Crypt itself, made for an entertainingly ghoulish 25 minute (approx.) show.

Produced with the involvement of a number of Hollywood big shots including Richard Donner, Walter Hill, Robert Zemeckis and Joel Silver, the show also featured huge stars both in front of and behind the camera. Having Hollywood A list stars appear in TV, although common these days, was very unusual in the late 80's and as you watch the shows the calibre of talent involved is still surprising. 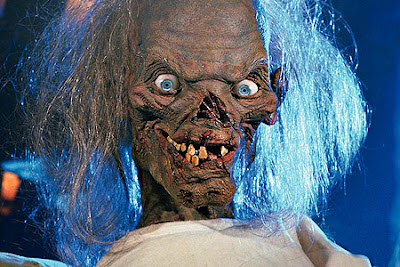 Every show begins and ends with pun heavy comments from The Crypt keeper voiced by John Kassir, which could become tiresome for some viewers, but personally I love them. The stories are largely predictable but as they're based on stories around sixty years old, I don't think this is too much of an issue. I loved the comics as a kid and to see such handsomely presented adaptations of these stories is still a thrill for me. 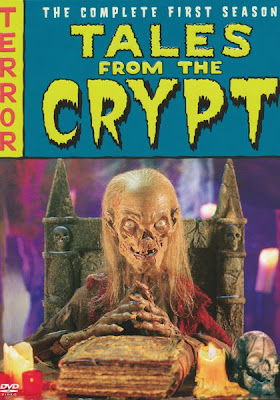 I'm covering the show a couple of episodes at a time, I'm not sure exactly what form this will take, it will depend on the episode I suppose but I hope to work my way through from start to finish.

Episode one : The Man Who Was Death

Synopsis : Prison executioner Niles Talbot (Sadler), is devastated when capital punishment is prohibited and he loses his job. He loves his work so much he carries on brandishing his own justice, utilising his well practiced skills on murderers who escape the law. 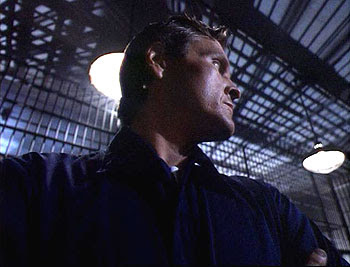 A perfect example of what is to come to introduce the show to it's audience, it's completely obvious how the story will end but it doesn't matter as it's such a fun ride. Sadler, a really good actor who should have been a bigger star than he is, is great as the executioner who loves his work a little too much. He brings out every ounce of black humour present in Walter Hill and Robert Reneau's adaptation of the story. By directly addressing the viewer, Sadler draws you in to the episode and makes you feel the inevitable twist when it arrives. The Man Who Was Death features a cool Ry Cooder score and some atmospheric photography. A solid start.

Note : William Sadler must love Tales From The Crypt, aside from his appearance here, he went onto appear in another episode and both of the spin off movies.


Episode two : And All Through The House

Synopsis : On Christmas Eve Elizabeth (Mary Ellen Trainor) kills her second husband for the insurance money, now all she has to do is dispose of the body. This turns out to be more difficult than she anticipated, having to deal with heavy snow, a young daughter so excited about Santa she won't stay in bed and oh yes, a deranged asylum inmate dressed as Santa and killing local women with an axe! 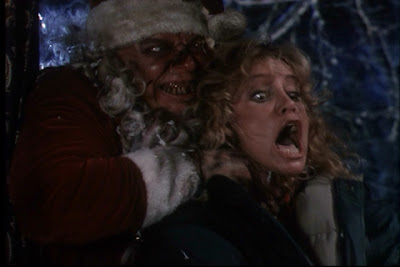 An excellent episode, superbly written by Fred Dekker who manages to retain a Christmas feel despite the distinctly unseasonal behaviour on show. The cast deliver finely judged performances that are pitch perfect in line with the show's tone, with Trainor staying just the right side of hysterical (Boy can she scream). Larry Drake's grinning maniac is huge fun, hitting the right balance of being scary and amusing. The episode could have perhaps seen the gore quotient a little higher but the nasty feel is well maintained from start to finish. It looks stylish too, thanks to Zemeckis' direction and Dean Cundey's excellent photography, utilising the tight 4:3 framing to good effect. It also has a solid score from Alan Silvestri and the Christmas feel is enhanced further with the Nat King Cole song "Chestnuts roasting on an open fire". Just one negative really, this must have the most fake looking snow I think I've ever seen in film or TV.

Note : The story was filmed previously for the 1972 Amicus film tales From The Crypt and starred Joan Collins and Oliver Macgreevy.
Posted by A hero never dies at 7:13 PM

This show was why I begged my parents to get HBO. Great review!

Fantastic stuff Mart, I'm looking forward to more of these. I almost picked up the entire collection (sight unseen and still have not seen a single episode) a few years ago in an Amazon sale, but ditched it at the last minute over negative reviews of the transfers - I wonder could these be upgraded now like the forthcoming Star Trek The Next Generation BR collection ? I watched a few episodes of Freddy's Nightmares over on Horror last year but are pretty weak - nothing like the talent involved in Crypt. Let us know what you thought of the transfers...

Thanks Alex, I saw a few of the episodes back then but not too many, so I'm enjoying this blast from the past.

Wes, I'd be very surprised if the show was ever to be upgraded like STNG, obviously doesn't have quite the same fanatical fan base. it's not completely out of the question as it was shot on film. I don't have the dvds myself, so I can't say but the image looks about what you would expect for TV of this vintage.

Very good! I just got all the seasons and started looking at them yesterday. It a really nice to watch them again after all these years! Thanks for reminding me!

Thanks Jesper, I hope you enjoy them as much as I am so far!

I sure do! I was afraid that they would have aged badly but that was certainly not the case. You got me inspired so I've decided to review them as well, not all the episode, only my favourites but anyway its a great show I can watch over and over again!