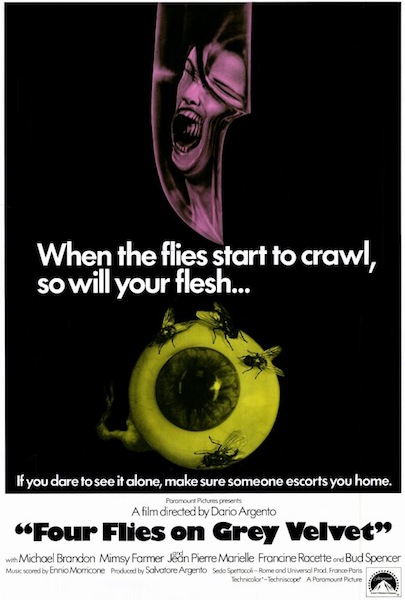 The third part of Dario Argento's Animal trilogy, following The Bird With The Crystal Plumage and The Cat O'Nine Tails, Four Flies On Grey Velvet had long been the missing link in Argento's filmography for most of his fans, at least until recently. The film has the definite feel of a bridge between his earliest movies and his mid seventies work. By combining new techniques and styles within a thriller storyline, albeit one given an interesting spin, the result is a flawed film but one that has much to recommend it, particularly to the director's fans. 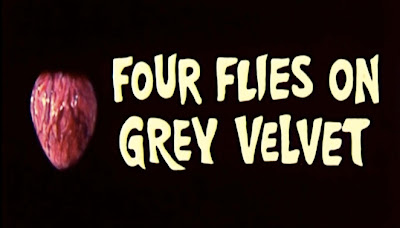 Roberto Tobias (Michael Brandon), a drummer in a rock band is being stalked by a man, having had enough he confronts the stalker and during a struggle kills the man with his own knife. A mysterious masked photographer is also present during the incident, taking pictures with meticulous detail. Rather than go to the police and confess, Tobias keeps quiet but struggles to cope with the weight of guilt, suffering sleepless nights and a vision in which he is beheaded. Things become even worse when he begins to be taunted about the killing, receiving mail and sinister phone calls before finding the photographic evidence planted in his own house. Still Tobias waits it out, his wife Nina (Mimsy Farmer) can do nothing to change his mind, even when their maid is murdered for being nosy. Instead Tobias hires a private detective (Jean-Pierre Marielle) to find the culprit, what he discovers is that things aren't always as they seem... 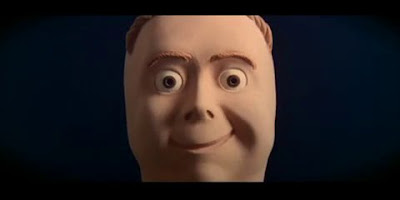 It has a slightly saggy narrative in common with the second entry in the trilogy, The Cat O'Nine Tails, but don't let that put you off, for me it's a significantly better film than that one. Four Flies On Grey Velvet also lacks the elegance and pure class of The Bird With The Crystal Plumage, and the punch and frisson of the later, personal favourite of mine, Deep Red. The film is the first of Argento's movies to focus on how the story is told, as much as the actual story itself. Argento has long been criticised as being a style over substance director, which I've always believed to be a little unfair, particularly during his heyday. It has to be said though that the narrative is a little sloppy in it's construction, as a mystery it gives little for the viewer to go on and the solution revolves around an idea introduced very late in the film, leading to the film's title. The idea being that the retina of the human eye captures the final image it sees before death and can be retrieved to help identify the victim's killer.

Argento utilises many stylised techniques during Four Flies, from unusual camera placement and angles, his famous roving camera, non linear editing and special camera trickery all to achieve the effects he wanted. Nowhere is this more prominent than the stunning final sequence of the film, where an ultra high speed camera is used to create an incredible slow motion shot, and combined with Ennio Morricone's score, it makes for a breathtaking scene.

The two leads are solid, I was surprised I liked Brandon's performance, never an actor I've had any affinity for, he was a great choice for this film. While he feels cold and distant during the film, come the end of the movie, it makes perfect sense. Mimsy Farmer is always an interesting presence but again like Brandon's, her performance makes you wonder during the running time but makes perfect sense once you have finished the film, if anything she doesn't have enough screen time. Jean Pierre Marielle does exceptionally well to get the viewer so invested in his character, considering how ridiculously broad a caricature his gay detective is. The film has too many supporting characters, almost as if there were to be more red herrings in the mystery, that were then changed to comic relief instead, and unfortunately interrupt the tone and flow of the movie. 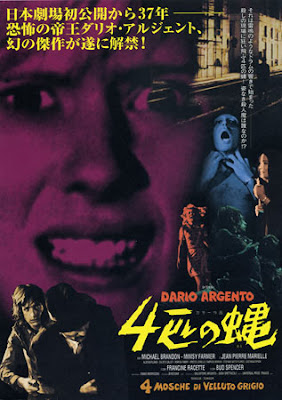 Four Flies On Grey Velvet ultimately has an experimental feel to it, with Argento searching for his voice and looking to push his own boundaries as a filmmaker. While good in it's own right, the film is perhaps more successful as a stepping stone and is thus an important film in the Argento canon, it is of course only within the last few years that the majority of his fans have been able to discover this for themselves.
Posted by A hero never dies at 7:01 PM

A "stepping stone" is a good summation, Hero.

An excellent examination of FOUR FLIES, although admittedly I may like it so much because it so closely echoes my own feelings toward the film! Especially, your comment about being "surprised how much" you liked Brandon's performance, just about exactly mirrors my own thoughts. At the film's beginning I thought he seemed seemed disinterested and was badly miscast, but before long I realized he was just about perfect for the part.

About the mesmerizing Mimsy Farmer, she discusses working with Argento on FOUR FLIES, as well as many more of her Euro films and directors, in the lengthy interview that was published in a recent issue of Video Watchdog magazine. I'd like to let folks know that interview (her first-ever career length interview) is available to read -- FREE and in its entirety -- for a scant few more days on the videowatchdog.com website! VW has made it available to celebrate its nomination for a 2011 Rondo Award, so enjoy the article, spread the word, and help Mimsy's piece win the Rondo for "Best Interview" by casting your vote at rondoaward.com! Lots of other cool fun horror categories to vote in too, but voting closes (and the article vanishes) at midnight on April 1st!

And yes, I am the author/interviewer, so this is something of a "shameless plug"... :-)

Plug away! As a reader of Tim Lucas' excellent Video Watchdog since the very first issue, it's a real thrill for me to receive a comment from a contributor to the magazine. I held off reading your interview until after seeing the film (in case of any spoilers). Thank you for your very kind words and fingers crossed that you win, you certainly have my vote!

Getting back to FOUR FLIES, I think Mimsy's recollections of that film are some of the most fascinating parts of the interview. Her account of the car crash scene being the only time she ever felt in danger on a movie set, and certainly her memories of Salvatore Argento, are revealing glimpses into the nature of the film business.