The Tactical Unit series of five films spun off from 2003's Johnnie To movie P.T.U are somewhat of a mixed bag. Produced by To and all made on low budgets, and originally announced as made for TV features (I'm not sure if they were ever broadcast), Tactical Unit : Comrades In Arms went on to gain a theatrical release in Hong Kong, while the others were released to dvd and more recently blu ray. My personal pick of the films is Human Nature, for me it is by far the most entertaining of the series, featuring more action and humour than the other entries. 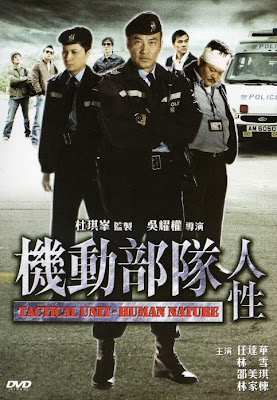 C.I.D officer Fat Tong (Lam Suet) is in all kinds of trouble, the most pressing of which is he's up to his neck in debt to a loan shark (Gordon Lam Ka Tung). The loan shark is not only pressing Tong for his cash but threatening to report him to his superiors. When called to attend the crime scene of a robbery, Tong is tempted by some literal blood money left behind, seeing this evidence as a way out. Inevitably an investigation is launched into the missing money and the pressure on Tong increases on all sides. Help is on hand from P.T.U officer and friend Sam (Simon Yam) but in his efforts to get himself out of his own mess, Tong only gets dragged in deeper and deeper as he becomes unwittingly embroiled with the gang of Mainland thieves from the film's opening robbery. 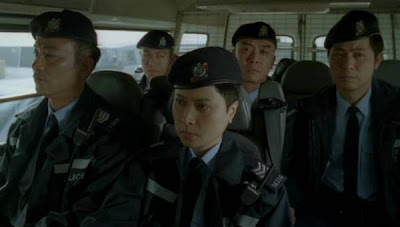 While worthwhile to Milkyway Image and P.T.U fans in particular, the Tactical Unit series' roots as TV are difficult to hide, aside from Law Wing Cheong's higher budgeted Comrades In Arms, Human Nature is the best looking of the films. Director Andrew Ng tries hard to make the film as stylish and dynamic as possible and overall does quite a decent job of it, mainly through excellent location shooting and a couple of pretty good shootouts, don't get me wrong we are not talking John Woo or Johnnie To quality here but I've seen much worse in much higher budgeted movies. 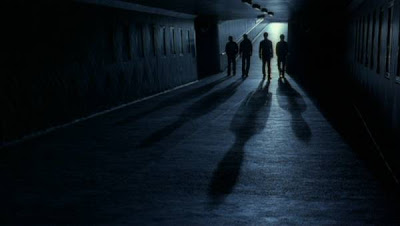 The series' themes of balancing the ambiguities of right and wrong and making the right choices are all present and correct and are interestingly handled, what is different in this film is the addition of some much needed humour. While the P.T.U squad are played very straight, particularly by Simon Yam and Maggie Shiu, Lam Suet and Gordon Lam Ka Tung are a riot together as Lam's Loan Shark seeks to humiliate Tong at every opportunity. 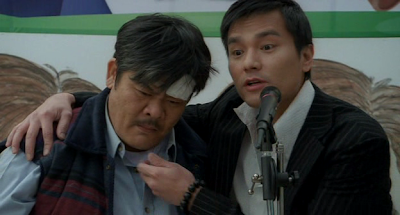 It's with the performances that the film shines, with Lam Suet finally getting a turn with a leading role, so long he's been the scene stealing background character in many of Milkyway's productions (as well as many others). For him to have to carry a film must have been quite a challenge for him, and he does really well, convincingly selling the all of the weakness, fear, stupidity and eventually courage he shows throughout the film as well as the more humourous aspects of his character. Suet is given excellent support by the ever reliable Yam, the amusingly horrible Gordon Lam, and the leader of the robbers Ng Ting Yip.

For anyone interested in giving the Tactical Unit series a go, this is where I would start, while there is an order to the films it doesn't really make much difference seeing them out of sequence and if you don't like this installment, it's unlikely you will get much out of the other entries. As long as you don't expect P.T.U 2 they all have some merit but Human Nature is the most entertaining, and that's without mentioning Fat Tong's driving skills.
Posted by A hero never dies at 7:20 PM

Thanks for the review. You've made me interested in checking out this movie.

Re the other "Tactical Unit" works: I saw "Comrades in Arms" and reckon it's particularly enjoyable for people who have been hiking in Hong Kong.

I also made a beeline for the works directed by Lawrence Lau (aka Lawrence Ah Mon) since I'm a general fan of the director. And while I wouldn't say that they rank among his best films, they still do have things to recommend -- though I'd also add the caveat that the one set in Yau Ma Tei with Derek Tsang certainly does have parts that are hard to watch...

Thank you, I hope you enjoy the movie, as I said I found it the most enjoyable of the bunch. I may revisit the entire series I'm not sure yet but will certainly be doing Comrades in Arms at some point. I can see why you would have enjoyed that one, the HK scenery is extremely well used in it.
No Way Out is the one you are referring to, and it is indeed a tough watch. I'd even go as far as to say it's one of the most depressing HK movies I've seen, due to the level of realism employed in the film making and the sympathetic characters. After finishing it I remember thinking I would probably never sit through it again, and not because of it's quality, we shall see.

NO WAY OUT is excellent and with the social commentary feels much more like a proper Lau film than a genre entry (it is also his best film since MY NAME IS FAME, even up till now). The other one by Lau isn't really good though. HUMAN NATURE is fun but kind of sloppily made. The two by Law Wing-Cheong are serviceable but forgettable. Overall I am glad we got NO WAY OUT out of this series and they're all entertaining on some level or another, but (except NO WAY OUT) nothing tow write home about.