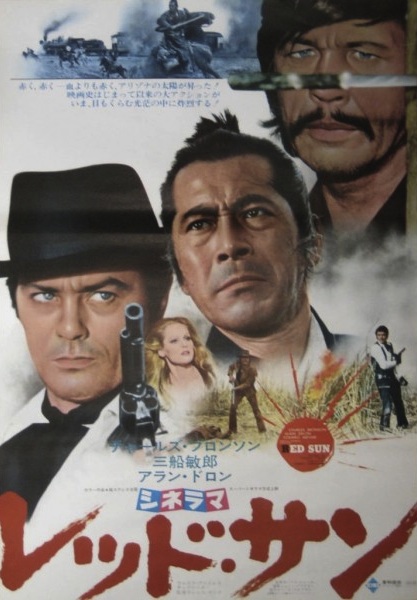 Bronson, Delon, Mifune, three of the greatest names in genre cinema, if only someone had thought to put them all in a film together, wait a minute they did! In Terrence Young's 1971 multinational western Red Sun. Throw into the mix the original bond girl Ursula Andress and the only logical answer is yes please.

Link (Bronson) and Gauche (Delon) and their men target a train for a robbery, on the train is a Japanese ambassador on his way to give the US president a gift (a valuable gold sword) from the Japanese emperor. Gauche steals the sword and double crosses Link, in the process killing a Japanese guard. Kuroda (Mifune), the remaining guard is forced to team up with Link to track down Gauche, Link wanting the stolen money and Kuroda his head. At first distrustful of each other, the two men must put aside their vast cultural differences to find the man they seek. They track down Cristina (Andress) hoping she will bring Gauche to them for the inevitable confrontation. 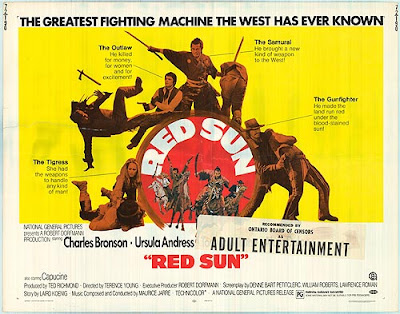 A multinational western, incorporating the traditional iconic figures from the Eastern and Western versions of the genre, also featuring the French version of Le Samourai, brought together by European money, a British director and made with distinct European Western sensibilities. Quite a mix.

Unsurprisingly the film's strength is it's cast, with all the leads working wonders with what they are given, Bronson has rarely been as funny, Mifune's stoicism and stubborn streak is hilarious and the scenes the two share as they butt heads and try to outwit each other are comfortably where Red Sun works best. Delon is great too, albeit with much less screen time, playing the villain with devilish glee. Andress has little to do but look pretty, but she's good at that so it's enough. The movie also features a smattering of violence and even a little nudity (including Andress briefly). 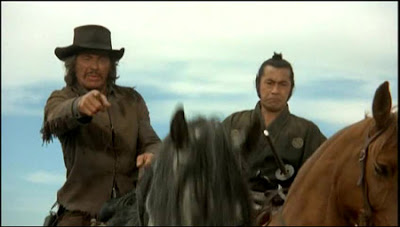 So far so good, yet something is missing, something that prevents the film becoming the sum of it's parts. Firstly, the direction from Terence Young is lifeless, the man who made some of the very best James Bond films should have done better. In fairness I have only seen the movie full frame so it could be that losing the widescreen framing affects this but I'm not sure. Most of the action scenes aren't very exciting either, with the exception of the ending set in a corn field, which is nicely done. 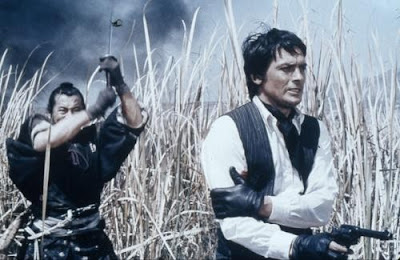 Red Sun's biggest problem though is the muddled script, it starts out fine, about half way in though the story becomes muddled and the film begins to drag a little, before picking itself back up for the finale. A good fifteen minutes could have easily been snipped to make the movie more punchy and would have done wonders for it. The film also looks quite cheap in places, as though they ran out of money and thought the actors were enough to carry it through anyway. 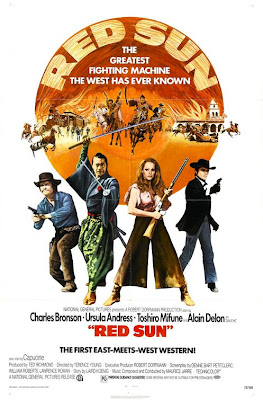 Could Red Sun have been better? Yes. Should Red Sun have been better? Definitely. Still if you are a fan of any of the leads (and surely you must be to be reading this blog), the movie is worth your time, the chemistry on display between Bronson and Mifune is worth seeing the film for alone. In addition to this the film has a few interesting ideas (mostly wasted unfortunately) about the western genre and it's international variations, and while superficially entertaining, ultimately Red Sun has to be classed as a disappointment. Given the incredible cast and the fun performances they give, the film still lacks a vital spark. A real shame but perhaps not surprising as the expectations were always going to be sky high given the talent involved.
Posted by A hero never dies at 6:23 PM

Ah! I see you got around to this. Your view on it seems to be exactly the same as mine.

After writing my review way back when, I found a clip on youtube of John Landis talking about being on the set of Red Sun. He goes on to say how everyone on the set was very excited because Toshiro Mifune was coming and they have not met him before. When he came out of his car, everyone reacted to "this shrimpy little guy Mifune?". However, after he came back from wardrobe and Mifune was dressed in his samurai outfit, he looked as impressive as he does in the films.

Always wanted to see this one, because the idea of having both Bronson and Mifune on screen at the same time seems surreal. Great review!

Toshiro Mifune AND Charles Bronson together in a film? This has to be the greatest movie ever. Thanks for reviewing this!

Yeah, I've always wanted to see this one, but I'm sure the R2 UK DVD botched the OAR as you hinted in your great review Mart. An incredible cast indeed, bizarre even but then that was the joys of the international co-production. Mifune does very well squaring up to Westerners, he was great as well in Hell In the Pacific... Mifune vs Marvin, phew !

A. Great to hear from you, I thought about you when I wrote this, and I'm really missing your posts. I'd love to see that clip if you could dig it up that would be great.

rG, Their scenes together are fantastic, it's definitely worth tracking down for them. Thanks man.

Alex, It really could have been but unfortunately isn't, still good fun though.

Wes, Yes the dvd was full screen. I thought the most recent release was in the OAR but I'm not 100%. I also thought this was the version Lovefilm had as they use that cover, when it arrived it was an older Cinema club disc.

Unbelievably I've never seen Hell in the Pacific, which as a huge Marvin fan is something I'm quite rightly ashamed of and something I must correct asap.

Found that interview with Landis
http://www.youtube.com/watch?v=Ai2g39UXF2g

Conversation about Red Sun and Toshiro starts at 9:00.