A series of HK movie synopses regurgitated verbatim from the dvd/vcd/laserdisc cover, or in this case the even more useless than usual Databank "special" feature on the dvd itself. 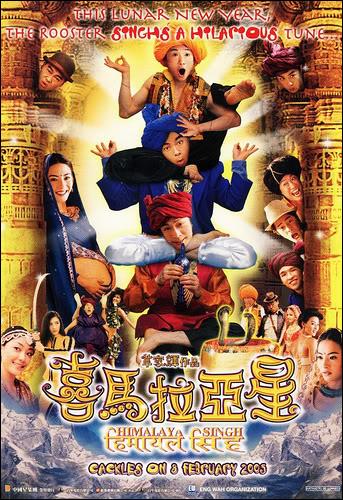 Singh (Ronald Cheng) is borne and grown up in Himalayas and has reached the ultimate stage in Yoga. He goes to participate the India Beauty's husband-to-be contest. He meets the wanna-be-married Tally (Cherrie In). Tally proposed to induce Singh to be a rotten, so India Beauty has a bad husband. Uncle Panic (Lau Ching Wan) goes traveling to India with his two nephews (Shine). Uncle Brave (Francis Ng) who is one of the tourists has absolutely opposite character. Uncle Panic bumps into several India robbers who hypnotize him and was brought into the Journey of Illusion by The Peacock (Cecilia Chang). Uncle Brave and the two nephews gulp down India Magical Oil accidentally and lose their memory. King of Yoga recognizes Uncle Brave is Singh mistakenly. Dramatically, Singh, Uncle Panic and Uncle Brave fight in the contest. Who can win? Or is it only a dream?

Exterminate all rational thought, ha, ha... I read this one a few times and it short-circuited me each time. Have you seen this one Mart ? It sounds like a Jodorowsky film from an alternative dimension. Uncle Panic - that would make a great name for a band...

I've been holding off on seeing it Wes, expecting it to be horrible and it kind of was when it started but I've had to leave it around halfway through for today and I'm kind of coming around to it, will post more when I've finished it.