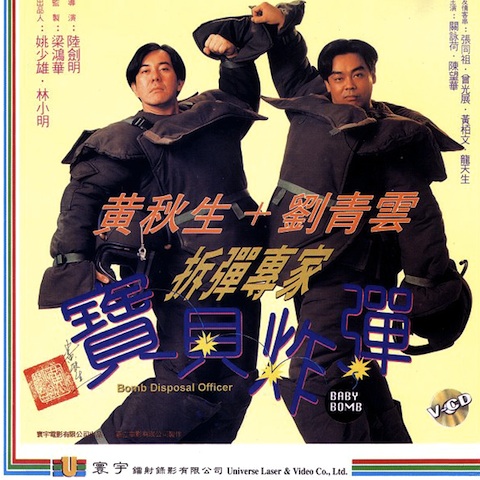 Jamie Luk's 1994 film Bomb Disposal Officer Baby Bomb sports one of the more unusual English language movie title translations that I've seen, and the film itself continues the offbeat tone established by the title throughout it's running time. Luk had a habit of making amusing low budget movies, this is the second one I've covered after The Case Of The Cold Fish. While Bomb Disposal Officer isn't as good a movie as that later film, as much of the comedy is a little too broad in comparison, there is still more than enough here to enjoy here if you're in the right mood. 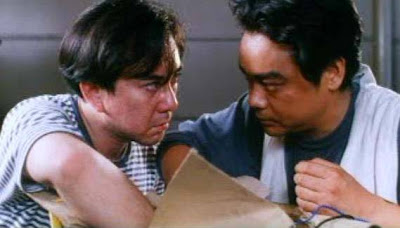 A crazy bomber is on the loose in Hong Kong, planting home made bombs around the city. John (Anthony Wong) and Peter (Lau Ching Wan) are the bomb disposal officers called to defuse the bomber's work. The two men are best friends and flatmates, and enjoying their carefree single lives, then they meet Mary (Esther Kwan), a similarly free spirit. After a drunken night of partying, the three awake in bed together. Mary later finds she is pregnant and either man could be the father. John and Peter bicker over who is the father of the child, neither wanting to take responsibility. The bomber makes things personal when he targets the bomb disposal unit, raising the stakes higher and higher as he kidnaps Mary. 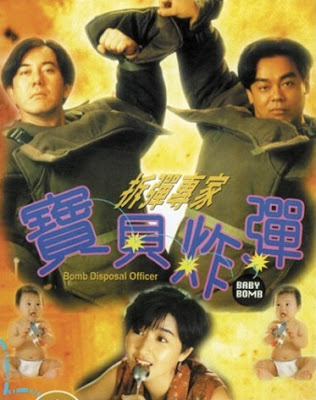 Essentially a romantic comedy, the kind that Hollywood loved to make in the 90's but of course done Hong Kong style, so instead of something soft for our leading men to overcome before the obligatory happy ending, here we have a bomber who blows up a child in the opening sequence! Much of the fun in Jamie Luk's film comes from the casting of Anthony Wong and Lau Chung Wan in the lead roles. The two share great chemistry and are completely believable as best friends, Lau Ching Wan in particular has a real flair for comedy. Esther Kwan makes a good foil for the two leads and again, the chemistry between them is very natural. The dramatic scenes don't work as well as the comedic ones do, and often feel like they could be from a completely different movie but it's all part of the charm of Hong Kong cinema.

It should almost go without saying but if you're a fan of either of the leads, you should certainly give this a go. If not, it's disposable for sure but Bomb Disposal Officer Baby Bomb is well worth a look for Hong Kong fans looking for something a little different. After all where else can you see Bunman pulling (really) awkward shapes to a Christian singalong?
Posted by A hero never dies at 7:11 PM

That really is one of the strangest film titles I've ever seen. lol. But great review nonetheless! Keep it up!

Thanks rG, believe it or not the title does kind of make sense when you see the film.

Tom, It kind of sums up the movie's goofy charm!

Great selection Mart... it sounds like fun. This is the kind of romantic comedy I would like to see over the glut of Hollywood stuff. That English title is amazing though - anyone know what the original Chinese title would translate as ?

Good stuff, needless to say I haven't gotten round to watching this yet...

Wes, Not sure what the original Chinese translates as , can't find any comment on that. I would love to have seen this remade by Hollywood, it would have been hilarious with Mel Gibson and Bruce Willis!

Don't go out of your way Dan, although it's worth a watch whenever you do get around to it.

Love Anthony's haircut in this - looks like Phil Oakey from the Human League.

Anon, It struck me that in the final scene all three leads have almost the exactly the same hair!

Yes, I'd just posted this and took another look at the DVD cover - all floppy asymmetrical bobs. What the hell was going on?