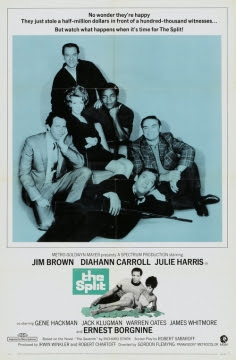 I've been desperate to see Gordon Flemyng's The Split for years, unfortunately it's another title that doesn't seem to have a legitimate dvd release available. Bootlegs are available on ebay presumably taken from TV broadcasts, I can only imagine the reason for it's unavailability is due to rights issues over the Quincy Jones score and the various songs that feature in the film. It's a real shame as The Split has a truly amazing cast but more on that later. 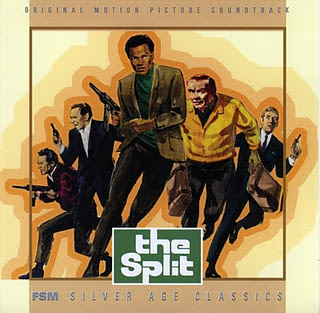 Adapted from Richard Stark's Parker novel, The Seventh, The Split is based around a heist at the L.A Coliseum during an American football game. Jim Brown plays the Parker character, here renamed as McLain, he learns of the opportunity to rob the stadium from old colleague Gladys (Julie Harris). In order to form the team to pull off the heist, McLain tests each potential member by pushing them as hard as he can in their fields of expertise. It gives an interesting edge to the proceedings as in 1968 it just didn't happen in film, that a black man would do these things to white men, certainly without apparent provocation. With the team assembled the heist goes down as planned but being a heist film you know something is going to go wrong, and so it does. McLain stores the cash at his girlfriend's (Diahann Carrol), she is murdered and the cash stolen, making a terrible situation even worse as this brings the police into the equation. The remaining gang members suspect McLain has stolen the money leading to an inevitable showdown, McLain being Parker though, all he wants is his share, and he'll do anything to get it. 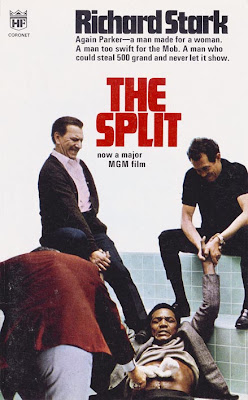 I can't go any further talking about The Split without talking about the cast. It is truly awesome, McLain's gang is made up of, get this, Ernest Borgnine, Donald Sutherland, Jack Klugman and Warren Oates. Not only that but Gene Hackman plays a dirty cop too! Talk about a dream list.

Flemyng more famous for directing the Peter Cushing Doctor Who Dalek movies from the sixties (as well as episodes from just about every British TV show of the era, including The Avengers comic book episode The Winged Avenger), does a decent job with the material but it feels a little TV movie like in places but does have a few nicely handled action sequences, in particular a smack down between Borgnine and Brown. The heist itself is pretty tense and the third act is superb, let down only by the quality of the print I saw, which left something to be desired.

Jim Brown makes for an interesting interpretation of the Parker character, he's hard enough but maybe lacking in the attitude required, don't get me wrong the dude has a tude, I'm just not sure it's the Parker one but I'd say Brown's is second only to Lee Marvin's Walker so far, will Statham's new version match up?
Having said all that, I loved the movie and in what seems to be a common lament on this blog, I wish it had a decent release available, in order to appreciate it fully.
Posted by A hero never dies at 6:08 PM

This sounds like something I would love. Great cast! Maybe MGM or Warners will put this out on an on-demand basis one day.

Mart, this is new to me but I'm gonna seek it out (have found a place where I can get it, although I think its the same quality version you saw). It sounds great. I love these 70's heist movies and Warren Oates is a huge favourite of mine. Looking forward to seeing it now... By the way Mart, have you seen Dark of the Sun from 1968, starring Jim Brown and Rod Taylor. It's a guys-on-a-mission film set in Africa, and well worth seeing. There's a Warners On-Demand DVD, but it deserves a much wider release.

Glenn, I think that's the only hope for a release of this, although as I said it could be it's a rights issue with the music.

Wes, Dark of the sun sounds like fun, I'll have to try and track it down. I'm sure you'll enjoy The Split, it's a shame the photography doesn't shine as it should due to the print though.

Man, never heard of this one. Since there's no word on the rights issues being resolved anytime soon, I'll just have to track it down on eBay or something. Sounds awesome!