A series of HK movie synopses regurgitated verbatim from the dvd/vcd/laserdisc cover.

That isn't a typo in the title, just part of the awesome cover for the Mainland Chinese dvd of Police Story III. Even with Mainland dvds it's rare to see an error in the title. 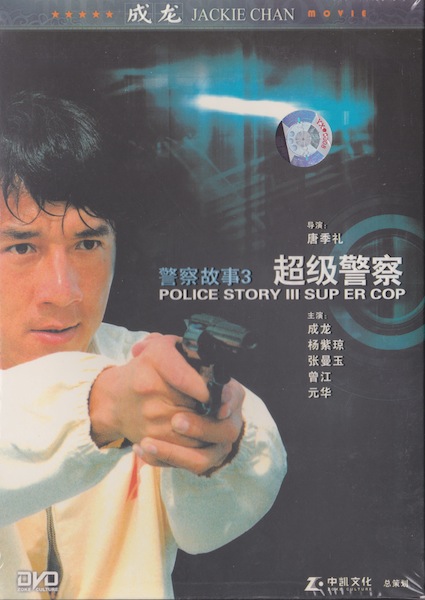 In this third installment,Chan reptises his role as maverick detective Chan Ka-Kui. He is recruited by Interoil to infiltrate the operations of a drug lord.He teams up with Michelle Yeoh.who plays a tough butt-kicking mainland Chainese cop. Together,the pair are forced to survive with their wits,courage and skills during the mot dngerous mission of their careers.
Featuring a perfect mix of death-defying stunts,fluid modern style martial arts sequences and a healthy dose of Chan's trademark comedic flair,Police Story 3 has been hauled as the perfect action comedy flick. Don't miss out on this to round up the superb Police Story trilogy!

Great spelling in this one!
Posted by A hero never dies at 4:26 PM

Ha, ha... I love this series ! I hate writing synopses for films so I hace alot of simpety for the poor fela who was.given this gig...

btw. I forgot about your question, to my shame the only one I got that you didn't know was the second one, which is Kill List. I do need to know what the Hong Kong film was though, it looked very amusing.

Mart, to my eternal shame, it's not a HK movie at all... it's Japanese - Takashi Miike's Gozu. I need to brush up on my geography (and my Takaski Miike evidently)...

I think I've only ever seen the first Police Story. I will definitely have to check 2 and 3 out for sure. I wonder if I can find some kind of triple pack here in the states? Is 2 any good?