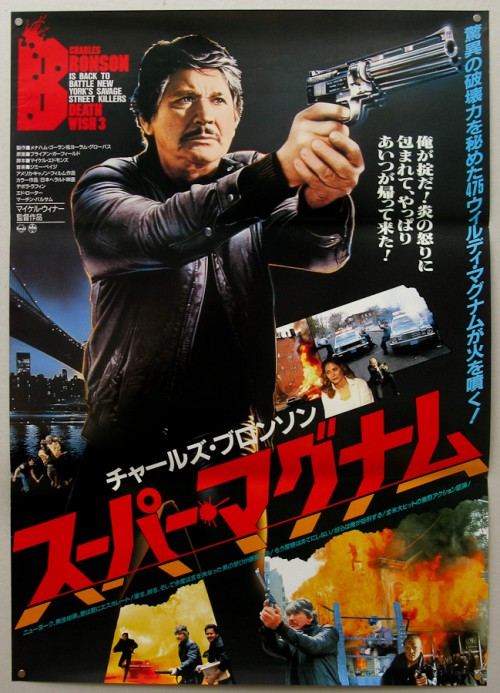 Having covered Michael Winner's original Death Wish back in June last year, I've used my editorial power to bypass the second similar but inferior movie and go straight to the all out insanity of Winner's Death Wish 3. Made over ten years after the first sequel, the film's production company Cannon and director Winner must have decided more of the same wasn't going to cut it with the mid 80's audience and so any attempt to inject the movie with genuine social commentary was jettisoned in favour of guns, more guns and bigger guns, along with a whole army of "punks" to use them on. The series' star Charles Bronson was reportedly less than happy with this approach, falling out with Winner in the process. 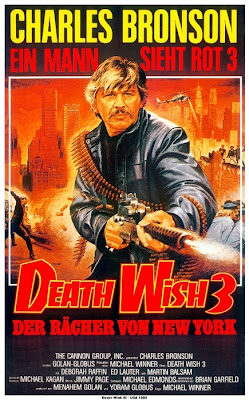 The script doesn't even really give us a story, Paul Kersey (Bronson) arrives back in New York to see an old war friend, who coincidentally is in the process of being killed just as he arrives. The cops mistakenly arrest Kersey and in a ridiculous series of exchanges with cop Shriker (Ed Lauter), ends up being "employed" to clean up the out of control neighbourhood. You see Gang leader Fraker (Gavan O'Herlihy) has taken over, terrorising the good folks with his men including The Giggler ("He laughs when he runs") and the future Bill S. Preston Esq. Holy shit, who wouldn't be scared?
Essentially that's it, Bronson becomes the kiss of death for just about anyone he ever speaks to, before the movie ends as a warzone, with military grade hardware substituted for any semblance of reality, subtle it ain't! 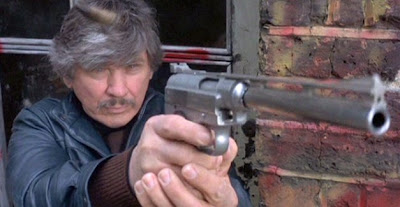 All of this of course is a great thing, Death Wish 3 is one of the most fun movies ever made, dismissed as trash by almost everyone who saw it back in the day, who didn't recognise it as the greatest comedy ever made. I refuse to accept that anyone involved ever thought they were making a serious film, as that would clearly make them insane. Filled to the brim with great villains, some of the most quotable lines ever committed to celluloid, and violence that's only outdone in it's outrageousness by the "punk" fashions on display. All this without mentioning Kersey's love interest Kathryn Davis, a city public defender, played by Deborah Raffin, who despite being approximately half his age, is desperate for some Bronson action. After a short but epic courtship, that puts Gone With The Wind in the shade, during which they discuss the merits of chicken for dinner, Davis, "I hope you like chicken. It's the only thing I know how to make." Kersey romantically replies,"Chicken's good, I like chicken", eat your heart out Mills and Boon! As is the case with many great love stories, tragically the budding romance is cut short (but not before Bronson has his wicked way, of course) when Ms. Davis is killed by a combination of head butt, car crash and said car exploding, while Bronson looks decidedly nonplussed. 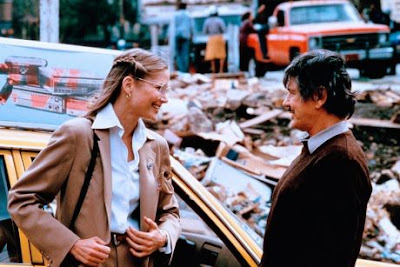 I could go on for days about the greatness of Death Wish 3, there are so many areas I've barely touched on here, including Bronson himself. If he was genuinely unhappy making this film then he's a way better actor than his critics give him credit for, as I don't think I've ever seen him seemingly enjoy a movie this much before. The film is decidedly 80's in it's attitude towards race but no more than hundreds of other films from the era, many of which demanded to be taken far more seriously than this amazing movie. Must stop typing now or I'll never stop..... 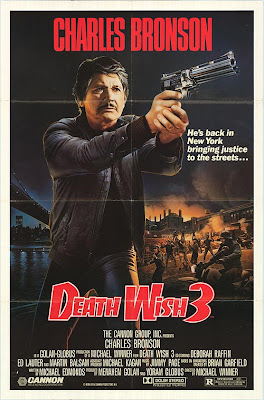 I recommend the book BRONSON'S LOOSE to you. It covers all the DW films. I recently recommended it on my blog.

@Phantom of Pulp - know the recommendation wasn't for me but I'll take it anyway. Thanks!

Rec applies to anybody, John :-)

Another favorite Bronson flick of mine is HARD TIMES.

Possibly my favourite of the "Death Wish" films, if only for the ending were it seems like everyone suddenly has guns, let alone the fact that Bronson's vigilante force seemingly are comprised of the oldest residents in the apartment block.

Really great and entertaining review man. The best read I've had all day. Believe it or not, I've never seen a Death Wish film before. I know, for shame! I just might have to make this one my very first Death Wish experience.

Great Japanese poster by the way. Is that yours?

And all of it shot on the savage streets of...London !

Great write-up of a Bronson classic! The body count in this is insane! haha.

A surreal classic, indeed. The most recent article I was able to squeeze out for my own blog was about this very movie:

I think everyone working on it took it dead seriously--that's one of the reasons it's so damn funny. There's never even a hint, from anyone, that the movie is pulling your leg.