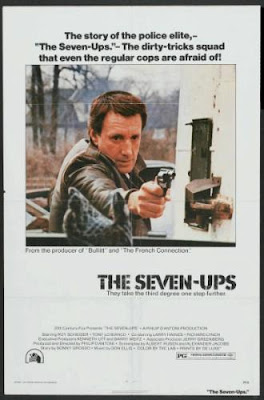 Philip D'Antoni's only directorial credit is The Seven-Ups. He's better known as the producer of Bullitt and The French Connection, and this film shares an equally gritty and grimy take on the American crime film. Starring the great Roy Schieder, Tony Lo Bianco and a number of genre favourites including Richard Lynch and Joe Spinell and based on a novel by Richard Posner.

The title comes from the team of cops led by Schieder, a squad who specialise in taking down criminals who will spend a minimum of seven years behind bars. To do this the team use unusual and shady tactics, most of which are frowned upon by their colleagues. Much of the intelligence used by Schieder comes from a snitch, his childhood friend, who has ties to the local criminal fraternity. During the course of an investigation Schieder discovers high ranking criminals are being kidnapped by men posing as cops. The Seven-Ups are suspected of being behind the kidnappings and Schieder and his men go after the real culprits, setting off a violent chain of events that blur the line between cop and criminal. 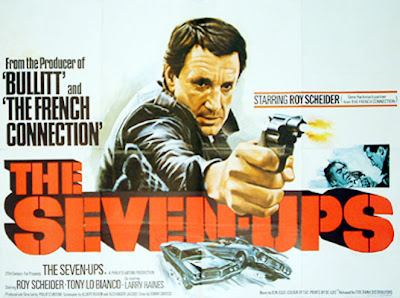 Initial impressions of The Seven-Ups were not good, the film opens on what at first appears to be a tense set up on a bust in an antiques store before turning into something out of a Keystone Cops farce. Things pick up quickly though and soon we're into the kind of milieu American crime cinema is justifiably famous for. The film's aesthetic is in tone with the film's content, full of muted colours and griminess, making excellent use of New York locations, completely unfamiliar to me. The cast is excellent, with Schieder as ever a standout and Tony Lo Bianco keeping up with him. Richard Lynch and Joe Spinell are also notable but it's the incredible skill of Bill Hickman that takes the plaudits. He plays one of the kidnappers  alongside Lynch, a stunt driver really, he was behind the famous car chase in The French Connection. Hickman playing an actual character gives a seriously dangerous feel to the stunning car chase featured in the film, to have close ups on the actor gives this particular chase a vitality lacking in so many other examples of what became such a cliched movie component, most of which became a chore to sit through. 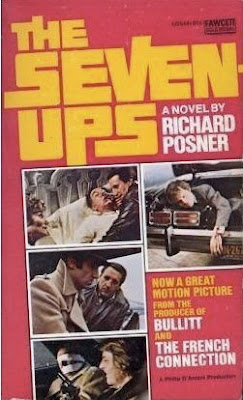 A really solid cop film, which despite a shaky start builds in intensity throughout it's running time, becoming increasingly gripping, nasty and uncompromising without being particularly graphic in it's violence. All this and one of the best and most realistic looking car chases I've ever seen.
Posted by A hero never dies at 6:56 PM

Love these old gritty crime films and am always down to catch one I've never seen, Seven Ups included. I will definitely need to make this one a priority. Great review man!

Good review! Thought this was a solid crime thriller. Roy Schieder was great as usual.

Though the car chase was great, my favorite sequence is the foreboding return of Toredano to his ramshackle home hard by the railroad tracks. I was curious about the location and did some digging. Seven Ups fans may appreciate the look back: http://betterbike.org/seven-ups.html