HKMS : Long Arm Of The Law 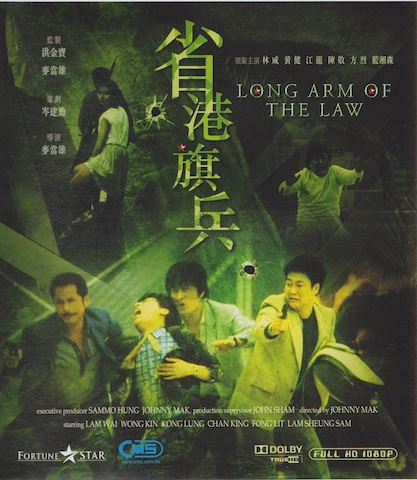 A series of HK movie synopses regurgitated verbatim from the dvd/vcd/laserdisc cover.

Just a quick warning, this synopsis is one of those that literally gives away every single detail of the film, I would strongly advise against reading this if you have yet to see this fantastic film.

In the lower depths of human societies, there they are. Call them Dirty Rats, or Big Circles. They lurk in the shadows of society, venturing into gray areas of right or wrong, toughened by facts of life, but apparently doomed to failure. But they are human beings too. Block Head who dotes on his son and tolerates his nagging wife. Chubby who is ever so kind to his grandmother. Chung who still loves childhood sweetheart Ah Sheung, now a cabaret hostess. And Rooster. And Bull's Eye. Their leader is Tung who has a perfect plan for a "job" in Hong Kong. In 48 hours, they are to cross the border, rob a jewelry shop and then get back across the border. Things start to go wrong at the border. They lose Bull's Eye to bullets and pouncing dogs. And a lone robber got to the jewelry shop one step ahead of them. With police converging on the spot, they get into a gunfight and have to do their best to escape. While they take a breather in a cabaret, Tung sees the fence Tai for a loan, Tai's condition: kill Fatso. The killing is done but Tung is alarmed to learn they have just killed a policeman. The group grabs Tai for ransom. Tai, now abandoned by his own men, goes to police. He also arranges for the group's next heist. Thus when they meet Tai after the "job", police come in helicopters. Tai is killed. They get away but Block Head is seriously wounded. They go to the walled city of Kowloon to find a doctor for Block Head. And they are betrayed by the doctor's wife. Block Head is dying. These bosom friends are splitting on the next move. Some want to go back. Some want to stay. Only Tung realizes there is no place in the world for them. But they keep on shouting and are coming to a shoot-out. Can these Dirty Rats have another chance? Or, are they really doomed to sanguinary failure?

Email ThisBlogThis!Share to TwitterShare to FacebookShare to Pinterest
Labels: HKMS, Long Arm of the Law

The title pretty much sold me on it when you previewed the cover a while back, but your review just solidified it. :)

Thanks rG, hope you didn't read this synopsis first!