An excellent example of the kind of balls out action film making that did so much to bring excited attention to the Hong Kong cinema scene in the early nineties amidst Woomania. Unfortunately Andrew Kam's Fatal Termination is quite hard to see, at least legitimately, and deserves a much wider audience. It may not have the style or sophistication of John Woo's celebrated work but what it lacks in those areas, it more than makes up for in the insanity of it's action sequences. 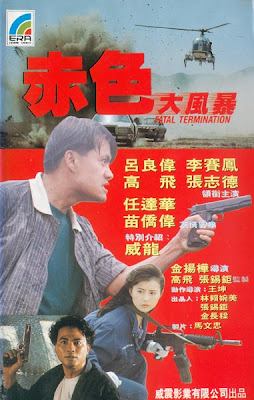 The film has an overly exposition heavy plot, involving two sets of warring terrorists trying to get hold of an arsenal of weapons due to pass through Hong Kong, is further complicated by two sets of investigating cops, a corrupt customs official and a vicious gangster. The first half hour or so is quite slow as the plot and characters are set up, and perhaps could have been trimmed back a little, however once the action gets going, the stuntmen really suffer for our enjoyment. Fatal Termination is a brutal and mean spirited movie and altogether better for it. A catalogue of life endangering stunts are performed for the viewers pleasure, the most infamous one being the little girl dangling from the window of a fast moving car, while Moon Lee on the bonnet, tries to fight two guys through the windscreen to save the girl. No matter how many times you see it, you never can quite believe what you're seeing. The kind of sequence that could (and should) never be made now, and that really shouldn't ever have been filmed, truly gobsmacking! 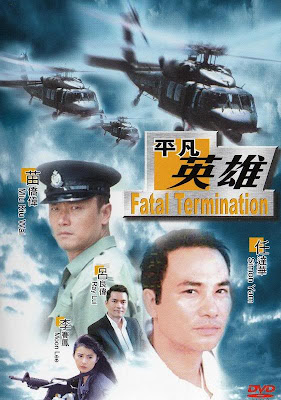 After the slow start the intensity really picks up, until by the finale it's pretty gripping, due mainly to the anything goes nature of the film. It's said of many films but here you really do believe any and all of the characters are fair game to die horribly at any second. Fatal Termination isn't really an actor's film, but Robin Shou as the corrupt customs official is good, Simon Yam is solid as usual without really making that much of an impression and Moon Lee is as good as I've seen her. It's Philip Ko though who steals the show as the ridiculously evil gangster, he seems to be having a real blast.

Fatal Termination is not the gory spectacle that Kam's own The Big Heat is, but does deliver on the action and stunts front in a similar manner to that film's grand guignol approach to gore. Unfortunately difficult to see now, as the VCD and DVD are long OOP, it's well worth the effort of tracking it down, if only to see the kind of Hong Kong action spectacle that just doesn't get made anymore.
Posted by A hero never dies at 4:59 PM

Saw this at the movies in Melbourne three times in one week. I took some specific friends who'd never seen a HK film and they were in shock. In addition to the car stunt, the shooting of the child is pretty hardcore, too. Also: great stunt involving a guy falling onto his hip from a container. I went to ridiculous lengths to get VHS, LD (for a crazy OZ$140), and DVD. Still pull this out when the occasion requires it.

A few amazing moments for sure Phantom. Those unbelievable prices paid to get HK movies on laser, it seemed acceptable at the time but just seems stupid now, vive la hardcore!

Good review, buddy! Will have to check this out. Will be watching The Big Heat soon for the site.

Argh! Nothing more frustrating than wanting to see an awesome action flick and not being able to because it's somehow not readily available. Bummer. Great review though! I'll just have to keep my eyes open for this one and hope it gets a new release somewhere down the line.

Ty, hope you get a kick out of The Big Heat, I'm sure you will.

rG, I'm sure you could probably dl it if you try, with it being oop it's pretty much your only option short of eBay.

Actually FATAL TERMINATION is available on a great looking DVD from Austria. it's letterboxed and uncut, and carries the Cantonese audio. Unfortunately no English subs. I got mine from D&T:

Btw, you mention a VCD and DVD. It's also released on a HK VHS. It's fullscreen but at least it's subbed in English.

Thanks for the info Jack, I may look into picking that up some day, the subtitles are pretty irrelevant in a movie like this!