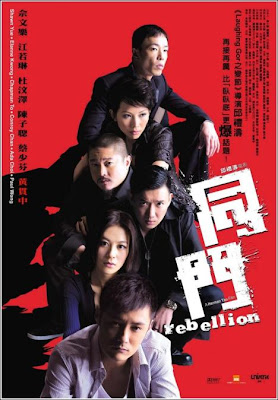 Rebellion, made in 2008, is exactly the kind of Hong Kong film I'm a sucker for, while ever movies like this are being made in the region I will keep watching them. Written and directed by Herman Yau, the movie has many problems but enough of the good stuff to keep me entertained, perhaps this says more about the current scarcity of great Hong Kong movies these days than anything else.

Taking place over the course of one night in Kowloon, Po (Shawn Yue) is the bodyguard for Jimmy (Calvin Poon), a mob boss, who along with a four others observe a long truce, overseen by Mr Tai (Austin Wai). When Jimmy is shot on Po's night off, Po is put in charge of his affairs by Cheung Wah (Ada Choi), Jimmy's wife, much to the disgust of Blackie (Chapman To) Jimmy's second in command. The race is then on for Po with the help of Ah Ling (Elanne Kwong) to find the assassin and more importantly who ordered the hit. Po's problems are increased when Blackie and the other gang bosses begin to manipulate each other, causing friction between the gangs as the delicate equilibrium is threatened, to the point where chaos and an all out gang war seems inevitable. 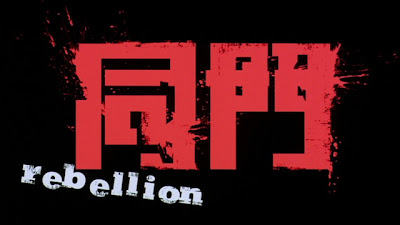 The kind of Triad tale told a million times before, Yau's movie begins unpromisingly with a ponderously dull narration from Elanne Kwong's character, who explains who all the players are. Once the setup is complete the movie picks up considerably and while certainly no classic, it has much to recommend it, not least of which is a seam of unexpected but welcome humour. The slightly off kilter writing style of Herman Yau is supported in this by a wonderfully unusual cast of bit part players and the irrepressible Chapman To. To is hugely fun as the mischievous troublemaker Blackie, bringing a surge of energy to the movie when ever he appears on screen. Even more fun though is Paul Wong as Coffee, one of the other Triad bosses. He plays everything completely dead pan and I found him hilarious. Almost everytime he appears he's introduced having sex in some shape or form and even plays this dead pan. Coffee immediately became one of my favourite film characters, I'd love to see him have his own spin off film. 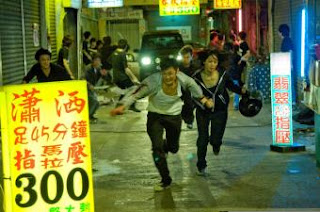 The problems with the movie revolve around the main characters of Po and Ah Ling. It isn't that they're bad, it's more that they don't have much chemistry together and for much of the film a romantic involvement between them is pushed, to reinforce this one of Kwong's syrupy ballads plays in the background of their scenes together, no doubt a condition of her being in the movie to start with, and this element didn't work for me at all. Shawn Yue is one of the better young actors following in the footsteps of the great HK actors such as Chow Yun Fat and the Tony Leung's, and he's fine here but his character is presumably called Po for a reason, as I'm struggling to remember a more po-faced lead character in recent memory, making the humour from the other characters all the more important.Finally, the resolution to the mystery is pretty obvious from the start although maybe not quite in the way you may expect, but nevertheless it's easy to guess the outcome. 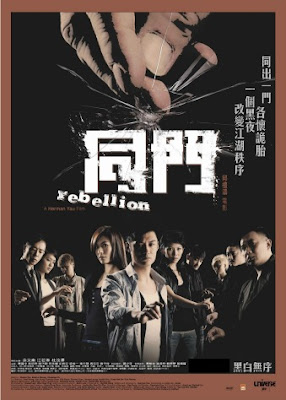 As usual Yau works wonders with a low budget, managing to stage a few nice action sequences including plenty of serious machete action during the Triad chop downs, so beloved of the genre. Choreographed to look suitably and convincingly chaotic. Yau also manages to work a little sly political commentary into the film but don't expect too much depth! Rebellion is category III rated but this is down to the Triad subject matter rather than how graphic the sex and violence are.

While Rebellion doesn't cover any new ground, I really enjoyed it. If you've had enough of Triad flicks then you would be advised to give it a wide berth, but if like myself you lap them up, I'm sure you will find plenty to enjoy here.
Posted by A hero never dies at 6:34 PM