Having To Watch Movies In The Early Morning Was A Drag Until...

I've recently started a new job with significantly different working hours than I'm used to, this has severely impacted on my film viewing. Instead of being able to watch movies after work, I'm having to fit them in early in the morning. In the interests of neighbourly harmony, this means I can't use my home cinema set up at anything like a listenable level. So what to do?

The answer I came up with is headphones. I already had a pair of reasonably good quality cans and while they sounded pretty good, the problem was I don't like to miss out on the pleasures of surround sound, so after a little research, I came across the Sony DP-1000 Digital surround processor. Just plug the digital output of your dvd player into the unit, plug in your headphones and the little gizmo takes the Dolby digital 5.1 or DTS signal straight into your head! 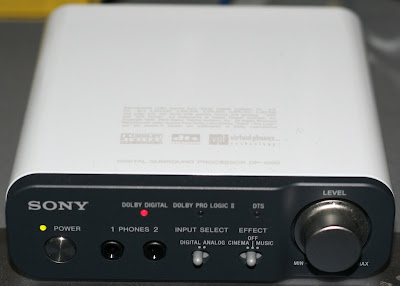 Having experimented with it, it's obviously not the same as a full 5.1 speaker setup, it's just different. For instance while you don't get the same kind of expansive panning effects you do with speakers, what you do get is a great feeling of spatiality. It's hard to describe exactly but think of it as being like 3D audio, where sounds are placed in your head at different depths. For example at the beginning of Johnnnie To's Exiled, during the shootout at Wo's house, when the bubbling stock pot is hit, you can place the pot from the sound of the lid rattling but you can also pick out where the liquid is hitting the floor in front of it. It takes a little getting used to but the effect is a little like the X-Men, uncanny.

I was worried that I would find the headphones too uncomfortable and they would distract me from whatever I'm watching but I've got on famously with them so far. Which is great as now I'm back to experiencing the soundtracks at full dynamic range at anytime of the morning or night, and to have this different kind of surround effect is the icing on the cake.
Posted by A hero never dies at 5:59 PM

Brilliant! I had no idea the things even existed! lol.
Good luck at your new job!

For about the last two years I've been getting the movie watching done from 5 to 7 a.m. It puts you in a little bit of a drag, but you get used to it.

I've not seen this hook up, but I'm impressed. Might have to check it out for myself.

And good luck with the new job.

Good stuff Mart, whatever works really... How's the new job working out, have you settled in easily ?