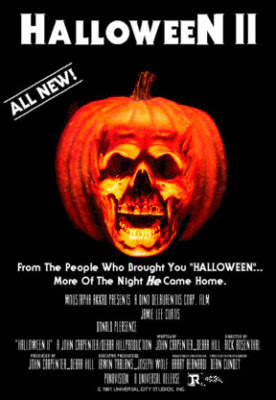 Halloween II, the much maligned sequel to John Carpenter's original has had a pretty rough ride since it's release in 1981. The film had so much to live up to, it was always going to be impossible for lightning to strike twice, however taken as a film in it's own right, it's a solid slasher with a few elements to elevate it above the myriad of similar early 80's rivals.

Halloween II picks up right at the end of the first movie, even replaying Dr. Loomis (Donald Pleasence) shooting Michael Myers, only to find his body missing. Laurie Strode (Jamie Lee Curtis) is taken to hospital as news breaks of the slaughter Myers has inflicted on the town of Haddonfield. While Loomis rants at the local police, Myers continues to slice his way through the town. Hearing on a radio broadcast that Laurie has been taken to hospital, Michael resumes his quest to kill her, but why? 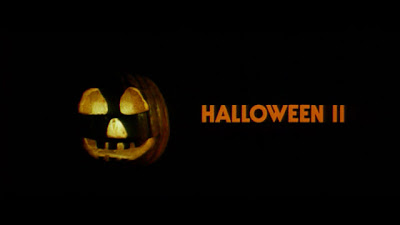 The decision to have Halloween II pick up directly from the events of the first film is both a blessing and a curse. It certainly makes the sequel hit the ground running but it also unfortunately invites the inevitable comparisons with Carpenter's film. Another side effect is how the decision affects Donald Pleasence's performance but more on that later.

Often criticised for having a schizophrenic feel after John Carpenter was called in to do reshoots to up the scare and by this time, fashionable gore levels. He famously said director Rick Rosenthal's original cut of Halloween II "was about as scary as an episode of (the tv show) Quincy". Considering Rosenthal copies Carpenter's directing style as closely as is humanly possible, this seems a little harsh. Rosenthal wanted to make the film in the style of the original, while the producers seemingly wanted a gorier, trashier version.

For me, the best part of the film is the beginning, with Myers lurking in the shadows of Haddonfield before invading the domesticity of it's residents with his kitchen knife, this section has a feel of eeriness as well as terror, watching Michael staring into the homes of potential victims had the hairs on the back of my neck standing up. This section also adds to the schizophrenic feeling as it takes longer than I remembered to get to the hospital. Once we arrive there, as great a setting as it is, the scares somehow become less potent, despite the vulnerability of Laurie, injured and woozy thanks to a sedative. 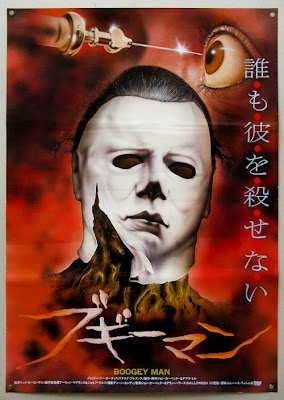 The elements that combined so wonderfully in the original still work very well, Dean Cundey's cinematography is striking, especially when he breaks out the colour filters. Even more integral to the success of the film is the score, with the classic Halloween theme rearranged by Carpenter and Howarth into something familiar but strangely fresh at the same time. Jamie Lee Curtis is fine, but by this stage of her career she could have done the role in her sleep. The most entertaining thing in Halloween II though is Donald Pleasence's Dr. Loomis, it's a performance and a half! As I said before, because the film continues from the end of the first film, Dr Loomis is already at fever pitch and has no option but to start from turned up to 10, the only way he can go then is up to 11 and this he does to genuinely amusing effect. Ranting away at all and sundry, often while waving a gun in the cops faces, it does make you wonder who is the more dangerous lunatic! While it does little to enhance the atmosphere of the film, it's terrifically entertaining and eccentric to the point that I really didn't care, but from a critical perspective I can see why reviewers may not have been able to take it as seriously as the filmmakers would have liked. So while nowhere near the perfection of Carpenter's film, I really liked Halloween II, it has plenty to offer fans of both the series and slasher movies in general, of course you could argue it could and perhaps should have been better than that, but it is what it is. I hadn't seen the film since the mid 80's on a pan and scan VHS, so the recently released US blu ray is something of a revelation. The video appears to be untampered with, so a nice level of grain is present along with the fine detail that comes with that. Just one scene looked poor, this was probably taken from a different source as the difference is so obvious. As far as the audio is concerned, DTS 5.1 and stereo options are available, unfortunately both are lossy. While not the most dynamic soundtracks around, the score does sound fantastic. The extras include an alternate ending and deleted scenes, and in a really fun addition, the 80's horror clips and trailers fest Terror in the aisles, presented by Donald Pleasence and Nancy Allen. 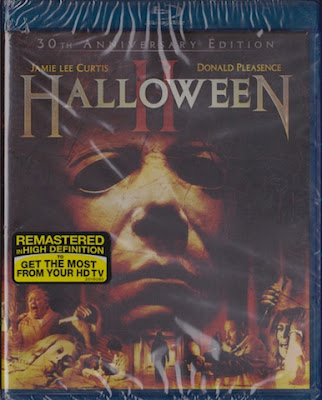 You know, I haven't seen this, like you, since it first hit VHS way back in the day. I've been wanting to lately though as it is one of those films that has everyone divided right down the middle. Isn't there even a "producer's cut" out there somewhere? I know I've seen that somewhere online. I'll have to check this one out soon after I'm done going through the Jason's and Freddy's. lol. Great review as always man!

Brilliant review Mart, I'm gonna watch my old Universal DVD at the w/end now. I stand by everything you say in the review, the early section of the film with those steadicam 'scope shots prowling around the back alleys of Haddonfield is genuinely great Cinema, so it's a pity the film winds up in such routine territory. Really the series should have ended here - I just don't see it having much more milage - incredible to think it spawned so many sequels (not counting the stand-alone Season of the Witch which is a fantastic film)...

rG. Thanks, how are your memories of it? Do you remember liking it or not? I hardly remembered anything of the opening half hour or so, which as I said is the best part of the film.

Wes. Great to have you back! I've only seen Halloween III the once and hated it, this was back in my long distant teens though, so I was probably just disappointed it wasn't the same Halloween formula. I must revisit it asap, seeing it featured on so many blogs recently had piqued my interest and your whole hearted recommendation seals the deal.

Great review Martin. I remember that Rick Rosenthal got really slagged off when Halloween 2 came out. Everyone blamed him for the added gore. Seems very unfair now we know he tried to saty true to the style of the original. Didn't he direct another one later in the series?

Thanks Jon, yeah, I think he did a really good job considering. You're right he did Halloween Resurrection, which I don't think I've seen, how about you?

Nah, I haven't bothered with any of them after 3. I watched 'Going to pieces' documentary on the slasher film last night - surprised that Halloween 2 wasn't mentioned considering it came out amid the slasher cycle.
Have you seen Rosemary's Killer? I quite liked the look of it.

Just like you, I don't remember anything other than the opening sequence. So I will have to definitely check this out again soon. I'll also have to look into this "producer's cut". I know I've seen it and I wonder if it's any better than the theatrical cut. I'm not gonna get too excited though, it might just be some kind of workprint or something.

Great review! I don't recommend anything after part 4, and H2 and Resurrection are like night and day in terms of quality. This one, I've watched a good twenty times, usually back to back with the first film. I don't like it as much as Carp's original, but it is entertaining. I mostly consider it a more drunken version of the first film that lives more off of a body count than suspense. I gotta agree with Wes, though, Halloween III is pretty incredible.