I revisited Fright Night Part II during the Halloween weekend for the first time since seeing it theatrically in 1989. Tom Holland's original Fright Night is a movie I have a great deal of affection for, a great mix of humour, horror and nostalgia, a notoriously difficult combination to perfect. Tommy Lee Wallace's sequel made in 1988 tries hard to repeat the magic but ultimately falls well short.

Three years on from the events of Fright Night and Charley Brewster (William Ragsdale), thanks to his therapy, believes that Jerry Dandrige was a serial killer rather than a vampire, as vampires don't exist right? With new girlfriend Alex (Traci Lind), Charley is trying to move on, until that is, while visiting Peter Vincent (Roddy McDowall), he sees four coffins being taken into Peter's building, along with four strange people, led by a woman he seems to have a strong connection with. It can't be happening again, can it? 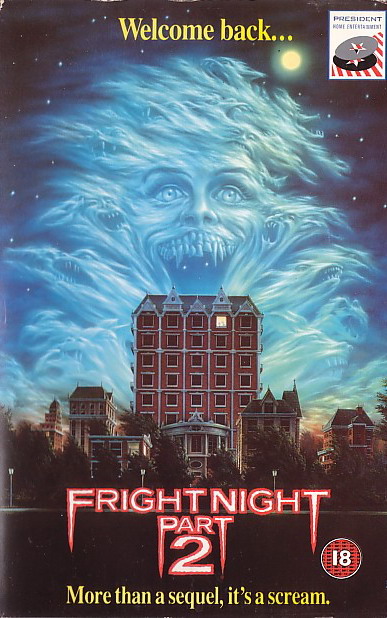 The strength of the screenplay was one of Fright Night's strong points, so immediately the sequel is set back as the writing in Fright Night Part II is weak. The whole film feels like a disjointed mess of scenes and ideas rather than a strong narrative. This is of course, a common problem in horror sequels and particularly in 1980's ones, but it really stands out here. Without a strong story the film is relying on it's other elements to pull it through and unfortunately they don't quite manage it. Chris Sarandon's vampire was so good in the first film, charismatic and charming, it was easy to see how he managed to do his thing. In the sequel the head vampire, Regine, is played by Julie Carmen. She does a pretty good job but suffers in comparison, her best moments being her dance pieces, which are well staged and quite atmospheric in a horror film otherwise devoid of atmosphere. Presumably the filmmakers weren't convinced she was enough to carry the film, hence her entourage, who do provide some much needed fun, Brian Thompson of Cobra fame and John Gries in particular have their moments, but only really serve to make the film feel even more fragmented. 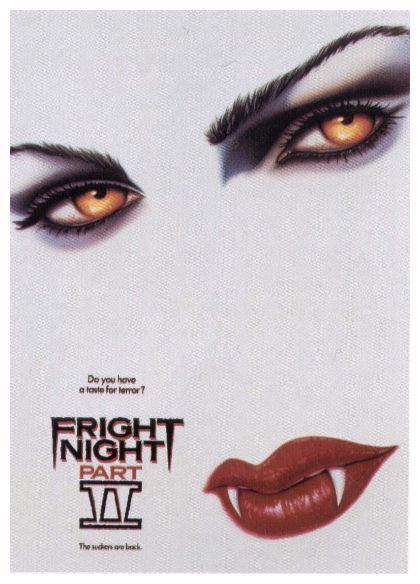 Fright Night Part II isn't all bad, the chemistry between William Ragsdale and Roddy McDowall is still good, although nowhere near enough is made of this, which would have undoubtedly helped the movie. The practical special and makeup effects are fun, and while maybe budget restricted, I'll take them over todays obsession with CGI.

My biggest problem with the film though is the complete lack of scares and the aforementioned failure to build any sustained atmosphere. As Tommy Lee Wallace was a protege of John Carpenter, this is really disappointing. I didn't like the film much upon seeing it in 1989, but thought time may have been kinder to it, revisiting it now I feel exactly the same way about it as I did then, which in a way, is comment enough on the film.

For a much more positive viewpoint on Fright Night Part II, check out robotGEEK's review here, while you're there, have a good look around at the wealth of cool stuff he covers.
Posted by A hero never dies at 6:05 PM

Thanks for the mention man! You rule! It's funny how our experiences are so different on this one. lol. To think that we were both watching the same film on the same night at different parts of the world. Crazy!

I recently revisited this one, too, Martin. I made a DVD-R of it as it's been on the satellite here and there lately. My opinion hasn't changed seeing it again some two decades later. Essentially the same story all over again, it attempts to supplement its retread status by introducing a flurry of new characters. The movie just has this cold feeling about it. The unfunny comedy moments do nothing for me and one or two of those seemed so damn unnecessary. I did like Thompson's bug eating Renfield character and the lead vampiress was a good opponent, but overall I could have done without this particular sequel.

Great review, buddy. I reviewed this one a few months ago, and we share almost mirrored feelings for it. Back when I was a kid, I nabbed it off Pay Per View and thought it was great. Nostalgia bit me in the ass this time. You're right, it isn't all bad, but it definitely fails at recapturing the magic. Which is sad, because I dig Wallace.

Regina was definitely no Jerry, and for sure that dance scene is a highlighting moment. Gries and Thompson are show stealers.

I really hated Charlie's new girlfriend, I felt like that addition hurt the story badly. At least give some sort of reason as to why. That shit straight pissed me off.

It also seemed like they were going for a more darker tone this time around, and it just didn't work for me. Sure there's comedy, but unlike the first film, most of it isn't funny.

rG. It does seem unusual how we differ so much on this when we usually agree on most things, and yes, that idea used to fascinate me as a child, wondering how many other people around the world were doing the exact same thing as me at the same time.

venoms5. Hey Brian, yeah it just lacked whatever it was that made the first one so enjoyable, both in terms of the filmmaking and the feel of it.

This isn't The Death Rattle you know!

Eric. Thanks. The girlfriend is hopeless and shows how poor the writing of the movie is, how stupid to get involved with the Gries character, other than to serve the story. Fright Night 2 wasn't the first and won't be the last to do this but it really stood out here.