What could yours truly ever have to thank Megan Fox for? Read on and I'll tell you. 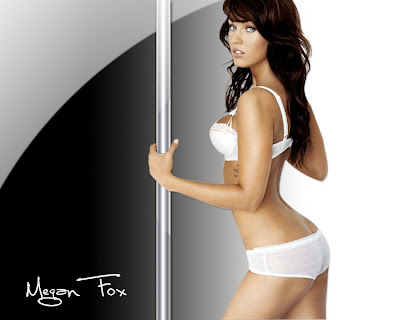 I've been struggling lately with this whole blogging lark, if I were a writer I guess you could call it writers block, since I'm not, let's just call it block. I've had a few problems lately, which I don't feel the need to burden you with but let's just say my mind has been clouded and I've really struggled with being able to focus on anything at all, never mind writing. These last few days we've made a breakthrough and made a few huge decisions about our future, leaving me scared and excited for said future, and this my friends is at least partly down to the lovely Megan.

Megan Fox, Hollywood hottie bar none to some, loud mouthed, obnoxious talentless trollop to others, she seriously polarises opinion. To me, she will now forever be the girl who cured me of my O.C.D. of buying dvds and blu rays. How? 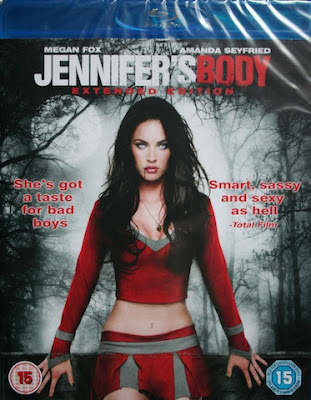 Jennifer's body, the cure! I saw this pop up on HotUKdeals.com, available from Amazon for £3.97. Most people would have just ignored it, but not me, before I knew it it was in my cart and ordered. I couldn't help myself, it was cheap.
Don't get me wrong, I quite liked Jennifer's body, the movie took a lot of uncalled for flak in my opinion, it's pretty entertaining in a switch your brain off kind of way, but and this was the big question I asked myself afterwards, does anyone actually really need to own Jennifer's body? And on blu ray no less.

I tried to cancel the order but it was too late, and the blu ray arrived yesterday. As if to mock me further for my choices, the disc came in a suitably vacuous slipcover featuring Jennifer's moulded, pneumatic body sticking out at me. 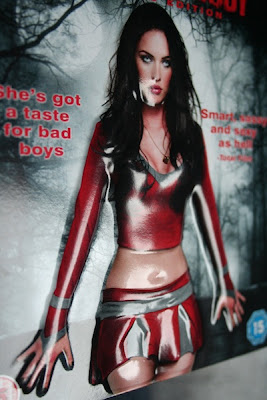 Not only that but the distributor tried to sell the movie with this on the cover, not that the movie is better on blu ray but that Megan Fox is.

As a result, after this months recent buys posts, they will become a thing of the past. I have enough unwatched films to last me a lifetime and a lovefilm subscription to go with them. I like buying movies, but I feel like I've been buying too many Jennifer's bodies, and it's time to stop. I guess the failure to cancel the order was a good thing, in that now I have Megan's bumps to hang on to and remind me should I waver at all. So, thanks to Megan Fox for helping me regain my focus and come to my senses, and for that I'll even forgive you Transformers 2.
Posted by A hero never dies at 3:51 PM

Awesome. I must say I'm not too big on Megan Fox, I surprisingly don't even find her hot. She's certainly not ugly, just not my type of lady, I guess. But I will agree about Jennifer's Body; thought that was a great movie hated more than I really think it should have been. But hey, everybody feels differently. It kinda reminded me of a demonic Ginger Snaps, though, not as good.

I used to be out of control buying DVDs, too. Still have well over 100 films I haven't watched. :/

Thanks Eric, Yeah I think people just decided to hate her for the sake of it, and because all the marketing was about her the movie tanked, it's no masterpiece but I thought it was fun enough. As for Miss Fox, I can take or leave her really, I rarely read or believe the crap you see about celebrities in the press.

I never thought she was a bad actress, in fact when given the right material I think she's decent. And I think she's hot, in a skinny kinda way if you're into that, which I'm not really. But I think it has to do with her big mouth. lol. If she didn't constantly voice her unintelligible opinion then she wouldn't get so much crap.

Recently I also had a personal revelation, which is why I think it's funny that you posted this. I've always been a collector of "whatever". I guess I feel like it's a good hobby and it keeps me busy and out of trouble. But with whatever new hobby I get into I get obsessive whether it be comics, toys, dvd's or whatever. Lately it's now old hard to find and OOP VHS and I finally realized I may have a slight O.C.D. and I even asked my buddy and he didn't even hesitate before answering "YES!". lol. I get into something new and I usually go overboard and I'm a guy with 2 jobs and a family and just realized the other day that I'm spending way too much money on this stuff when it should be going to bills and stuff. So I also decided the other day to drastically slow down my collecting. I love having a hobby, but I can't go broke just so I can have a hobby. lol.

She must have really helped you out if you can forgive Transformers 2.

You made a smart purchase and that embossed slipcover proves it. Do not doubt yourself!

If anyone doesn't think she's hot, I suggest they check out the Two and a Half Men episode that she was in. Wo, hubba-hubba!

Yeah, I never buy any DVDs or Blus that will show up on TV. In the UK and Ireland we have a bunch of satellite channels and free movie channels so between them I could easily catch say No Country for Old Men at least once a forthnight, so this is a film I'll never own...

The film I'll never own is School of Rock, which seems to be on E4 every other night. The trouble is I keep watching it!

I quite enjoyed Jennifer's Body, although I can't remember anything about it which I suppose is not a good sign.

I often browse the bargain bins seeing blu-rays that I question why it's on blu. My ultimate is seeing Ladybugs on blu-ray and really wondering: "who really was begging for this one?"

I am not cured however. I just bought Daughters of Darkness from Blue Underground as it was half off in a bargain bin sight unseen. Oh dear...

rG, Yeah, I suppose she doesn't do herself any favours sometimes, but what can you do?

Completely agree, and I don't have any kids! I have quite an addictive personality, when I start something it's never enough to play at it, which can be really expensive! I realised there are more important things to spend cash on than Jennifer's body!

Rich, She has, I'm not saying I'm ever seeing it again though, I'm not stupid!

Drunketh, I'm not convinced dude. I'm also quite O.C.D about the covers and those bumps don't sit well on the shelf!

Dr. Stan, I don't watch that show, I'll see if I can find it on youtube.

Wes, That is exactly where I need to be, I have Sky movies and hardly ever watch anything on it. Maybe I am stupid!

What I like about buying movies is being able to pick anything off the shelf I feel like at the time, maybe when everything is available on demand it will be easier for me.

And yes I have No country on blu ray!

Jon, and that is exactly the point, I have bought far too many discs where "it was a good idea at the time" that really weren't.

I like School of rock too, but the ultimate film for me in this post's sub genre is Shaun of the dead, it seems to be on at least once a day on something, yet I always watch at least part of it if I see it on, and yes I have it on dvd and hd-dvd.

A. I blame the bargains for making it harder, it's not my fault for being weak at all! Nice pick up by the way.