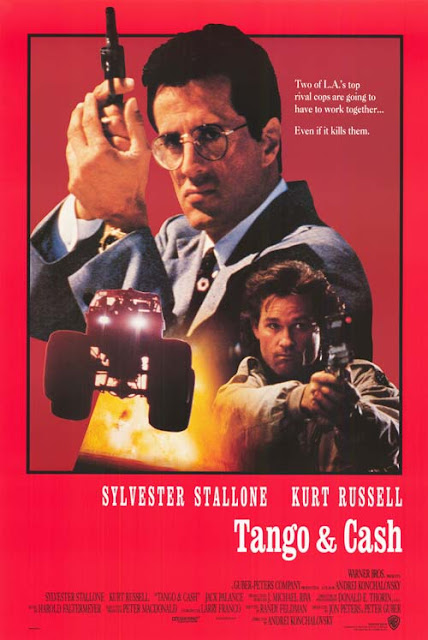 I have a confession to make, I'm a terrible action film fan. Not only had I never seen Tango and Cash before but I'd tried to watch it and given up after five minutes, despite being a huge fan of Kurt Russell. Criminal I know, I should have been arrested by Ray and Gabe and thrown in a cell to do time with Robert Z'Dar! I've now seen the error of my ways and picked up the recently released blu ray and having watched the movie, it's a riot of fun.

Of all the big budget 80's action movies, this has to be the most stupidly fun and cheesy one of all. A mismatched buddy cop film in the tradition of Lethal Weapon, Sylvester Stallone plays Ray Tango, the sharp dressing, indestructible, stock market playing, self proclaimed number one cop in LA. Kurt Russell plays Gabriel Cash, the disheveled, indestructible, maverick, self proclaimed number one cop in LA, can you tell where this is going? 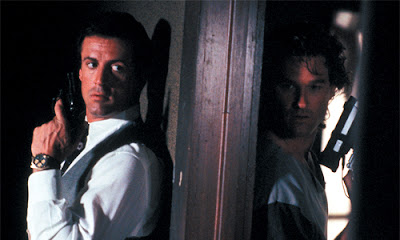 In a truly ridiculously contrived series of events, Yves Perret (Jack Palance) L.A's big bad, deals with the menace of Tango and Cash by framing them, so they end up in prison rather than killing them outright. He manages this with the help of his team of bad guys including James Hong, Marc Alaimo and the awesome Brion James, not to mention a hell of a lot of cash to buy seemingly every other cop and prison guard in L.A. Clearly you wouldn't expect the two number one cops in L.A. to just take this, so they put aside their differences and plan a prison break to prove their innocence and restore balance to the universe. 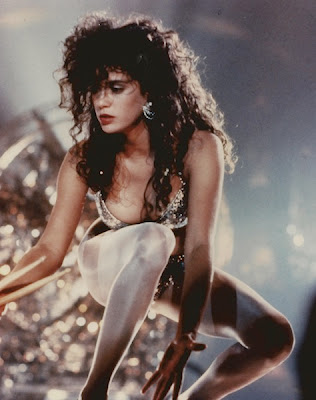 Throw into the mix Maniac Cop himself, Robert Z'Dar, Teri Hatcher as Tango's sister and Cash's love interest, Michael J.Pollard as a Q like inventor for the L.A police and even Mr Blue, Eddie Bunker. A cast list you would be hard pushed to top for this or any other kind of movie.

Directed by Andrey Konchalovsky of Runaway Train fame, Tango and Cash is a strange beast to say the least. I can't say that I'm familiar with the rest of the directors work but I would take a shot in the dark and say that he hasn't made anything else quite like this one. Written by Randy Feldman, with the kind of dialogue that only existed in the 80's (take that as a positive and a negative) and scored horribly by Harold Faltermeyer of Axel F fame. The film has some impressively staged action sequences back from the days when everything was done practically, leading to a few hilariously obvious stunt stand in moments.

What makes the film so much fun though are the two leads, with Stallone playing against type as the more straight laced character and Russell playing basically Russell, not that that's ever a bad thing! The chemistry between the two is superb and while Stallone occasionally struggles to keep up in the banter scenes, overall he does a great job. Palance is fun but the stand out part in the whole movie is Brion James, someone involved decided he would make for a great English villain, complete with an arsenal of English harsh language and the most hilarious accent with which to deliver it. 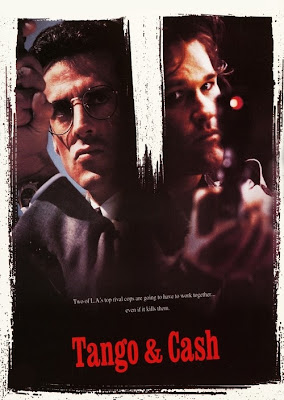 Have you ever wanted to see an uncomfortably long nude shower scene between Stallone and Russell? If the answer is yes, then this is the film for you. Have you ever wanted to see Russell in drag, not just any old drag but fishnets and heels type drag? Well again this is the film for you. These are just two of the reasons to see Tango and Cash (or not if you're of a sensitive disposition!) and there are many more. The UK blu ray is uncut and looks very good for an older title, and it's available for around £5. I really wasn't sure if I'd enjoy it but ended up having a total blast with it, and it's a film I will undoubtedly revisit in the future.

Great selection Mart, I must see this again after your review, not having seen it in years... other big beefy action films I'm thinking of - Commando...Raw Deal... one of your favourites, Last Boy Scout, Die Hard and Lethal Weapon of course, Stallone's prison movie, Lock-Up. I always had a big thing for Missing In Action and Invasion USA - both great. A little classier - Ridley Scott's Black Rain is a favourite too. I must pick up Optimum's DVD of Revenge of the Ninja, heard the disc is very good and is finally BBFC-passed uncut.

I've never been that keen on Black Rain, I wanted to like it, and I've tried but it did nothing for me. Love Invasion USA and all the others you mention, although I don't remember that much about Raw Deal for some reason. Last boy scout still remains my favourite I think, but T&C is as much fun in different ways.

Finally! Someone else who loves this as much as I do. I reviewed this one a few months back myself and it still remains one of my favorite 80's cop/buddy action films. The Last Boy Scout is probably my favorite though, but that didn't come out till '91 though, so I guess that doesn't count. But as an example of 80's excess in the action film genre, this is a good example. This film is so ridiculous and over the top, but that's what makes it so great. They do it all with a straight face and that's why I think it worked. The downside of the score is that you can't get that silly theme song out of your head for days. lol.
Glad you liked it bro, and glad I'm not the only one. lol. Great review!

Great review! Will have to watch Tango & Cash again one of these days. Haven't seen it in years!

rG, it's an odd one, it all feels really excessive but because it's all done practically it doesn't seem quite so big as the crappy excuses for action movies these days. That's the other thing it's played straight in many ways but at others they're practically winking at the camera. Any which way it's a shit ton of fun, and from what I've read vastly underrated as such. Thanks dude!

Ty, Cheers, you should review it, although it had a bigger budget than the stuff you usually cover it would be great to read.