Jeff Lau's Mortuary Blues is a prime example of the anything goes nature of Hong Cinema's golden age. Made in 1990, with it's crazy mix of comedy, horror and adventure, Lau proves again he's a dab hand at films of this nature, having made numerous similar movies before including Haunted Cop Shop and it's sequel. 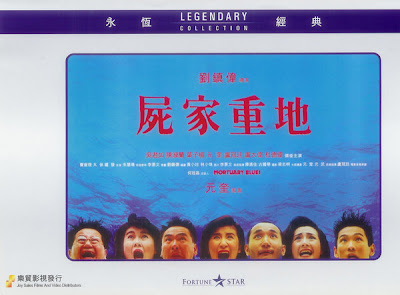 The thin excuse for a plot is largely irrelevant here, the ingredients being ghosts, a treasure map, a police investigation, a Peking opera troupe and a pagoda. Put all this into an industrial strength blender and blitz for an hour and a half or so. Indeed such is the frenetic energy of the movie, you'll probably feel like you've been thrown in too come the end.
So what does the film offer? If you're familiar with Jeff Lau's work, more of the same is the answer, occasionally funny but seriously low brow humour, which to be honest can be quite tiresome, the insane energy level I mentioned which certainly helps when the humour sags and some fast and funny action from Corey Yuen. 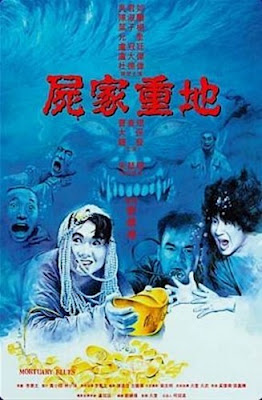 As well as handling the movie's action scenes, Cory Yuen also stars in the film as a cop, other members of the cast include Lowell Lo, Amy Yip and Charlie Cho. Mortuary Blues isn't really an actors film, so it's difficult to talk performances but I must mention Sandra Ng, who puts in one of her ugly duckling performances and manages to out mug even herself in this film. She must be one of the most improved actresses in world cinema, it seems impossible to believe this is the same actress who was so great in Juliet in Love.

The standout scene is when the characters enter the pagoda where the ghosts are leading to a stop start slapstick chase that this kind of HK film does so well. Lau riffs on his own work from Haunted Cop Shop II, rather than female ghosts being subdued by grabbing their breasts as in that film, here it's by grabbing their ass, leading to the fantastic subtitle "Is she an ass ghost?". That isn't the only great subtitle either, there are quite a few in a scene where two characters play dead, with one laid on top of the other, including "Why are you erecting then?"
The finale has an amusing Scooby Doo like feel as the characters dress up in order to fool the head ghost, it may sound stupid and I suppose it is but it fits this film perfectly. 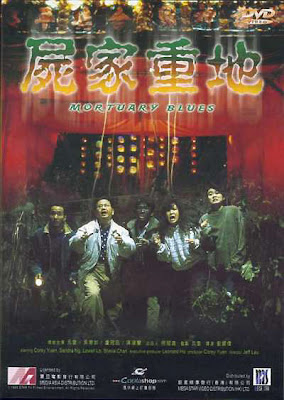 If you're a non believer as far as Jeff Lau is concerned, you certainly won't find anything to change your mind here, trust me. If you're a fan, you'll know exactly what to expect and should find enough to keep you entertained throughout the movie's running time, even though it's nowhere near his best work. If on the other hand you like the genre and you're a Lau virgin, give it a go, you may just like it.
Posted by A hero never dies at 3:14 PM

Is this coming off the tail-end of the vampire flick craze of the late 80's and early 90's? Hey, how come there is no Lam Ching-ying*? (*sadly deceased now-died tragically young from liver cancer at 44)

Whenever there is a Chinese vampire movie from the late 80's to early 90's, you know you will see Lam starring in it. :)

Anon, he's terribly missed by all HK film fans, he did become quite typecast after Mr Vampire didn't he.