1991's The Last Blood is quintessential Wong Jing, an enjoyable but completely forgettable mix of exploitation, balls to the wall action and crappy comedy. Andy Lau stars in one of his many "Rascal" parts from the period, alongside Alan Tam and an incredibly annoying Eric Tsang as the not very comic, comic relief. 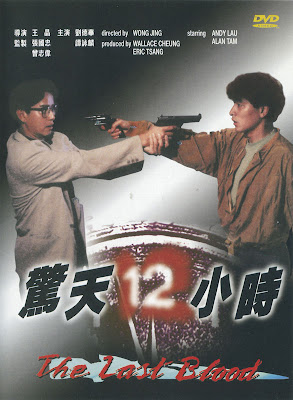 When Japanese terrorist group The Red Army plan to kill the Daka Lama, Interpol agent Alan Tam is assigned to protect him. Unable to prevent the terrorists attack, Lui Tai is left with a serious problem, the Lama is seriously wounded along with innocent bystanders caught up in the attack. One of them is the girlfriend of Andy Lau's Triad, both her and the Lama require blood, and wouldn't you know it, they are both the same exceptionally rare blood type. The Red Army go after the three potential donors, and quickly assassinate two of them, leaving only Fatty (Eric Tsang) able to donate the rare blood. With the Red Army quickly on his tail, it's up to Alan Tam and Andy Lau to work together to keep all three alive. 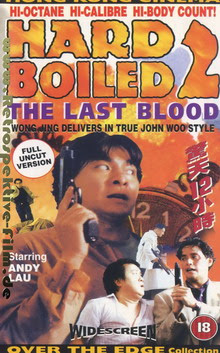 An excellent concept, and thanks to some muscular action sequences, one that's pretty successful. The lame comedy is a major drawback however and almost ruins the entire film, it isn't so much it shouldn't be there, more that it's just not remotely funny and kills the otherwise frantic pacing. What the movie does well is to leave you unsure as to who is going to survive as the violence is aimed at pretty much anyone and everyone, leaving a feeling that no one is off limits. It's also quite bloody, a highlight being a superbly splattery suicide via an uzi in the mouth! 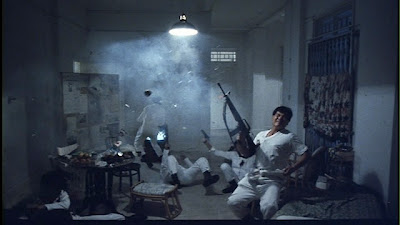 A competent cast do what's required of them, Andy Lau is basically the same as he is in most of his movies from this period, I suppose the thinking being if it ain't broke... By far the most fun is had by Chin Ho as the main bad guy, he really chews it up, spits it out and then has another chew, just to make sure he chewed it up enough first time! The true star of the show though is Blacky Ko who handled the action design. The amount of carnage he achieves on a low budget is very impressive and is undoubtedly what makes the film worthwhile. 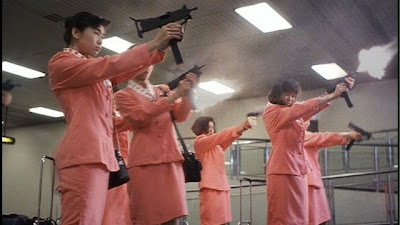 Many UK fans were disappointed by this movie when, in a move that Wong Jing himself would have been proud of, Eastern Heroes released this film on VHS as Hard Boiled 2 at the height of Woo mania. Unfortunately this took away from a pretty solid action film, that probably would have been received in a much better light without the deception.

Made during the golden days of Hong Kong cinema, revisiting The Last Blood for the first time in probably fifteen years made me long to have those days back again. Days where excitement and anticipation surrounded seeing any new Hong Kong movie. Yes, plenty of rubbish was produced but so many great films were released it didn't matter, when you saw a dud, the next one was sure to be good, if not then the next one and so on. Compared to the scraps we HK cinema fans feed on these days, the Last Blood probably feels more special than it actually is,  but you could however, do so much worse than give it another spin to relive the glory days.
Posted by A hero never dies at 7:57 PM

Never heard of it, but I'd love to see this one day. I'll have to see if I can get my hands on it.
So they really tried to market it as Hard Boiled 2? Without Woo or Fat?
Great review man. :)

Yes, the Good Old Days, even though thius was not particularly good.

I do rememeber one three week period where I saw Burning Ambition paired with Tiger Cage, The Killer, Casino Raiders, and In the Line of Dirty III for the first time. It was heaven.

rG. Yep they really did try that and to an extent it worked. It's a fun movie but don't break your neck trying to see it.

Phantom. That was a cracking three week run. As for The Last Blood, I've got a soft spot for it despite it's flaws.

I love THE LAST BLOOD and especially enjoy watching ultra conservative Singapore getting blown to smithereens.

I love this one too and makes a great triple bill, sandwiched between 'Game Boy Kids' and 'Scared Stiff'...

Never did see Game Boy Kids Dan, come to think of it I haven't seen Scared Stiff yet either although I do have that one.

'Game Boy Kids' is amazing, but not always for the right reasons. It is incredibly lame at times but, at others, it is so insanely creative with its stupidity that it is a curio worth taking in at least once.

'Scared Stiff', on the other hand is a film that mixes genres and tones so liberally, that it is almost impossible to guess where the narrative arc is heading until the film is almost over and then, somehow, it all slots in to place. it's got a couple of really funny gags in it and some less funny, but equally craptastic ones too.

Imagine Bey Logan doing an audio commentary in light of ripping off this movie for some Michael Biehn star vehicle.