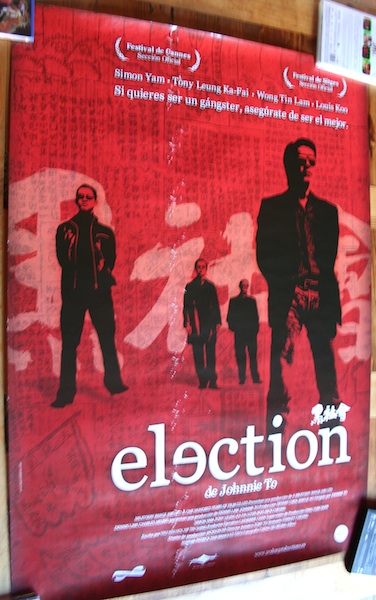 Spanish poster for Johnnie To's Election. To's movie was the first film I saw in a Hong Kong cinema upon it's release in 2005, I had wanted to see a local film on my previous two visits but due to poor timing nothing was actually worth seeing during my stays. I can't remember what the choices were in 1998 but on my second trip in 2004, with HK film in a terrible state, the only choice was The Twins in Protege de la Rose Noire, nuff said!

The experience of seeing Election at the Broadway Cinematheque in Yau Ma Tei was amazing, from the first few notes of the score to the end of the movie, it's something I'll never forget. I had been warned of the freezing air conditioning in Hong Kong cinemas but I was still taken aback by just how fridge like it was in there.

I've never managed to get hold of the HK poster for the film, but managed to pick up this Spanish version on ebay, unfortunately the seller didn't use a strong enough tube and the result was the damage you can see in the picture. It's cool anyway though, and my crappy photography skills don't really do it justice (this was the best of six attempts!).
Posted by A hero never dies at 3:06 PM