A Colt Is My Passport Review 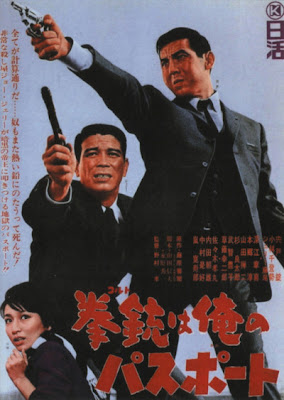 A 1967 film from the Japanese Nikkatsu studio, A Colt is my passport is a brilliant piece of genre blending cinema. Directed by Takashi Nomura and starring Jo Shishido (perhaps best known in the west for Seijun Suzuki's amazing Branded to kill) the film is shot through with European influences but remains a truly Japanese creation.

Boiled down to it's essence, Jo Shishido is a stoic and slightly maverick hitman who along with his young partner (Jerry Fujio) takes on the job of killing a mob boss. After the hit everything becomes complicated as shifting allegiances within the underworld contrive to make their escape increasingly difficult.

That's the story in a nutshell, more characters are introduced but like most good genre movies it's kept tight and pretty simple. What elevates A Colt is my passport to excellence is the craft of the filmmaking and those influences I mentioned. Despite colour having been available in Japan for years when the film was shot, Nomura went with high contrast monochrome and this was a perfect choice for this film, it looks fantastic. The 2.35:1 framing of the movie gives the action a much grander feel than the obviously low budget would suggest possible, with inventive shot composition and excellent use of unusual angles all adding to the aesthetic. Given how much the Euro western "borrowed" from the Japanese Chanbara genre, it's pleasing to see the favour returned here. The film has a European vibe to it, with the ending feeling particularly Leonesque. The score for the film is basically a spaghetti western one, with a few jazzy elements thrown in here and there. The European influence doesn't just end with westerns, Jean Pierre Melville's wonderful gangster films seem to have also had an influence in A Colt is my passport. While Melville's main influences were the Hollywood gangster movies he loved so much, his film's were also hugely influenced by the Samurai code. It's great to see the Japanese film makers reflecting back their own cinematic conventions with a European perspective.

For all it's myriad of influences, A Colt is my passport remains a thoroughly Japanese film. Utilising excellent locations and a great cast led by the chipmunk faced Shishido, with excellent work from Chitose Kobayashi in particular. Nomura's film is a great example of the pulp genre. It's great fun from start to finish and has a fantastic opening and a truly superb ending, one so good it made me want to watch the film again immediately. 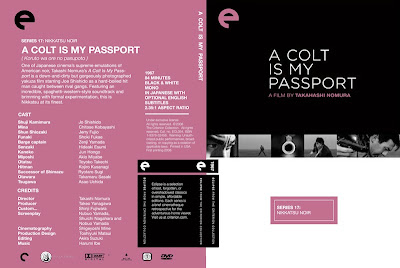 Email ThisBlogThis!Share to TwitterShare to FacebookShare to Pinterest
Labels: A Colt is my passport, Jo Shishido, Nikkatsu, Takashi Nomura

cool, I'm gonna try and catch this at the Nikkatsu retrospective this week as well as Tokyo Drifters.

Stellar review Mart, I must see this one, it sounds brilliant. I never picked up that Nikkatsu box because it was always beyond my meager pennies but a friend has it so I might get it off him. I love the title of this one. The English title of Fukusaku's 1968 gangster pic Blackmail Is My Life is a great one too...

mr c. I'd love to be able to go to the retrospective, it's a shame more of these movies aren't readily available. Tokyo Drifter should be awesome in a theatre,

Thanks Wes, it's a great movie, get it by any means you can, I'm sure you won't regret it. Speaking of pricey, I can't wait to get my hands on the Criterion Blu ray of Branded to kill.

Glad you dug it. How do the other films in the Eclipse set compare to A Colt is my Passport? or even things liked Branded to Kill?

A. Nothing compares to Branded to kill!

This is the first one I've seen from the box set, I don't actually have it I borrowed this from a friend, it's made me eager to see the others, although I think this one is said to be the best of the set.

Not a bad film in the Nikkatsu box set... this is excellent, of course. Nice review.

Thanks Phantom, good to know the rest of the box is worthwhile too, will definitely pick it up before it goes out of print.