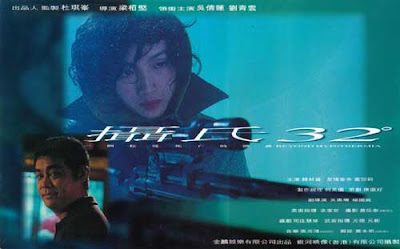 Beyond Hypothermia was the first production from Milkyway Image, produced by Johnnie To and directed by John Woo protege Patrick Leung. The film stars Wu Chien Lien and Lau Ching Wan and riffs on Luc Besson's Nikita along with a wide range of HK action thrillers, not surprisingly including John Woo's The Killer. While the action in the film is up to par and in certain scenes truly exhilarating, the same cannot be said for the dramatic aspects of the story.

Wu Chien lien plays an assassin, whose body temperature is 5 degrees below normal, for no discernible reason, other than the purely symbolic and to give the film a title. She has been raised as a killer by her aunt and handler (Shirley Wong), way to parent Shirley! Deprived of any kind of childhood and disconnected from a real life, our assassin longs for a little human feeling. Enter Lau Ching Wan as a local friendly noodle stall holder. An awkward relationship is formed as after each hit job she visits Lau for noodles. All is well until she takes out a powerful Korean mob boss, and in response his disgraced, faithful bodyguard (Han Sang Woo) vows vengeance! 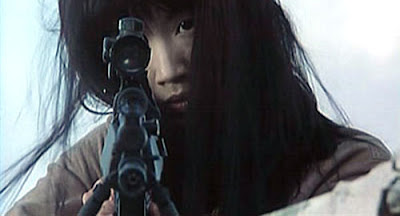 Before the recent spate of mainland targeted Hong Kong movies, it was common to see HK films targeted at other Asian territories, usually by having a huge star from whichever pan-asian country and having part of the film shot there. Beyond Hypothermia follows this formula and has a pronounced Korean presence, with Han Sang Woo amongst others featured in the cast and some of the film shot in South Korea. This gives the film a significantly different feel to the many other similar Hong Kong films, and gives it a chance to shine. Which it does to some extent, though not entirely. 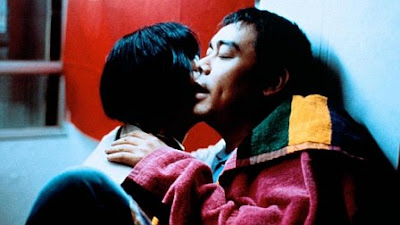 Wu Chien Lien is excellent here, as unlikely as she may seem as a literally cold blooded killer, she sells the idea, bringing a childlike innocence to her scenes with Lau Ching Wan but also the steel necessary for for handling the heavy duty weaponry and action scenes. Perhaps the standout (non action) scene in the film is where, having never been allowed to have photos, she joyfully takes a series of fun self portraits. Lau Ching Wan, despite a dramatically under written role shows real glimpses of the great actor he would go on to become. He somehow provides a grounding to the film, no matter how ridiculous it gets, he's there to anchor it to something approaching reality, no mean feat in this film!

In typical Hong Kong cinema fashion the film wants to have it's cake and eat it in regard to it's mix of genre and tones. Aiming for a delicate balance of romance and action, due to the poorly developed script the mix is decidedly one sided towards the action, which I suppose is at least the right way to lean. The action sequences are brutal, bloody and spectacular, in particular the foot chase after the killing of the Korean boss is incredible and worth seeing the movie for alone. Involving a very busy, multiple lane highway, numerous henchmen and plenty of traffic, it's like pinball with cars and bodies! 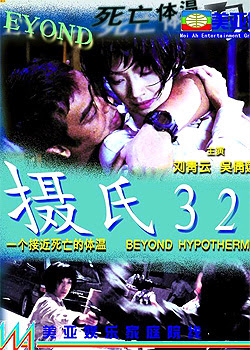 Patrick Leung does a good job here, resisting the temptation to copy his mentor, the violence portrayed here is much more gritty than in Woo's movies, and again considering the weak script Beyond hypothermia is a solid first effort for Milkyway Image. Action wise at least the film is very impressive, not only that but it's an important indicator for where their films would go for the next few years at least. Boasting an impressively downbeat ending that, rather than just being there to subvert expectations is actually earned throughout the film, I mean come on, how else could it play out?
Posted by A hero never dies at 6:30 PM

Very nice Martin!
This one is a very rare film to come by. To has also said that this was an important film for Milkyway. Great to see you had a chance to catch up with it. It would be nice if Milkyway got around releashing some of their older titles.

David, A US dvd exists but it's dubbed into English and apparently isn't great aside from that issue. I have a mainland dvd which is reasonable. It would be great if some of the harder to find titles were re-released, I'm desperate for an improved version of A Hero never dies!

Ty, Thanks, some of the action here is pretty spectacular.

I saw "Beyond Hypothermia" years ago. At the time, the movie left me generally cold (no pun intended). With each passing year though, I find myself having an urge to re-visit it. Maybe some day...

BTW, this film and INTRUDER have been credited with destroying Wu Chien-lien's Hong Kong movie career. Before these films, she was best known for the roles she played in A MOMENT OF ROMANCE and EAT, DRINK, MAN, WOMAN and was a woman many men wanted as their boyfriends... but after BEYOND HYPOTHERMIA and INTRUDER, it seems like she was just too convincing in the scary roles in those movies... ;(

This was my first viewing of the film in around ten years or so, I found it a worth twhile revisit despite it being quite clunky in places, if you do give it another go, I'd love to hear your thoughts.

I remember you saying that about Wu Chien Lien's career in a comment on my Intruder post. It's such a shame as she has real screen presence, something quite rare in Hong Kong female stars these days.

Thanks Martin for the great review. We will get to it soon. So many great tips out here in blogland! Keep it up!

Fortune Star acquired the licence to Beyond Hypothermia, so expect it out on Blu-ray in HK soon...as it's one of the few acquisitions that they've announced that hasn't seen release yet. I suspect, akin to their recent re-release of Armageddon, it will be a BD only release.

Thanks for the info Mike, not sure if that's good news or not, given Fortune Star's record, maybe an anamorphic dvd would be the best option for this film?